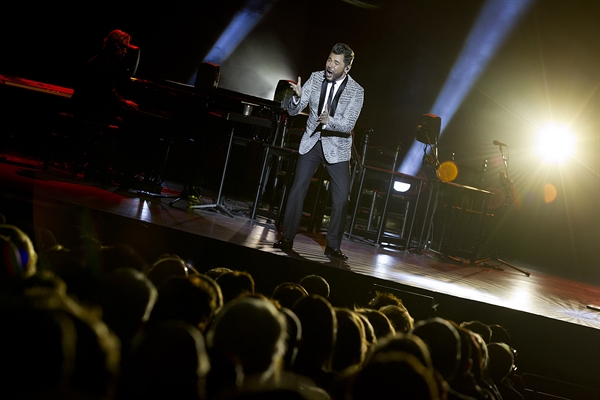 When a tannoy booms out over the sticky-hot concert hall of Malaga’s Cervantes Theatre announcing that the concert will begin in two minutes, the thrill of expectation is tangible. Named for Don Quixote´s creator,  this 19th century theatre located on a marble-paved square hidden in the warren of Malaga’s cobbled backstreets is the fitting setting for the concert of Miguel Poveda, the 42 year old singer who has been described as ‘one of the best flamenco artists of his generation’.

From my ornate four-seater opera box, I stare out over the audience. Every seat facing the narrow proscenium stage is taken, which is a huge tribute from this province where everyone lives and breathes flamenco, and where some of Spain´s greatest artists – ranging from Juan Breva and Paca Aguillera, to La Trini and El Nino de Velez – were born.  When the concert starts there is a sudden hush, which is an even greater tribute from this southern Spanish audience who generally greet every event of their lives at top volume.

The lights lift in a wide fan, illuminating Poveda and his seven piece band. He is small, with fine hands and expressive features. Despite singing with top artists, including Paco de Lucia and Passion Vega, Poveda is a humble artist and before he swings into his first number he tells the audience how much their participation gives him the courage to sing his songs: “Your heart gives my heart strength,” he tells them. They respond with cheers and friendly catcalls asking him to sing this, or that favourite song.

He explains  that there will be three parts to the two-hour show  First he says that he will sing his favourite songs ´because I enjoy doing them.” Next he tell us that he will sing the flamenco numbers and the third act will include several Argentine ballads.

If the first part of the show is enjoyable and the third part polished, the flamenco section is startling in its intensity. I thought that Poveda was sweating because of the 29 centigrade temperatures, but Miguel Poveda is an artist who sweats every line, every movement of the music he sings. When he interprets works by the great poet, Lorca, I don’t need to understand the words in order to   grasp the meaning of these Cante Jondo songs about broken hearts, death and despair – Poveda is like Houdini: a contortionist of flamenco art who wrings every meaning from every syllable and every tremulous note.

As Lorca stipulated in his famous lecture on the subject of Duende: ‘that mysterious power that everyone feels but no philosopher can explain’, Poveda battles with Duende and he surrenders to Duende. Best of all he takes his audience along for a roller coaster ride.