FacebookTweet
The final night of Bestival is drawing in, a glittery crowd is itching to get it's disco on at the main stage area, and a floor sparkling with strewn sequins‎ shimmers in the neon of the bars. The world record breaking giant disco-ball has been hoisted into the air via crane on the Magic Meadow and spotlights sent fragments of‎ light all over the site.
Chic and Nile Rogers ‎take to the stage in a dazzling array of white leather and gold, and Nile almost immediately breaks into tears and tells us "I just found out, we got a phonecall at the hotel room that my old guitar roadie Terry, died a few minutes ago". At this sad news, the Bestival crowd begins to chant Terry's name and cheer on Rogers.
Gaining composure, Nile and the band start strong with 'Everybody Dance' but a few more speakers would be useful behind the sound tent as it's quite quiet for those further back on the hill.‎ The little extras start early as loveheart graphics fill the giant screen and red streamers are shot from a stage cannon, and Nile laments, "I just want to let you guys know… a little bit about why we're here to play for you… a few years ago I was diagnosed with very very aggressive cancer and they thought I might not be here… thank you for giving me the energy", but moves on to lighter subjects with quip "So when you hear us play a song by Madonna, I don't want you to get weird, cause I played that shit in the first place… Mojo… I wrote all that shit"‎ and invites Bestival to sing along, "If you don't know the words, sing any old bullshit it sounds fine up here".
A huge medley of songs Rogers has written or had a hand in creating gets everyone up and dancing with proper disco moves, 'I'm Comin Out' and 'We Are Family' have the entire arena singing and going wild. Many are surprised at the sheer number of songs they know by Nile and the huge dance party is getting rowdier, despite the tired eyes and sore feet on day four of Bestival.
Madonna hit 'Like A Virgin' incites some very amusing camp dancing all over, and Duran Duran favourite (and namesake of the B.I.G.) 'Notorious' ‎go down a storm, but Nile breaks down in tears again for departed friend Terry, and the crowd hold phone screens and lighters aloft in support. Daft Punk summer hit 'Get Lucky' is the song of the night, moving into 'Let's Dance', the hits keep on coming, as giant multicoloured beach balls are released into the crowd. 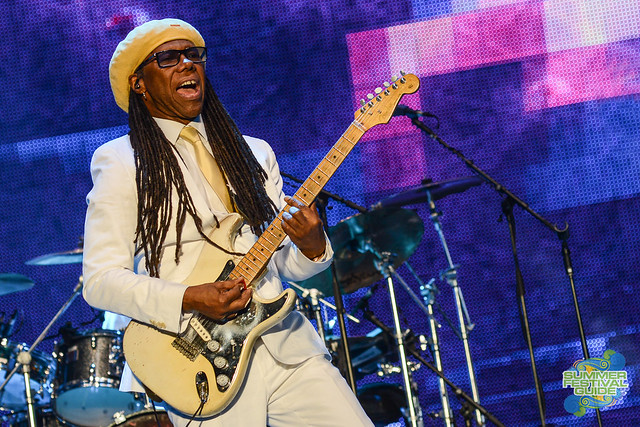 'Freak Out' sees the first explosion of stage fireworks and 'Good Times' is a jam session in which fans are hauled up on stage to join the party as glitter rains from the rafters. With the incredible voices and solid musical ability of Chic, as well as Nile's creative talent across the years, this makes for an amazing and memorable show, a perfect close to Bestival's Desert Island Disco. As Chic and Nile exit the stage, all eyes turn to the hillside where the massive closing ceremony fireworks light up the night sky in a magical goodbye to yet another stellar year here at Robin Hill. Rob Da Bank and co. just seem to know the meaning of party and more importantly, pull it off bigger and better every single time. Waiting a whole year is going to be hard…
FacebookTweet