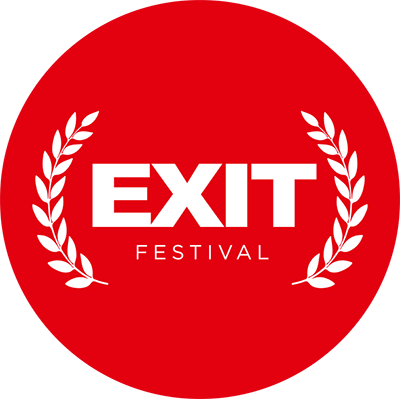 The morning was filled with the soft sound of rain on tent covers. The almost open air tin showers, which the day before had been filled with sweaty travellers washing lay empty and the open air pool seemed slightly desolate under the grey sky.

People sat and chatted and drank beer under the two large gazebo areas, now and again a cheer would rise up but nothing too raucous. The site was muddy and the rain incessant. But the mood was relaxed and comradely.  At 8 o’clock as Horchester took to the main stage they were greeted by sporadically spaced plastic poncho covered people.

However in true EXIT style as the moon began to rise and Serbian soft rock  outfit Van Gogh began their performance slowly and surely the fortress became swollen with people. Van Gogh are known as one of the biggest bands in Serbia, having started their career in the 80’s when the country was still known as Yugoslavia. There were a lot of people singing along and by the end of the set the front section of the crowd were raising their hands and pumping them in time to the beat.

As they finished up and the crowd moved away in different directions to ready themselves for Gloria Gaynor “A Wonderful World” by Louis Armstrong came on while the roadies set up. It was a lovely little soft moment in the rain, people were singing along or dancing slowly with each other cheek to cheek.

Gloria Gaynor kept the good mood going despite the moistness with a casually nuanced performance only an old hand at the game could give. She paced the stage hitting every note easily with a voice still soft like honey, and seemed genuinely happy to be there. People boogied along to the disco beat and sang up the words they knew back at her.

Friday night was arguably the biggest of the weekend, and it seemed as if the entire festival was decanted into the Main Stage area as the lights went up for Rudimental. Their live show didn’t disappoint, even if the squish factor went from medium to high, (both around and on the ground) the mood was electric and every song was a belter. Vocalists Anne Marie Nicholson and Bridgette Amofah brought the noise working their way between them through the whole Rudimenatal’s debut EP with style and panache, while DJ Locksmith kept the crowd upbeat and on their feet throughout the entire set.  The musical collective were as tight as a tiger and it was a pleasure to watch such talented performers have a party on stage to which everyone was invited..

At roughly the same time across at Huawei Fusion Stage, Asian Dub Foundation were also bringing down a banging set, with enthusiastically dancing crow. Ghetto Priest was a beast, and obviously enjoyed getting to use his commanding presence on stage.

There was a point when the speakers blew, which is fair enough considering the amount of noise that was being pumped through them. Someone threw a beer and Chandrasonic gave them an intelligent dressing down, in a softly softly quick fire rap tinged with melancholy about how shit we are to each other. The feel good factor could not be dampened, and when the sound came back on the party started back up in earnest.

Even at 3am with the festival site now a sticky sloppy mess every stage was packed with muddy shoed happy smiling people, the festivities went on till the wee hours with the MTS Dance Arena packed out until 6 am when the sun finally decided to break through the clouds and the die harders making their way back, with raised voices, to the campsite.

EXIT Festival had pulled of another banging evening in the rain.