Wow, where to start? Secret Garden Party blew my mind. After spending seven hours on a coach to get there, which was inevitably delayed, I got into the festival just in the nick of time and met up with my photographer. We’ve done a dozen festivals together and he took me on the short walk to the campsite where I was reacquainted with our trusty festival tent, the nickname of which I probably shouldn’t share, but nonetheless, this sagging, red mess was our dishevelled but not unloved HQ of the next three days and for its part, it did the job.

So bag down, party gear on, we headed into the festival proper. Our first port of call was the Fox, a giant, hay-filled canid used several times thereafter as a meeting point for lost friends. Atop its tail, during several conversations with excited randomers, I got my first real inclination of the scale and atmosphere and it was impressive, but at that point I had seen nothing.

Our first taste of action was Little Dragon on the Great Stage where thousands were crammed in to take in the surreal sounds of the Swedish synth-pop veterans. It was here that we met our extended group and after we made our way back towards the main area of the festival to take in more of the mise en scene: all kinds of different bars and hang-outs, food vans, huts, shacks, bars, art installations and of course people; lots of people.

“Are those people hanging from the ceiling?”

The next two acts we saw took us by great surprise as they were two of our favourites and yet we hadn’t even realised they were on the lineup. We noticed the familiar gait of Skream silhouetted against a constantly pulsing, fractal visualisation behind him. Then straight off the back of that the MC announced the arrival on stage of none other than DJ EZ who eased us in with some UKG classics before showcasing his flair on the ones and twos, bringing dirtier, grimier sounds to a packed crowd of willing skankers at the Drop, plus a gratuitous three minutes of ‘Deep Inside’. 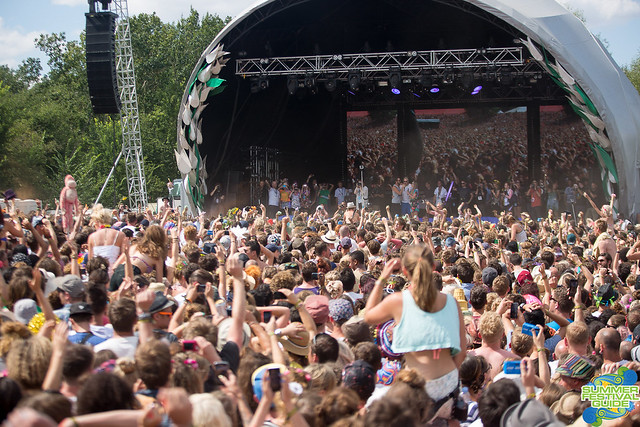 I rated SGP highly already. I came to the festival with a head full of names, my top DJs and artists and everyone who I’d planned to see but what I hadn’t bargained for was the rest of the festival experience being so fun. I could have stayed there for a week. Under the dark, expansive sky, bright lights shone and big beats rumbled; a different vibe around every corner. I got my first taste of the Drop coming from the back end and the way the wooden overhangs looked over the arena – like the wall around a fort – meant that the excitement of what I had in store over the next couple of days was growing with every moment.

As the house beats rolled and the visuals evolved, surrounded by trees, lakes and these wooden platforms, the revelry atmosphere was almost spiritual. Gas canisters lined the floor, we danced on hay bales as night turned into day and the sun came up to techno rhythms. I got to see the festival in a completely new light and it was from this point that I got to fully appreciate the size and effort SGP had put into every single detail. Friends that had been before told me that in fact this year had been scaled back slightly and there were a few things missing and I remember thinking there wasn’t really anything I could imagine being better.

Then came Saturday. All the days blurred into each other, so much overlap – the hallmark of any good festival – but there are distinct parts of each day which makes it impossible to pick a favourite. Saturday started with a walk to the lake where we sat by a cloud on the shaded banks. I could’ve stayed there all day, it was idyllic. We had a picnic, of sorts, and drank happily in the summer heat, the sound of Spitfires swooping above and balloons here there and everywhere.

Most of our group were SGP veterans, unlike my photographer and I who were straight up virgins to the Huntingdon festival, so I was happy to take their lead and they assured that the next stop was the Pagoda. The queue was huge and I couldn’t really see what all the fuss was about. Then our time came and on we got in, a floating stage on the edge of the lake in full sun with banging, hypnotic house and techno. The Pagoda was unbelievable, packed full of likeminded ravers, intermittent squirts of Super-Soakers and scantily clad, golden goddesses. We raved there for hours before heading back to campsite in the evening to recharge our batteries. This where my lack of sleep caught up with me.

Yeah I flopped on the fireworks which I was naturally wounded about. I sat down for a rest about 9pm and came-to in a tent around 1am. What I was playing at I don’t know, but I can tell you what everyone told me and that was I was an idiot for missing them and to be fair, the photos looked incredible; and I have it on good authority that Public Enemy smashed it shortly after, just like they had at Parklife when I saw them earlier in the year. 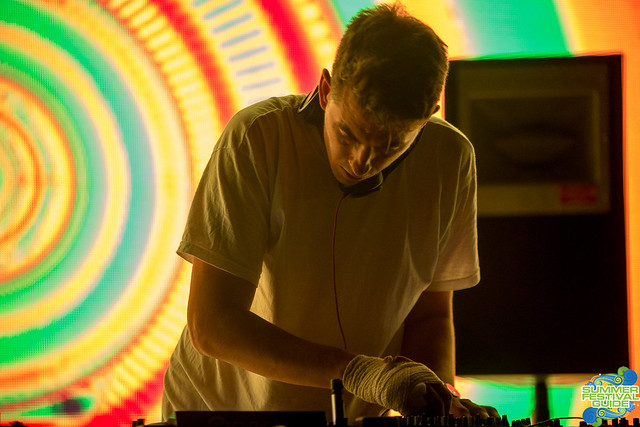 When I woke up, alone at the campsite, with a phone with no battery I set forth into the festival to find someone, anyone. Our group was led by the high leader Larry whose bright, yellow face you could pick out of a crowd from any distance; Larry was a flag. But after two hours of looking for my compadres – while simultaneously dancing ruts into the ground as I circled the Drop, Temple of Boom and everywhere in between – I decided probably just to make some new ones; and so I did. A bold claim maybe, but I think SGP had the best crowd I’ve ever seen (aside from one or two goblins and Technicolor madmen) and even the brief but fierce rainstorm couldn’t dampen my spirits.

I managed to find the crew just in time to see Route 94 at the Drop and when he brought in ‘My Love’ just as the sun was rising up, followed by his remix of ‘Fly 4 Life’, it was going off; that was until the technician told him to pack it in and (light-hearted?) boos rang round the venue.

After that I found myself on my own again, in a peculiar little tent in the early hours with fiddlers three and all kinds of mad ukuleles and mad, eccentric instruments being strummed, plucked and banged. I sat on a bench and a man in a fez carrying a violin pulled apart the curtains that formed the wall and sat down next to me. We sipped (“proper”) cognac and chatted at length about all sorts, then all of a sudden he popped up and said “oh I’ve gotta play now,” and off he went onto the stage.

SGP is the first festival I’ve been to where the place itself was more impressive than the music. There were bars hidden in secret wooded paths. You could go through a wardrobe in a fence and into Narnia, with snow-covered paths and its own ice rink and a toilet cubicle through which was a field of six-foot sunflowers and various specimens of wristband-wearing flora and fauna. Hay bales stacked 20 feet high with hologrammatic faces singed into them, fire pits, rolling fields, soft hillsides and ponds and lakes surround you; believe me I’m going back next year.

“It’s going off in these glasses”

Sunday came and it was a dream. Off we went again to the cloud by the lake and lay in the sun, swigging Kopparbergs like they were going out of fashion. We got to the Great Stage to see the Correspondents tear it up – another hot tip from the regulars – then we had the paint fight. If you’ve never been in a paint fight with tens of thousands of people, I’m inclined to say you’ve never been to a proper festival, but then again that wouldn’t be fair.

Cannons of dry paint, fireworks cracking in the sky, grenades of powdered blue and red tossed back and forth between the two sides and no one left unscathed. Everyone was covered in dry paint, gold glitter and all kinds of festival wear and tear as ‘Jump Around’ blasted out across the heavily populated fields and hills. David Rodigan was next to do his thing, with sweet reggae music pumped loud from the Funktion Ones, followed by more bass-heavy sounds from Fat Freddy’s Drop in probably the most chilled environ possible. 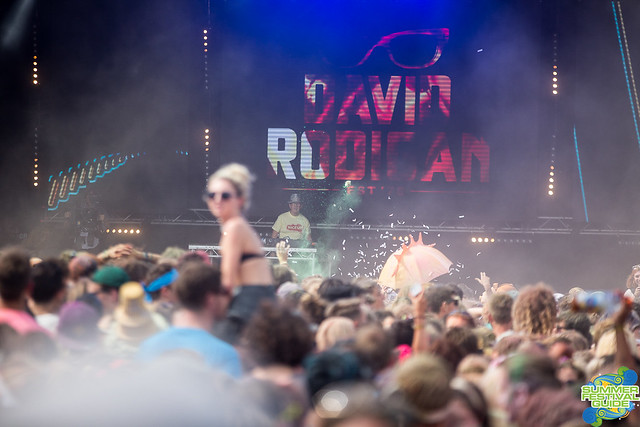 The rest of Sunday was spent exclusively at the Drop with b2b sets from the likes of Joy Orbison, Optimo and Jackmaster. In between pounding four-four beats and intangible vocal whirls came classics like ‘Sugar is Sweeter’, timed to perfection – this was heaven for me. There’s something about house music that never ceases to amaze me and I found myself in awe at times wondering how the DJ was gonna play himself out of this tune or that tune, but they always did.

Rather than go out with a bang however, the music fizzled out around midnight and we were left to collect ourselves and head back to the campsite. Somewhere in the distance lightening filled the sky, like one final goodbye, and that for me was the end of Secret Garden Party.