Global Gathering the festival that sets the benchmark for Top Dance festivals in the UK is back this year at the prestigious long maston airfield in Stratford Upon Avon. This festival goes back 14th year and has won many previous awards for Best Dance Festival. DJ mag were responsible for naming this baby giant and it has always lived up to the name year after year.

2014’s headliners are set to be big with the likes of Prodigy heading up the main stage on Saturday evening and Chase & Status on Friday . Global is set on Long Maston Airfield giving it a post apocalyptic and industrial feel. The stages here are of true brilliance and are by far one of the best parts of the festival, with unique simplicity stages like The Global Freight Depot and the Bunker always turn a DJs set to stun. 2014 at Global Gathering brought a number of tents such as the returning BBC 1XTRA stage , the futuristic GodsKitchen , UKF Stage , The mighty new Hanger arena and Defected in the House along with many more smaller stages dotted around the landing strip.

Taking the main stage just before sunset, the 25 year old Belgian known as NetSky took the crowd by storm to give them the injection of pure energy, while the hot orange glow of the afternoon sun dropped into the hills around the airfield gearing up the masses ready for the headliners that evening. Playing some of his new material like ‘ Running Low’  due to be released inside a new album sometime this year and available to listen to via the official Youtube channel for NetSky.

Dusk is here and its time for the ever powerful electronic sounds of Chase & Status. Production and stage precedence this year made for an incredible set from the two British Producers Saul Milton (Chase) and Mr Will Kennard (Status) playing all the big tracks such as ‘Time’ Feat Delilah as well as ‘Take me away’ To fit in with all the base and hands in the air what finale would be complete without lasers and fireworks. Exploding to the sounds of ‘Fool yourself’ lighting the crowd for the final time that day and completing what was a truly perfect hot summers day.

Clearing the main stage theres still plenty going on and depending on your music palette you can head to a range of different artists and stages. Heading up the Hanger stage in the after hours the chart topping David Guetta performs at the top of the towering wall of light situated in this oversized super tent. This stage would rival many main stages and despite its size was full to the edges. If Guetta isn't for you though don't worry you've got visual delight of Subfocus sitting proud amongst the giant rings of light over at the 1Xtra Stage. Happening all around the top DJs like Aly & Fila , Hot Since 82 , James Zabiela, Alesso and so many more converge for 1.5 days worth of pure magic.

Waking up to yet more sun beating down on the masses the day was off to a great start. Global is an action packed weekend with little down time. Acts are on from 12 mid-day and go all the way into the wee hours of Sunday morning. The main stage started to fill out early afternoon with the masked DJ Jaguar Skills. Next to entice the masses was the RAM Records Heavy weight Andy C & MC 2SHY, seeing Andy perform in sunlight was a strange experience as normally confined to the early hours of a set list. Never the less a set filled with all the right tracks including the Andy C Remix ‘Get Free’ with all the heat and pumping base the security were constantly handing out a good supply of water to the crowd and making sure anyone who needed fluids got a drink of water. 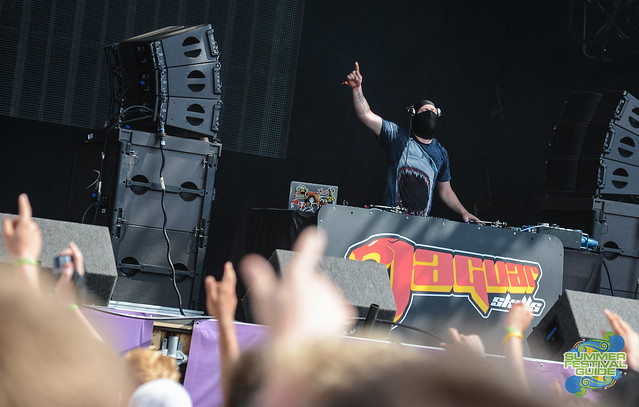 Leading on to the penultimate act of the day Knife party were set to get the crowds ready for the headline act. Sitting behind a pretty impressive LED Bank located centre stage Knife party originally formed of Rob Swire and Gareth McGrillen which you might remember from The Drum & Bass superstars Pendulum, Knife party was a side project that went main stream.

To Headline this year Global Gathering pulled out the stops for one of the biggest most widely known electronica big beat acts around. Prodigy are a phenomenal act to witness and had great little surprises through the set. Red flares lit at certain points within songs like Fire Starter and ‘ Smack your bitch up’ illuminating the crowds hands and a sea of iPhones and mobile phones taking video could be seen. Keith Flint lead for Prodigy got the crowds running in circles at 3 points within the main area creating a tornado of people all under his control. The stage consisted of a semi circle of tribal symbols and lights, flickering stage lights to imitate fire and plenty of disorienting strobes to give it that truly cereal experience! All the original hits previous mentioned as well as ‘ Their Law’ including the new creations from Invaders Must Die, singing along to OMEN the atmosphere and energy was relentless. Global Gathering as a festival is truly a one off masterpiece and to its credit has survived and battled its way through the financial crisis and out the other side its 14 incredible years are a testament to its amazing DJs, stages and organisation. 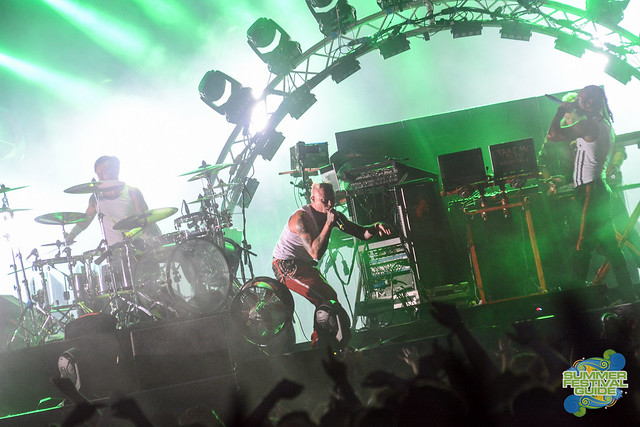