After pottering about the arena to see some of the other sites (mainly the dressed up  festival goers, including Mario Kart), Decade played the Slammer to an unfortunately empty crowd of about 30 people. However, this didn’t mean that they didn’t give it their all as they asked the crowd who had seen them before, or even heard of them, to which 3 people responded. Should the crowd of been bigger, then the atmosphere would have been incredible. Unfortunately, this was completely the wrong festival for them to play.

Astroid Boys played on the Main Stage attracting a decently sized crowd with the warehouse being a third full. However, although it wasn’t full, when the crowd were asked to chant the other half to “Olly Olly Olly”, to which the sound of the crowd chanting “oi oi oi” filled the venue. The vocals of the band were extremely on point, with the two vocalists both bouncing off of each other with tremendous results. The crowd seemed ever so pleased to have them play as most people who attended were fans, singing along to all of the words and cheering with roars at the end of each song.

Blitz Kids received a disappointing crowd in The Slammer with only 20 people turning up to their show. Whether it was because they didn’t fit into the line-up well as most people playing on that stage didn’t, or they just wasn’t known too well to many, they deserved a lot more than what they were given. Playing songs from their new album ‘The Good Youth’ they did lure in a few more people as the set went on. However, guitarist Jono Yates didn’t let this phase them as he bantered about there being “thousands” of people out there, but the tent being too “dark and poorly lit” for them to see all of the crowd. Nevertheless, they performed to their full potential and created a brilliant show to people who may not of heard of them before, therefore hopefully creating a name for themselves to the people who hadn’t heard of them before. With dedicating songs to the drink Hooch, they clearly weren’t affected by the lack of turn out as they later went on about how they were getting free beer for performing, although it was Carlsberg, so it may as well of been piss. Finishing with On My Own, they clearly felt the wrath of the small crowd as the song is normally one to attract a lot of audience interaction with the crowd singing along, this didn’t happen. Frontman Joe James didn’t let this phase him as he was still more than content to give it his all and climb and hang off the pole that was directly in front of him, and sing passionately to it.

On the Main Stage Skindred collected a rather large crowd with their set being incredibly interactive with the audience as they ridiculed the crowd for being like the French as frontman Benji Webbe shouted to the crowd “Is this NASS? ‘Cause you’re acting like a bunch of French cunts” before thanking everyone for attending with “I wanna see your fucking horns. Rock and Roll isn’t about Youtube, so thanks for coming to the concert and supporting live music, rather than sitting behind your computer screens sitting on your own.” The Reggae Nu Metal band lifted the roof with their incredible iconic songs to which the audience responded immensely too, with fists pumping, moshes breaking out and a lot of singing occurring. A phenomenal addition to the Line-Up, who really set the standards for the people following that night.

Reel Big Fish followed on the Main Stage where their Ska Punk sound half-filled the warehouse where they sang about everyone else besides the crowd being Assholes, to which the audience roared the lyrics back to them. The Brass instruments in the band really brought forward the performance as it was something that wasn’t going to be seen anywhere else at the festival. With the whole performance being incredibly laid back and banter-filled, it fitted in quite nicely with the whole atmosphere of the festival.

Gallows headlined The Slammer, and there couldn’t have been a better way to close that tent for the weekend. Vocalist Wade MacNeil started the set with jumping over the barrier to join the crowd and bring them closer together. Joining in with the mosh and circle pits and encouraging the ‘skinhead’ to sing into the microphone with him. After 5 songs he joined the rest of the band on stage and shouted down the microphone for everyone to draw in and go closer even though “the big skinhead looks scary, he won’t bite, he’s clearly just a big teddy bear” to which the audience chanted “We love you Gallows, We do” which showed that during the festival there was definitely some metal heads which were looking forward to the set, even if the tent was still only half full. As previously stated, to get a crowd at NASS when part of the Rock/Metal scene was quite an achievement, therefore when MacNeil thanked the crowd for turning up and enjoying the music with them, you could tell that it was sincere.

Wilkinson headlined the Main Stage and it was the greatest end to the weekend. The lightshow, crowd and general atmosphere really showed that the weekend went off with complete success. Wilkinson played his new song “Dirty Love” which received such a great response with the crowd as everyone was dancing and going absolutely mental. Even the security guards (who were the best security I’ve ever seen at a festival) were tapping their feet and really enjoying the set and atmosphere. With the crowd growing, but still not filling the warehouse, it was clear that they were an act that people were excited to see. 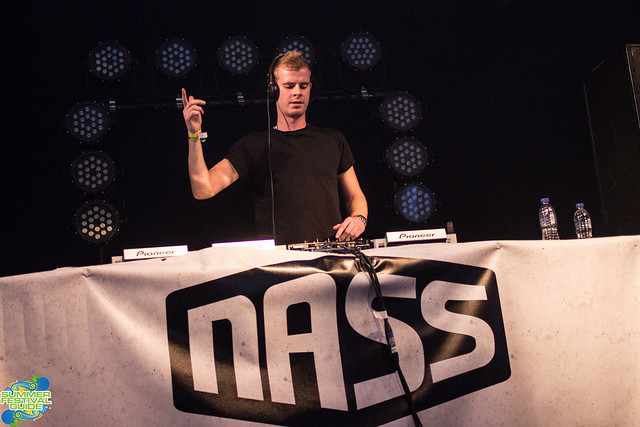 Overall the weekend was such a success. Everyone seemed to enjoy the festival and although police and medics were scattered about every couple of hundred feet, it meant that major accidents didn’t occur and everyone was safe, besides the incredible drug intake of most there.