As the sweltering heat filled the whole of the site, everyone was eager to get into the showers which were scattered throughout the site,  which one festival goer seemed especially happy when walking out of one of the blocks and seeing the hairdryer and straighteners stall situated next to it as she excitedly told all of her peers.

With most acts not starting until late, the first band to play that caught peoples eye was Slaves on ‘The Slammer’ stage. With the two piece Royal Blood alike band, glided onto the stage with pride and with one in an interesting outfit, which resembled pyjamas. With the festival predominantly being an EDM/Dubstep festival, the Rock bands weren’t receiving a great reception, as there was a crowd of possibly 40 people in the tent, if that. However, this didn’t stump their performance as the quirky duo still entertained the crowd with their questioning of what NASS means, which lead onto ‘Nescafart’ and ‘Farty coffees’ which pleased the crowd as a few chuckles spread here and there. Should the crowd of been larger, then the atmosphere would have been incredible, as they carried out a performance to the greatest of their potential, despite receiving little from the minute crowd there.

Sonic Boom Six played The Slammer next, and with the gum-chewing female vocalist bouncing onto the stage in a bra-let and patterned leggings. As the crowd was filling up about a third of the tent, it was a shock to still see people joining the band in there as it wasn’t expected. The energetic front woman was punching the air between her outstanding vocals which formed excellent harmonies with the male vocalist of the band. An excellent set from an extremely underestimated band.

Despite the glorious weather earlier on in the day, once it hit 6pm the rain was flooding down, causing the outdoor skateboarding qualifiers to be postponed until Sunday.

As the rain was still coming down a little bit, The Bronx came on to the Main Stage, with a decently sized crowd welcoming them. Despite not entirely fitting into the line-up, it didn’t mean that they didn’t give it their all, even with bassist troubles at the beginning of their set. With an extremely energetic photographer almost egging on the crowd who could see him, the band was excellently received as there didn’t seem to be one person who didn’t enjoy it!

Cypress Hill received an overwhelming response by the whole of the festival, with the Main Stage filling out causing the queue to get in being over an hour long and ultimately being closed off. With the act definitely being lower down on the line-up as they should have been, they created an insane atmosphere throughout the whole of the crowd. The crowd joined in with the chant of “if I say Cypress you say Hill” to an extraordinary volume which overpowered the backing track. 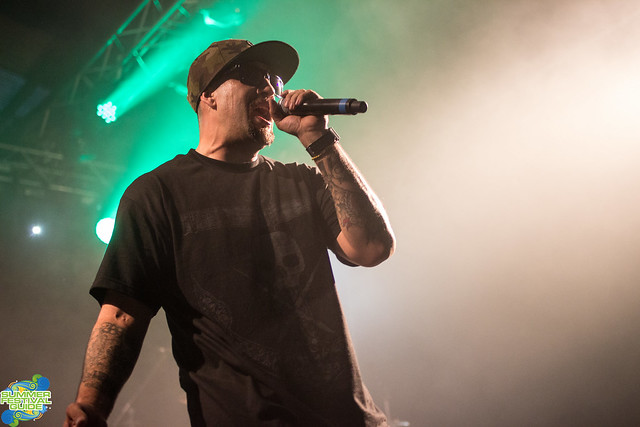 Funeral For A Friend received a full crowd for their headlining set in The Slammer as everyone headed over to see them due to the queue to see Cypress Hill and the rain. An unfortunate reason to have a crowd, but nonetheless, they still welcomed everyone there and potentially gained some new fans outside of their genre. At the start of the set Frontman matt Davies-Kreyes vocals seemed to be weak, however as the crowd grew and the set went on, his vocals dramatically improved. The thankful frontman threw out a speech thanking the crowd for spending time with “the granddads of the emo movement” rather than Cypress Hill, to which a failed crowd surf followed. The alcohol fuelled mosh and circle pits were continuous throughout the whole set, which unfortunately, included crowd killing as well. However, although everyone was out of their face, it didn’t stop everyone looking after each other if someone fell on the floor, which unfortunately did include myself as a result of a group of guys crowd killing, yet six people helped me to get back up, which restored the faith of everyone in the crowd. With the frontman asking everyone to sing because “I’ve got a fucking stitch”, everyone seemed more than happy to help. Interestingly and absolutely brilliantly, at the end of their last song, a 50+ woman who had been moshing all night, jumped the barrier and joined the band on stage before being escorted off by the security that had jolted to remove her from the stage.