Any Brits who were hoping the fact they had come to a European festival meant they would escape the incessant rain that sometimes besets those based in the UK had their dreams dramatically shattered as lighting began to strike above the Petrovaradin fortress a few hours before EXIT’s main gates opened. Festival go-oers went wet t-shirted to and fro between the ticket office outside the entrance and the EXIT VILLAGE campsite in a small park nestled between a busy main road and towering suburban apartment blocks. Residents looked out over their balconies possibly bemused as tents sprung up forming a carpet of synthetic canvass. 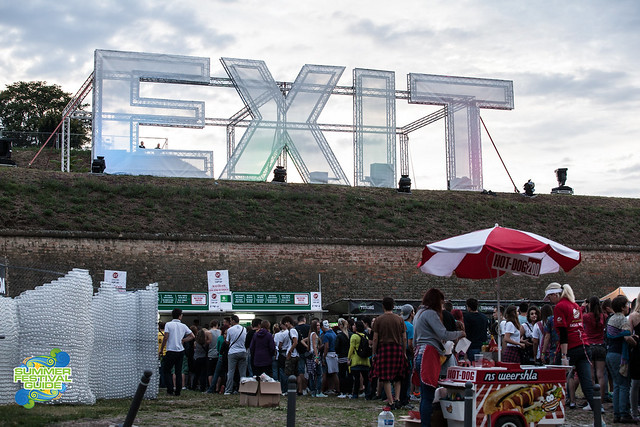 The reason for the move away from the traditional campsite on the banks of the Danube are unsure, possibly due to excess mess or lack of space in previous years, or perhaps the risk of flooding from the river (the organisers may have somehow predicted the weather). To me it seemed strange to encourage an overflow of tourists closer to the city center, especially as EXIT’s programme goes on late into the evening (the last DJ set starts at 6.30am), meaning there is a steady stream of people making there way back through the city (possibly merry) well into the morning. But then again this may be to bring more money into the city itself and provide campers with more facilities closer to hand, as the campsite is situated next to a mall with cafés, shops, restaurants, a swimming pool and a supermarket, as well as having a small street of food vendors inside the EXIT VILLAGE itself.

The walk takes about 40 mins but only a 10 to 15 minute bus ride, and for those on a western European budget there were representatives selling fairly cheap weekly bus passes for around 6 Euros at the train station and the campsite. Although the buses tail off around 1am there is a steady flow of taxis after this surrounding the venue which cost around 500 dinar (about 4 euros) for a ride back to the camp. 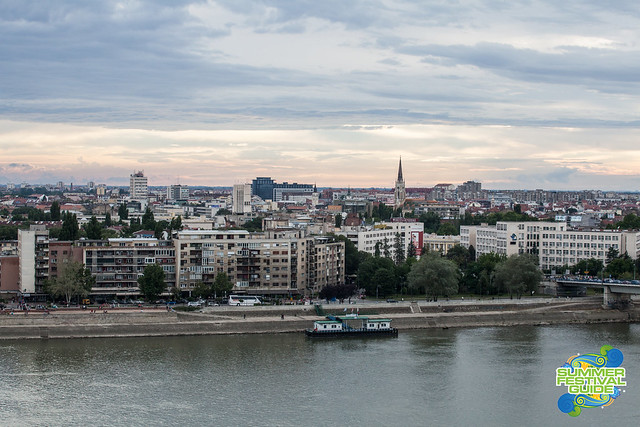 Fortunately the deluge was short lived and clouds cleared as people began to stream through the gates past the rather heavily armed Serbian security to the sight of a glorious sunset over the city of Novi Sad.

The show was kicked off on the main stage with some smooth reggae from Hornsman Coyote which the gathering crowd seemed to enjoy, followed by the Energy Opening by Balkanopolis. Their set consisted of an engaging performance from Renaiszance who played their single “ I Will Rise” accompanied rather effectively with visuals taken from the graphic novel The Inventor: The Story of Tesla based on the life of famous Serbian inventor NikolaTesla, as well as an uplifting act of semi traditional Serbian music using a variety instruments including a form of local bagpipes made out of the body of the goat. The crowd began to dance around the rather deep puddle that had formed treacherously close to the main stage as the finale including aerial silks came to a close. 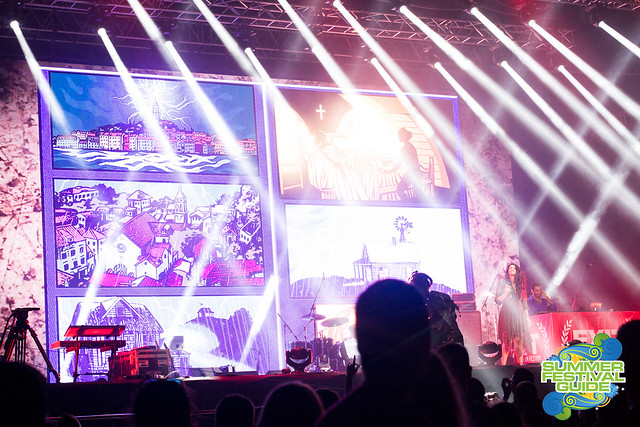 When it was finally dark it was the turn of Belgian music maestro Stromae to take to the stage in an arresting and pitch perfect performance that had the Serbian and European crowd singing along in French with gusto.

Stromae used all of his charisma as well as beautifully paletted video backdrops to get the audience below him to raise their hands in the air and bounce around without ever having to request it. He was a fascinating performer to watch live with his cartoon like facial expressions and physical flourishes while managing somehow to make a school boy style of long shorts, socks and cardigans look cool.

This was arguably the busiest point of the evening and as The Pet Shop Boys prepared to take to the stage the crowd thinned out to a more chilled out volume while they strutted and sang through modern classics as well as new mixes. Neil Tenant sported a fascinating variety of head wear including the infamous Disco ball and a post modern metal mask in the shape of the cow’s head, which was complimented by the cow skulls and wigs that both the  live and pre recorded backing dancers sported to creepy effect. As the night progressed and came to a close people spread out to the various other smaller stages dotted around the venue to sip beer and smoke cigarettes while lying in hammocks. The genre of music was varied so that there was something to be found for everyone, and despite being the first night of a major festival the atmosphere was relaxed and happy, the most common sight to be seen was people dancing and smiling with their eyes close, whether that be Dub by Dimension, Heavy metal, or Flamenco dancers at the Latino Stage. EXIT festival had officially begun.