First up on the elite list of larger festivals this summer was the Isle of Wight Festival. It was a rousing success all around, promising a vast array of acts to be seen, with what happened to be bright & consistent weather to make it that bit better. It was an event where as the adverts promoting the festival said, you simply had to ‘be there’. 50,000 festival-goers agreed & took the advice, making their way across the Solent on whatever method of boat travel they could find, camping gear at the ready. The festival is one of the few in the UK that has the most varied mix of musicians performing, from Red Hot Chilli Peppers & Kings of Leon to Cher Lloyd & Dappy, with Boy George in between. You get the picture.

On Day 1, it was the Thursday performance of the ever-exuberant & flamboyant Boy George whose soulful-sing-alongs propelled the early festival-goers into a flashback to the 80’s with hits such as his old band Culture Club’s ‘Karma Chameleon’ & ‘Do You Really Want To Hurt Me?’. The crowd most definitely didn’t want to cause any harm to the hit-maker, they loved his cheerful disposition & playful interaction with the clearly pleased audience.

On the Friday, it was up to the Scottish folk of Biffy Clyro & Calvin Harris to step up to the act of being headliners, & each did it spectacularly. Over the years we have gradually seen Biffy Clyro head further up the festival posters with their name getting bigger & bolder each time. In an explosive 90 minute set that clearly included a very talented technical team, the stage at times became a pyrotechnical dream- ablaze with fireworks & glitter, raging riffs and hard-hitting sentimental lyrics- something of a rarity some might say in rock music. Coming on stage at 9pm, it would have been better to see the visual impact of the display had they not performed in the daylight. 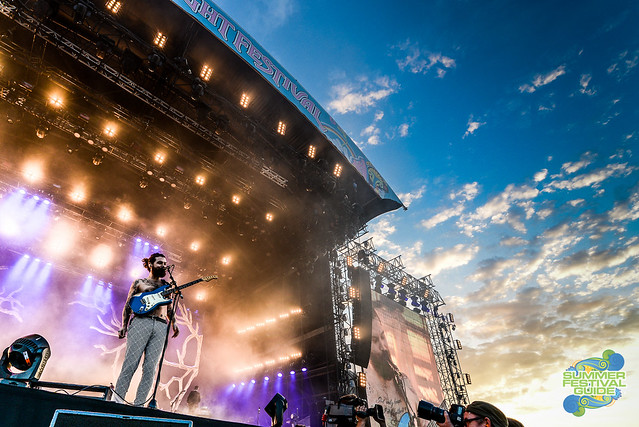 London based quartet Rudimental have had phenomenal success in the UK for a band with just the one album under their belts, but so it seems, they prove one album is all it takes. 2012’s album release ‘Home’ certainly brought home the goods for the audience who were treated to a mix of drum’n’bass, soul, & funk with added backing vocalists, rousing drums & a trumpet thrown in for good measure to add to the party. Hits like ‘Feel The Love’ really brought the crowd together, & with excellent crowd interaction from the band it was a magical moment for the audience, who made their hands into a heart sign throughout the feel-good song, drunk festival-goers included, some attempts looking more blob shaped than heart shaped.

Hit-maker Calvin Harris closed Friday night in the coveted final slot of the main stage. Mr Harris has ploughed up to immeasurable amounts of success with the record-breaking album ’18 months’, & his large spectrum of collaborations has been the real ingredient to his popularity with dance fans around the world. During his DJ set, robust vocals from Rihanna to Florence Welch could be heard to name a few, with smoke machines & laser lights beaming out onto the euphoric crowd. A remix of last year’s headliners The Killers- ‘When You Were Young’ was played to add an element of surprise to the set, otherwise it may have been abit too predictable, he has been very busy performing over the past few years & a lot of his sets have been televised after all. All in all, a spectacular set from the Scottish DJ.

Away from the main stage there was talent to be seen in the Big Top stage, in the form of uber-cool Katy B. Belting out hits into the humid Isle of Wight air from acclaimed album ‘Little Red’ with striking synths throughout, Katy reminded us why she’s a sell-out in both gigs & album sales with a brilliant mix of stage presence, crowd interaction & electronic-infused songs that made a brilliant set list.

Saturday’s at festivals are always the big ones. Halfway through so you sort of feel disappointed it’s half over already, & then you remember the great bill ahead of you on Saturday morning & don’t feel so bad after all. The weather was a lot cooler, which some might say is a good thing, but those clear blue skies had diminished. Non-the-less, the vibe of the festival was still upbeat, with festival-goers saying they were enjoying themselves. The Waterboys made an appearance to fill in the unusually seen genre of Irish folk at the festival, & merrily played uplifting songs such as ‘Fisherman’s Blues’ & ‘Whole Of The Moon’, using less commonly seen instruments such as fiddles, violins & harmonicas, it was a refreshing change. I’d liked to have seen more interaction, but it may have been they were not used to main stage slots at large festivals & felt slightly overwhelmed. 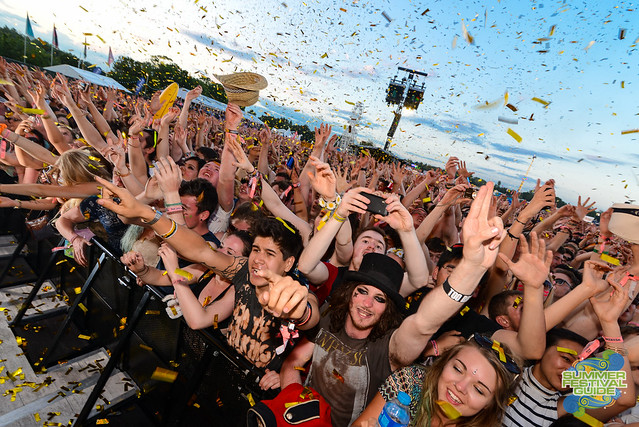 Next up was the fabulous John Newman, a man with motown, retro RnB & soul in his (very) dancing feet. A brilliant blend of upbeat tap-your-toes songs combined with melancholy-filled ballads about heartbreak, he packed a lot in to the 40 minute slot that brought the audience almost on an emotional journey, some feeling the obvious meanings of the songs to Newman. When he left the stage you couldn’t help but want an encore, but like the band that made him famous, Rudimental, he too has one album to his name, but in a few years’ time I can see him doing longer & more varied sets with big-name collaborator’s perhaps joining him on stage. The crowd pleasing summer anthem from last year ‘Love Me Again’ was the right song to choose to end an excellent & energy-filled set.

Later on was the band thousands had travelled high, low & far away for. After a seven year hiatus from performing at a festival in the UK, Californian based Red Hot Chili Peppers made a triumphant return. Eccentrically bounding around the stage playing universally-known hits such as ‘Can’t Stop’ & ‘By The Way’, their energised performance made the crowd go wild at times, exactly what a classic rock band who headlines should do. From lead singer Kiedis’s rap-singing in parts to the funk-infused riffs, it was a you had to be there set, & those who were torn between the headliners & the world cup England match made the right choice if they avoided the later. (A match they lost anyway!). Perhaps what made this set so enjoyable clearly by both the band & crowd was the fact that it was something of a rarity & they aren’t regulars. That’s what made it so anticipated, & overall, the Chili’s certainly didn’t disappoint. Although arriving 15 minutes late & not playing ‘Under The Bridge’ may have put a downer on some, perhaps some will wonder if that lateness contributed to them not playing the iconic song, but speculate or not, it was a superb set, & one can hope they can start planning a UK tour soon. 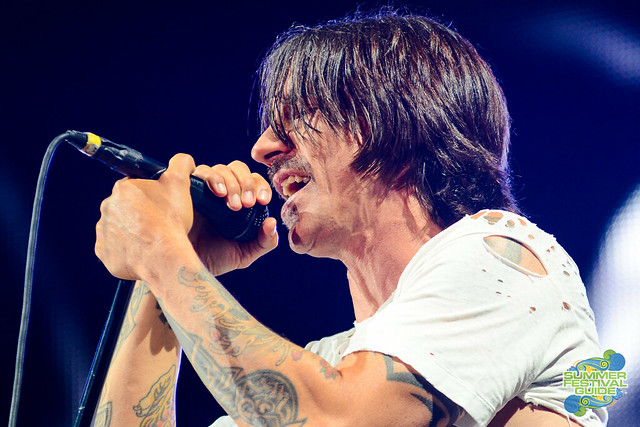 On the final day of the festival, we were all treated to a performance from the red arrows. Causing a load of colourful synchronized smoke to grace the skies, it was a few moments where you saw more necks than faces from people looking up in wonderment, only to then get back to the hustle & bustle of the festival deciding on where & what to see next. The final headline performance was from festival regulars Kings of Leon, clearly an expert in this field, quite literally, from their vast experience of festival performances. Playing hits from their six studio albums to date, from up-tempo songs like ‘Supersoaker’ & ‘Fans’ to the obvious major hits like ‘Sex on fire’ & ‘Use Somebody.’ Caleb Followill’s yowl gave raw intensity to the set, with an added genius moment of guitarist Matthew Followill playing the opening riff of more mid-paced track ‘Closer’ with his teeth. As the final song of the festival came to an end, arms were put around each other, & appreciation was obvious for Kings of Leon with cheering & clapping echoing around the stage & beyond. Now it was time to get back to tents, & our ones.

After a long weekend of music, rides, balloons, bubbles being blown, alcohol, a surprisingly good selection of food, & seeing people dressed up in odd unusual costumes, it was time to pack up & go. The Isle of Wight Festival is so worth the travel from afar if you live miles away like I do, it’s one of the very few festivals where you really feel like it’s worth every penny with the high amount of quality bandssingers your seeing. After this year’s success, Isle of Wight Festival 2015 will have a lot of living up to do, organisers best get planning!