I dressed for rain and lightening as i left my house for Victoria Park. Field Day would be my first taste of festival. The sun burned down on my super cool VIP wrist band as i rushed through the park to the Crack Magazine stage to catch the last few songs of Thursten Moore, the sonic youth God.

This was the beginning of a long day, of walking to and throw. Of losing friends and meeting nice Irish men who buy you sambuca shots. I feasted my eyes on stalls of food from every cuisine; animal carcuses next to The Buddah Bowl which served and absolutely divine bowl of rice and something. With no money in my pocket, i had to resign myself to the spoonful i was offered from the bottom of my pals bowl. I walked past fair ground rides and adults playing tug of war surrounded by hay bails. There was so much going on that i became overwhelmed, and as time flew by me i couldnt even recall what i had been doing since i arrived. The sun began to set as i sat on a plastic covered ground to hear Metronomy play out over their zillion fans. It was soon to be the set that i had been waiting for.

The summer ale had gone to my headm as i stumbled through the darkness to find the stage. Red light shone through clouds of of smoke over a sea of figures and the band above. Tailored black trousers and a temporary shirtm towered above me and sung what i’d been waiting to hear. Fat White Family were before me, I had been waiting to see them perform and their presence on stage was surreal. Shrouded beneath the huge tent, encroached by darkness and a chanting croud. It had the feeling of a cult, a gathering of of believers waiting to hear the voice of their leader in the hope of hearing something divine. A skinny half naked preacher stood before them through war-like red smoke, his convulsing body moving back and forth while belting out the words of his heart.

The set ended to screams of encore, to no availm as the band were to later play at The Shacklewell Arms. The first day ended as part of a slow walking mass, silhuettes passing out of the gates and into the empty night. Victoria Park lit up ahead like  beams from the stars, over a scattered sea of noise and sweat covered flesh.

Sunday played host to some amazing up and coming artists, with The Pixies bringing home with their headline slot at 9.30pm.  The day begain with Brighton based band The Wytches opening on the Main stage. Their performance was raw and unpretentious, a beautiful screaching voice through parted brown locks and striped tee. Looking backm they were my favourite set of the day. Temples followed with glittered face and psych sounds that flowed in waves over the heat stroke croud. I rushed across to catch the end of Telegram, a London based band who i caught their first few gigs at the Shacklewell and the Old Blue Last in mid 2013. They have been doing super well, releasing their amazing single ‘Follow’ as well as touring with numerous well known bands throughout the Uk. Their set was really great, vocalist Matt Saunders filled the tent with his deep, powerful voice that bellowed over drums pounded by the fierce, fragile frame of drummer Jordan.

The Horrors had the main stage before The Pixies. Playing Field Day as the first in a string of european gigs and festival dates this year, touring their recently released album ‘Luminous’.  The croud filed in to see and hold their spots, the glare of the sun bouncing of pale shoulders, beer cans and lost on the grass beneath thousands of feet. Their performance was great as expected of these boys. 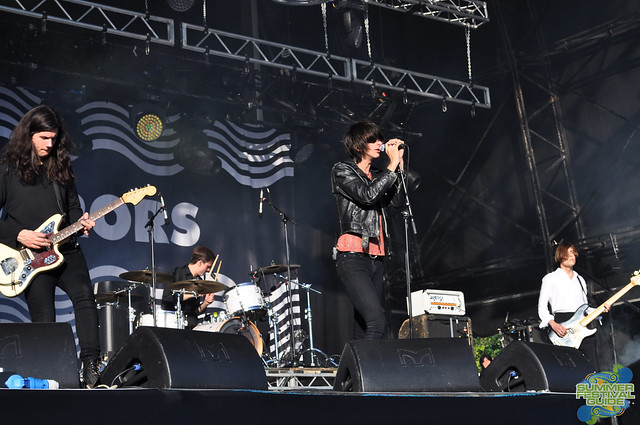 The atmosphere throughout the weekend was a sweet light-hearted daze of sweat and sunshine. There were all the staples of an amazing time, all gathered together in a safe but lax environment. Situated in an access with such easy access from the centre of London, in the middle of the beautiful Victoria Gardens. Having a platform for presenting emerging UK bands as well as such significant international bands like The Pixies, and dishing it out in such a beautiful part of london is amazing. I look forward to the line up for next year.