It might still be a baby on the festival circuit, but Bristol’s Love Save The Day has no trouble drawing the hordes. Students, ravers, and the trendy youth of the West Country are all out to play for the festival’s third birthday.

Thick, grey clouds loom on Saturday, with a washout predicted for the day’s entirety, but spirits are high, and these wellie-clad punters ain’t afraid of no mud. Located in the heart of Bristol’s centre, attractive little Castle Park seems an odd choice of location to hold a dance festival, but a convenient one nonetheless. 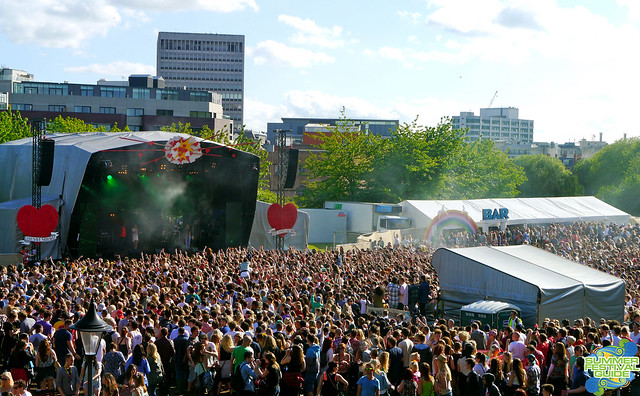 With a generous helping of DJs on the line up, we are launched headfirst into the housey beats that usually form the late night proceedings. The likes of Crazy P and Kove get the party started on the Futureboogie and BB Records stages, while the main stage presents a more eclectic mix of genres.

Kiesza proves a highlight, largely due to her impressive ability to carry out intricate dance routines while simultaneously projecting note perfect vocals. The crowd seems entertained when she beckons a chorus of “oohs” and “ahhs” during her most famous track, ‘Hideaway’; it’s an impressive turn out for the soon-to-be star.

Trudging through the already muddy grounds, we find a collection of smaller venues sheltered within the trees, including a ‘Cocktails and Dreams’ stage complete with a campervan selling exotic cocktails, and the ‘Dance Off’, an area for the hardcore ravers where a boxing ring has been erected in front the stage – presumably intended for busting moves rather than for competitive fighting.

Later, Hercules and Love Affair provide a rather disappointing set on the main stage, and despite their garish outfits, seem to struggle to really engage with their audience. Annie Mac picks things up again, offering nearly an hour and a half of healthy dance beats as the heavens really open. 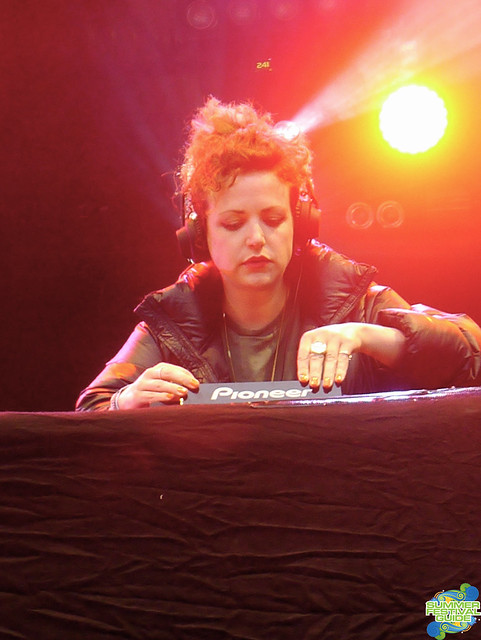 Saturday’s final headliner, Eats Everything, is local to Bristol, and his house tracks are successful in carrying the party into the night, gearing up the hardcore ravers for the after party taking place off-site at a nearby nightclub.

A much brighter and sunnier start to Sunday sets spirits high. Kicking things off are Laid Blak, recognised for their reggae infused music and weed-themed lyrics. Joined on stage by their children and revelling in the midday sun, the group seem to be having so much fun that they appear reluctant to leave at the end of their set!

Subsequent act Gentleman’s Dub Club are equally as excitable, and prove to be one of the standout performances of the festival. A parade of suited and booted men make up this ten-man band, complete with trumpeter and saxophonist. Exuding energy, they prance, skank and bounce their way through the set, urging the audience to join them in doing so. As the clouds part, they entice the crowd into a sun dance, which subsequently works its magic for the rest of the festival.

As the day progresses, bar queues begin to snake around the festival, as the crowds line up to wash down the afternoon with a customary Bristolian cider or Pimms for such weather. The lack of bars and food stalls is one of the biggest problems at this festival, which no doubt would benefit financially by making refreshments more readily available.

Quantic and Clean Bandit are both hits over on the main stage, with the former injecting a refreshing dose of salsa and jazz into the mix, and the latter pleasing the audience with their rendition of ‘Rather Be’. Yet perhaps the biggest crowds are drawn at the opposite end of the festival, when Shy FX and then Mike Skinner take to the Soundboy stage. Skinner swops vocals for decks, and surprisingly proves to be quite the DJ.

Bringing proceedings to a close, Jamie XX spins and remixes furiously to produce his trademark electronica sound, warming up the stage for headliner SBTRKT. Joined by regular collaborator Sampha, the set is slick and entrancing, enhanced by a hypnotic light show reserved for only the biggest artists.

Aside from the food and drink niggle, Love Saves the Day is a triumph. Despite covering such a small area of ground, the sound from its six stages never muddles, and it is particularly refreshing to see artists given such long sets. Bring on year four!