Festival fever was back in business with the popular dance event We Are Fstvl playing hosts this late May bank holiday weekend. Reported weather weeks before the event claimed of a heat wave across the weekend but that couldn’t have been further from the truth with the early Saturday afternoon seeing Upminster Essex covered in heavy consistent rain that increased the Poncho sales dramatically.

However this didn’t dampen the spirits of the many thousands of ravers in attendance.  All eyes were directed to the VIP Village where Shadow Child was on the decks at the MK & Friends tent. The well-known dance shuffle was the crowd favourite dance move and was certainly helping combat the wet weather, oh to be in Ibiza! The VIP Village was a nice touch for the extra money paid for VIP treatment with hot tubs and other added bonuses to add to your weekend. 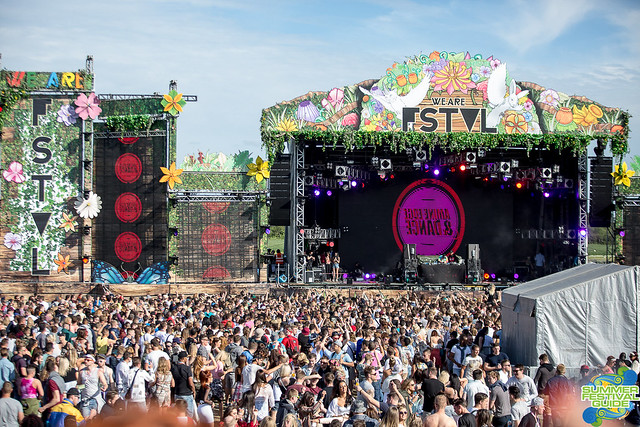 The sun finally decided to rear its head and the Saturday was setting up nicely. Stages such as the ‘We Are Fstvl Main Stage’, ‘Defected In The House’ and ‘Paradise’ boasted big names such as Jamie Jones, Disclosure, Infinity Ink, Guti, Hot Since 82 and Ritchie Hawtin who was headlining the main stage. For the fans of the more up tempo electric music, the We Are Elctrnc stage served all that you needed to get a bit more bouncy and intense.

Earlier sets from Syn Cole, Hard Rock Sofa and Kryder were just the start on what was a great line up on the We Are Elctrnc stage. Thomas Gold was also a highlight with a lively stand out set on the decks. Up next was Dirty Dutch DJ Chuckie who electrified everyone with his take on the dirty house scene, a genre that is wild and showcased We Are Fstvl as a great festival for different genres of dance music.

With each stage having its main headline act, you were spoilt for choice. A big focus again was on the electric stage where former Pendulum members Rob Swire and Gareth McGrillen threw in their current project Knife Party with such velocity it blew off the faces of the ever loving crowd. This was achieved through dramatic music played and also the quite frequent jets of fire that added even more of an edge to the amazing visuals on the electric stage. Always an exciting experience seeing  Knife Party, who have announced there will be a new Knife Party album coming soon as well as a new Pendulum album, the first one in almost five years. Roll on day two.

With the first day being a success, you could sense the anticipation of another day of great music and good times. The weather being beautiful from the start insured big smiles, more sun cream and the disregard of the wet weather gear! Getting in nice an early this time avoided the heavy queues that would increase later in the day and allowed the early risers to head over to the ‘Cocoon’ stage where Julien Bracht was playing some nice live vibes, something that may have been needed for those with a sore head from the previous day!

A wander round the festival site saw two tents that couldn’t have been more separate in taste of dance music, but were equally as great as each other. One of them being the ‘Andy C Presents Ram’ tent saw the BPM tempo rise above the 160 mark which also could be said the same for your heart rate. A very energetic tent that emphasised the MC role to give the building crowd a bit of interaction. Switch over to the ‘Toolroom Knights Ibiza’ tent which explains itself in the name. Shut your eyes and you were in Ibiza in what was a much needed Balearic sounding change up. Names on the line up were Weiss, Tensnake and Mark Knight. 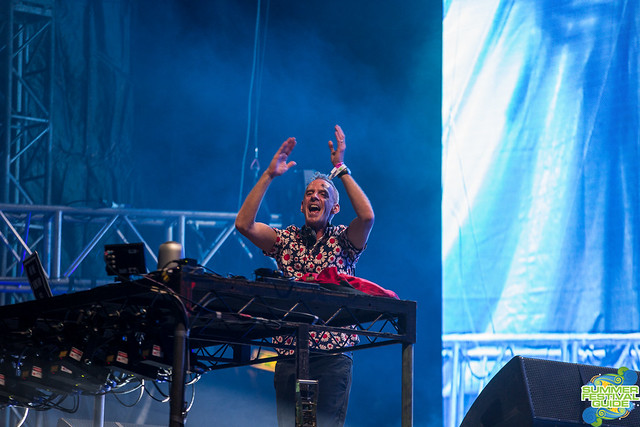 With the Sunday in full swing, the focus switched to the best stage of the day. The suitably named ‘Eat Sleep Rave Repeat’ main stage boasted a massive line up with the likes of Riva Starr, Tiga, Solumun and a second appearance of the weekend from Amine Edge & Dance. By 7pm the main stage was packed with dancing humans and the spinning duties were handed over to Duke Dumont who provided a fantastic set. Finally as the sun started to set over Upminster Essex, the biggest names of the weekend were set the task of continuing the party atmosphere. Annie Mac fresh from Radio 1’s Big Weekender was first up before the legend Fat Boy Slim! Playing hits such as 'Praise You' and the main stage namesake 'Eat Sleep Rave Repeat' it provided an electrifying finale to a great weekend and a great festival.