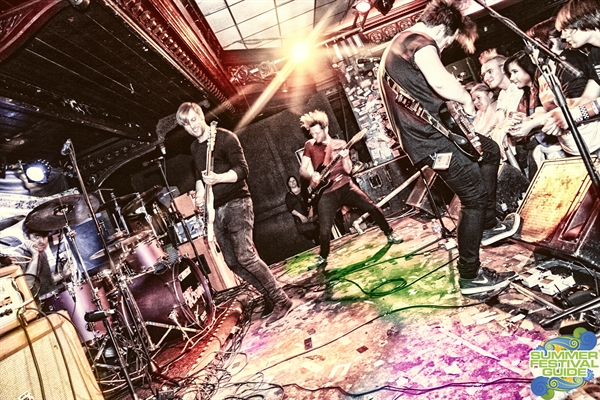 It was impossible not to notice the depth of people standing around outside the two quite frankly enormous tour buses parked in the venue of Bedford Esquires, as I arrived to interview and review the quartet band LACEY, who are with America's Patent Pending, and People on Vacations spring break tour.

The atmosphere was exceptionally charged for a Sunday night event, and the small but fabulous venues floor soon started reverberating with the sounds of some truly talented guitar playing.

Lacey's lead vocalist Grazz makes the crowd welcome with easy banter, and the set opens to a cracking start with Won’t be the last time, and Hometown, which is featured on their current EP Outlaws.

Effortlessly charming and clearly exceptionally talented, the band make full use of the small stage, with crystal clear lyrics and exquisite timing, clearly comfortable that under the lights and in front of the crowd is where they belong

A fan hitches up her skirt to show me the tattoo of the 4 fresh faced Nottingham Lacey boys, forever etched onto her skin and I can’t help but feel like their loyal and ever growing fan base are equally aware that they are witnessing the beginnings of something that potentially is about to become very big indeed.

Lacey don’t fit comfortably into one genre, the music is clearly very important and although alternative or pop/ rock would probably be the safest description, they demand a wider audience than the description allows. A few songs in and I found myself slightly in awe wondering how long it will be until I hear the news that they are headlining somewhere phenomenal.

Throughout the set the boys take the opportunity to thank Patent Pending and People on Vacation for having them of the UK tour. It’s clearly a beautiful combination of talent and when Joe Ragosta, the lead vocalist for Patent Pending, joins them on stage its clear to see the bond between them all.

From above the stage I watch the band close their short set with the single Reach Out from their upcoming Album. I’m balancing precariously trying to take a photograph from above, but my body doesn’t want to stay still to the music. The beats are enchanting and the vocals come easily, they really don’t have to try too hard to be good, its obvious that its a natural position for them. With a final farewell the crowd shows huge appreciation for the band, one fan so keen to acknowledge their obvious sex appeal that she throws her bra onto the stage. The bands influences may well be the Long Island music scene but they stand tall in a class of their own, and if I was able to I would take the next few days off and bask in the energy of their tour whilst listening to the sound of magic in the making.

The Ep Outlaws is on sale now. Lacey official Uk is the best place to be able to listen to Lacey and you can listen to a free download of Laceys single from the album via this link  : https://soundcloud.com/laceyofficialuk/reach-out/s-esoz8

Prior to the show I had the opportunity to put some questions to the boys about their band, the tour and future plans.

Where did the band name Lacey originate from?

(Grazz) We all grew up listening to a band called Brand New from Long Island whose lead vocalist is called Jesse Lacey so we guess it was a nod of acknowledgement in that direction.

Whats the bands history/ Where did you all meet?

(Grazz Pete and Josh )We all moved the Nottingham together for University and have placed together as Lacey for 3 years. Three of us went to the same school and other band names include Nevertheless and Erica Black.

Has anything happened on the tour that really stands out?

(Grazz and Josh ) During the Manchester gig Josh nearly killed Joe Ragosta from Patent Pending. When Joe came on to sing the bring to one of our tracks Josh spun around with his guitar and accidentally impailed him with his guitar.

What have you been listening to in your cars recently?

(Josh) We have had the new You Me at Six Album; Cavalier Youth album playing a lot, also Manchester based The1975. (Pete) We have also been listening to Mallory Knox and still listen to bands such as Taking Back Sunday.

Did you learn your instruments as kids?

(Pete, laughing) Myself and Grazz grew up together as kids and we actually decided that we wanted to be in a band before we could play anything. So we decided that one of us would buy as guitar and the other one would buy a bass and we used to write songs and play whilst we were still learning.

Do you write all your own music and lyrics?

(Pete) Yeah always, from day one. Josh will come with a guitar riff and we will all just play around with it.

(Josh) We have a structure that just works, Grazz writes all the lyrics and we kind of work backwards in the sense that that’s the last thing we do. It just kind of builds layer by layer. We have always been really adamant that the music is really melodic and not just a repeat of the same few chords.

The artwork on your EP is quite unusual where did it come from?

(Dave ) The EP is called outlaw because of Nottinghams connections with robin hood. There is a very old Latin Law that defines an outlaw as someone one who wears a wolfs head, hence thats where the wolf came from for the artwork.

Whats the plan for the next 12 months?

(Grazz / Pete) Albums next, we are beck into the studio in early June to finish working on the album, the teaser which is called Reach out is a teaser from the Album which was available as a download from the 21st April. Its probably a good indication of what the album is going to be like, bigger and more atmospheric. We hope to play further tours at the back end of the year to do our own shows and gig as much as possible.