Having sold out of the 5000 tickets that were on sale for this years Standon Calling, we were pretty excited about seeing what this small little festival based in Hertfordshire had to offer.

It was the first time since its inception that Standon Calling has sold out, and it had good reason to!  The lineup was no short of spectacular with Bastille, Digitialism, De La Soul, Band of Skulls, DJ Yoda and more performing across the stages over the weekend.
On top of that, this years theme was “Running from the Circus” and there was a number of circus based activities taking place through the different arenas.  The wonderful trapeze school provided a number of “ohhhs”, “ahhhs”, “woohooos” and other reactions from the crowd as the punters took their hand at all sorts of acrobatics on the learning Trapeze structure.
Walking around the grounds we could see that a number of people made the effort to dress up in their favourite circus acts.  There were plenty of face painted kids running around, lots of shiny and tight lycra pants and a other circus costumes.
Being quite a small festival, it was no effort walking around to check everything out.  There was plenty of food and drink selection for everyone.  This year Standon Calling implemented a cash less transaction scheme whereby each festival goer was given a wristband on entry which was then topped up via Cash and used to purchase food and drinks.  Personally I thought this was a good system, it saved having to go through wallets for money and it seemed to make the process of buying things quite streamlined.  At the end of your weekend a cash refund was given for any remaining money.
There is a huge family friendly tag associated to Standon Calling and the kids had plenty to keep them entertained.  A swimming pool, arts and crafts and children dedicated area’s like “The Little Den” made sure that there was something for everyone!
Musically, there is plenty to see.  De La Soul closed out the main stage for this year with a smashing performance.  Having being slightly delayed due to some sounds issues, Kelvin, David and Vincent aka De La Soul came out full of energy to a huge crowd which had descended to the main area to catch the hip hop legends.  Getting the crowd involved by asking the audience “Who wants to hear some hip hop” and ripping straight into their massive back catalogue of tunes such as “Take it off“, “Oooh“, “Me Myself and I“, “Stakes is High” and more, they had the crowd waving their hands in the air and bouncing about during the entirety of their set.
One of the most memorable parts of De La Soul’s set was when they requested that everyone (and I mean everyone) put one hand up in the air.  They even had all the photographers and security waving hands up and down whilst they videoed the reaction from their phones on the stage.  Having seen them years ago, De La Soul were a pleasure to watch again bringing to a close what was quite a spectacular year for Standon Calling. 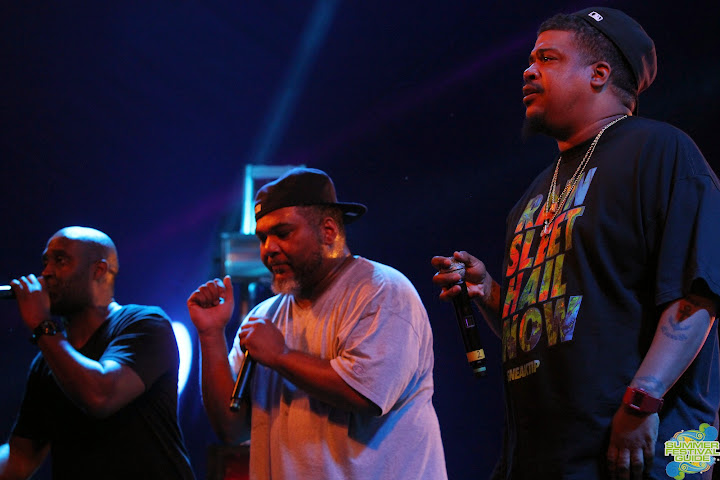 Earlier on in the day, we checked out London Grammar whom I had never seen live before and was really impressed.  Hannah Reid has amazing vocals and managed to pack out the Big Top with the crowds running in to catch this new band perform hits from their debut EP ‘Metal & Dust‘.  London Grammar were ecstatic to see just how many people were in the tent, even mentioning very young kids which were up on the shoulders of parents watching.
Alunageorge also took to the Big Top stage to show why they are in so much demand this year after their massive hit ‘Attracting Flies’ smashed the charts around the world.  Having been nominated for the Brit Awards, this musical duo had the crowd shuffling  their feet to their electronic infused sound.
Gentlemen’s Dub Club, Chloe Howl, London Afrobeat Collective and Rotten Hill Gang also performed on Sunday to a crowd which had witnessed a number of great performances over the weekend.
As small festivals in the UK go, Standon Calling has to be one of the best festivals we have ever been to.  Everything from the music, to the facilities, and the organisation of the event was spot on.  It has a little something for everyone and still has that independent festival vibe running through it that just makes it something more special.
Check out more photos from Standon Calling 2013 here
FacebookTweet