The distinctive theme for the Secret Garden Party was surrounded by the idea of losing and finding yourself. Situated in the rural Abbots Ripton, near Huntingdon, people unite as “gardeners” coming together like free atoms colliding along the way. You leave yourself at the boundaries of reality and enter into an innovative multi-dimensional universe. With contagious vibes radiating from the drones of twentieth century hippies that trudged barefoot towards the gates (seeming to be unphased by the crates of Bulmers and four man tents they carried with them) there was a real sense of something exciting in the air. And we were not to be disappointed.

With the distant mumble of a soft rock solo guiding our way, we stumbled across Z Star at the Where The Wild Things Are stage. The crowd themselves however where not quite as wild as the stages name suggested but what became apparent was that the real hustle and bustle was happening just out of focus.

Men and women alike draped in eccentric fancy dress and showered in glitter led the way, drawing us away from the main attractions to the real heart of this unique festival. Sugar skull armies roamed the fields through vintage door frames that stood precariously, despite having no purpose at all. That’s when it really became apparent, secret garden party wasn’t your average festival. This is something that even virgin gardeners became accustomed to be at one with. One pixie like festival goer described the experience as being “an outer body experience” before being gently swept away into the twilight. 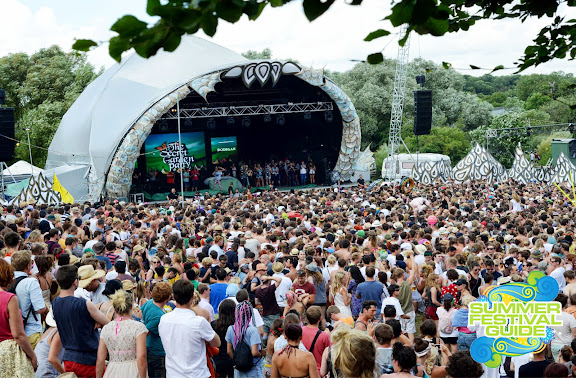 We followed suit and were abruptly woken by the dawn and the dew sweeping into our shoddy single layered tent that meant we were frankly sleeping under the stars. A bacon butty soon fixed all of our problems as we strolled through the sleeping souls of the intoxicated gardeners. A surreal air of stillness captivated the acres of land that had previously been flooded with energy but where now defused. We crossed paths with a Mad Scientist who repeatedly called out to no one in particular, “There’s a pile of experiences somewhere and no one can find them. What happened! What happened?”

The morning soon burst back into light as it didn’t take long before the gardeners were refreshed and eager to experience what the bands on their wrists could allow them. Flooding back to the fields meant that the atmosphere was much more electric. Exercise classes being led by mythical creatures in The Forum riled up the children, teens and adults of all ages that were catching the worms. These small, almost insignificant occurrences are almost magnetic in this environment. Gardeners gathered to admire with curiosity as to what was unravelling before them.

The music may be what you think you’re paying for, but the real experiences come in the surreal. Your own handmade postcards would be delivered to anyone who you could describe. So, your mate in the floral tent, with brown hair, wearing a top hat and fox tail would surely receive her mail. Being handed grasshoppers by workers displayed how this festival is all about being at one with nature and to become a true gardener you have to really run free. The more you open up and allow yourself to roam carelessly, the more of this weird and wonderful universe you will unintentionally discover.

The Labyrinth acted as a winding corridor with unravelling pathways which lead to unique burrows with different purposes. Burrows that acted as living rooms occupied with large restful sofas and dated coffee tables. On your way through, an assortment of books hung from the trees. One titled ‘Reveal your biggest secret’, the pages overflowed with confessions. Mirrors lay and wished to be broken, but no glass was seen scattered amongst the floor. No one gambled to risk the superstition. A fellow explorer explained to me, “the music is the backing track to a whole new realm,” as the hazy music journeyed from deeper within the forest. You wander around like Alice in Wonderland and unearth bands such as The Wytches, Django Django and Dan Crol. This was a mere treat amongst the array of activities such as crafts, sewing and epic mud combat wars. 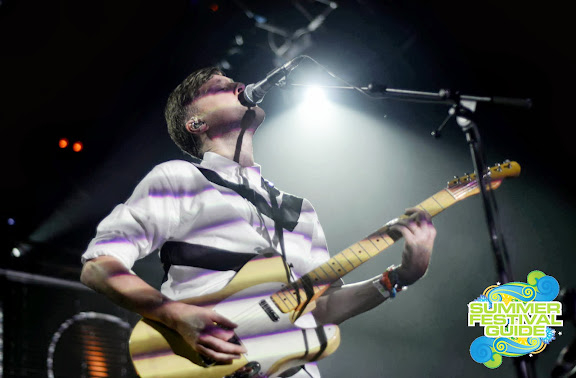 A remarkable moment of Secret Garden Party gathered thousands of gardeners together; the paint fight. Waves of figures swarmed around the main stage and back into the far distance. The iconic sounds of House of Pain’s ‘Jump Around’ boomed and the sea of bodies jumped and hurled paint into the air, causing vast clouds of multicolour.

It was a spiritual experience and one band in particular stood out at this festival in a similar way. The Staves’ effortless ethereal aura personified Secret Garden Party, appealing to all ages that basked in the summer sun to soak in this other worldly experience. The Staves called out to the crowd “you all look very sunny” as girls danced about like small pixies, supernaturally moving with fascination to the enchanting guitar strings and the echoing melodies of the three sisters.

The Staves ethereal legacy lived on in the days to come, with bands such as Misty Miller serenading the crowds that persevered through the rain. The weather seemed to act as a pivotal point but the crowds persevered through the down pour. It did not dampen the spirits of most of the gardeners, if anything it brought new life to the festival. One wet gardener stated “the vibe- everyone is over it, or way to into it.”

Something else that people were defiantly ‘into’ was the food. Secret Garden Party prides itself on being diverse, and its catering services did the same. Offering up Ostrich burger for the adventurous, or a tamer pepperoni pizza for those with less experimental taste buds, there was something for everyone.

Secret Garden Party acts as an escape to the reality which we all face on a daily basis. People come here for the experiences beyond the music; to lose themselves and act as free spirits among the beautiful surroundings. The green backdrop becomes a present day Neverland, acting as a metaphor for eternal childhood, immortality and escapism for the gardeners. Time is difficult to track in this world. But when time eventually regains itself come Monday morning and we’ve packed up our dew covered tents; we knew we were leaving behind something monumental. As the masses left towards the gates, one content garden smiled and said “until next year, yeah?”