FacebookTweet
This year’s Wireless Festival had announced a lineup so spectacular that expectations were riding high when Jay Z and Justin Timberlake were set to close out all 3 days of Wireless, Justin on Friday, Jay Z on Saturday and the both of them performing their “The Legends of Summer” tour on Sunday.
Brooklyn born hip hop megastar Jay Z attracted a sold out 60,000 people to the main stage arena to close out Saturday night and he did not disappoint.  Looking slick in a plain white shirt and customary gold chain, he kicks off with ‘Public Service Announcement‘.  With the crowd in unison chanting HOV, this is just the beginning of his 70 minute set.  Announcing that his new album Magna Carta has gone number one in the UK, he dives straight into ‘Tom Ford’, one of the latest singles from his new album.  With one million giveaways of his album to Samsung customers, you can tell enough of the crowd have had a good listen to Magna Carta as they all sing along with him.
We immerse ourselves in the crowd to listen to ‘Empire State of Mind’, another new track ‘Picasso Baby’, and ‘Run this town’.  Jay Z‘s smooth lyrical delivery and ability to control the crowd reminds us why he is still one of the hottest rappers in the world.  Jay Z’s set is flawless and as the night comes to a close we are treated with an appearance by Jay’s Wireless headliner partner Justin Timberlake to perform the opening track on Magna Carta ‘Holy Grail‘.  The crowd goes absolutely mental as Justin’s silky voice hits the right notes on the first chorus to ‘Holy Grail‘. 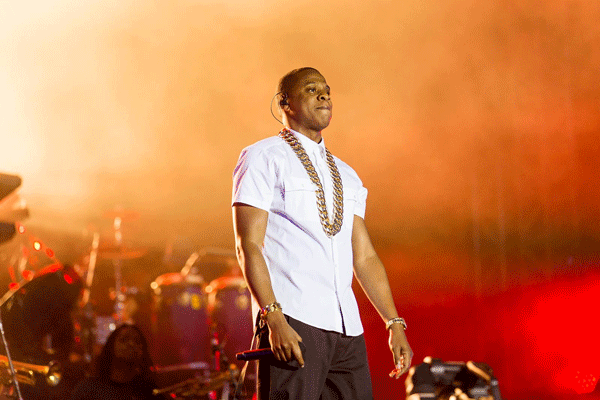 Photo courtesy of Wireless Festival
Earlier in the day, there was a special guest set to perform in the Pepsi Max Arena and we got there just in time to see that it was UK rapper Tinie Tempah.  By this stage the tent was so packed that we made use of the outside screens to get a glimpse of the man that was a huge drawcard for the festival two years ago.  ‘Drinking from the Bottle‘ and ‘Pass Out‘ blast through the sound system as the crowd bounce up and down inside and around the tent.
Scottish songstress Emile Sande impressed with notable songs “Heaven” and “When I sleep” being my highlights of the set.  With the crowd singing alongside her as the sun begins to set over London, Emile is the perfect act to warm the crowd up before hiphop superstar and headliner Jay Z.
I have been a huge fan of Compton rapper Kendrick Lamar and was pleasantly surprised to see just how popular he was as a massive crowd packed into the main arena to see the West Coast lad bust out his hits from his album including album titled ‘M.A.D.D City‘, ‘Fu*kin Problems‘, ‘Money Trees’, ‘B*tch dont kill my vibe‘ and ‘Swimming Pools‘.  His chilled style and his seamless delivery of his tunes make him quite a different rapper to watch live than many others I have seen before.  If you haven’t yet heard his album or seen him live then I highly recommend it!
Rita Ora was on hand to make sure the crowd was ‘Hot Right Now‘ as the sun basked down in London on what would be one of the hottest days of the year.  Her rendition of The Neptunes ‘She wants to move‘ and Notorious Big’s ‘Big Poppa‘ & ‘Juicy‘ was a surprise but the crowd lapped it up and mashed to her music.
Wu Tang influenced Macklemore & Ryan Lewis performed earlier in the day bringing their fast paced rapping and high energy performance to the Wireless crowd.  Number one hit’s ‘Thrift Shop‘ & ‘Can’t Hold Us‘ had the entire arena singing as the crowd thoroughly enjoyed the newcomers set.
Even though Wireless Festival had moved from the more central location of Hyde Park to Queen Elizabeth Olympic Park, there was no denying that this years festival was up there with one of the best Wireless Festival’s yet.  With no rain in sight and the sun beaming down over the entire weekend, the iconic Olympic Park site proved to be the perfect setting for a weekend of amazing music and festival entertainment.
FacebookTweet