In readiness Beat Herder festival this year we went out and stocked up on new supplies of wellies and waterproofs after being towed off site in calf deep mud by a JCB last year. We couldn’t have got it more wrong as this year the festival fell on the most glorious weekend of the year so far, with scorching temperatures in the late 20’s.  In stark contrast, it was hard going due to heat exhaustion, rather than trudging in mud-laden boots.

Sprawling over the lovely valleys of Lancashire, this three-day festival attracts a wonderful community of people who all crave a fun-packed weekend. There’s an array of different stages here offering plenty of choice for musical tastes from house, techno, reggae, drum & bass, funk, disco and soul. New additions for 2013 was a 60 feet long, corrugated steel, fire breathing dance arena named The Fortress.  Over the weekend the DJ booth in the loft played host to Cut la Roc, John Carter, Justin Roberston, Bentley Rhythm Ace and Sicknote. The other notable new space was Maison D’etre that hosted eclectic music and comedy acts throughout the weekend.

Now in its eighth year, the BH organsiers seem to have hit on a winning formula for the perfect festival experience; reasonably priced bars, the ability to attract reputable artists and international dj’s and a not for profit ethic.  It’s clear that loads of love and attention that go into the site from the hand painted flower boxes with artists’ names on, to the beautiful hand-sewn timetables.

The site itself has everything in the right proportion, small enough to bump the same friendly faces around the site other and stages within easy distance of each other.  My favourite space has to be the beautifully lit up Toil Trees stage in the woodland area, where the trees seem to reach up to into the heavens. Apart from a awesome line up of dj’s from Kissy Sellout, Mr Scruff and Norman Jay, It even has its own mini town, complete with a chapel of rest (open purely for your dancing pleasure), a vintage sweet shop, a hotel, garage, a barbers shop (yes they really cut hair on site) and a tattooist (…and yes you can get yourself a real beat herder logo tat to boot).

Friday night’s standout performance was from Chic and Nile Rogers.  They kicked the festival off in pure style covering their hits ‘I’m Coming Out, Everybody Dance, He’s the Greatest Dancer, We are Family’ and stage invasion finale ‘Le Freak’. I felt like I was witnessing a very special moment. Groove Armada followed Booka Shade’s thumping live set. Tom and Andy brought the stage to a close with a dj set of clubland classics and mixes of their own superstylin’ tunes. 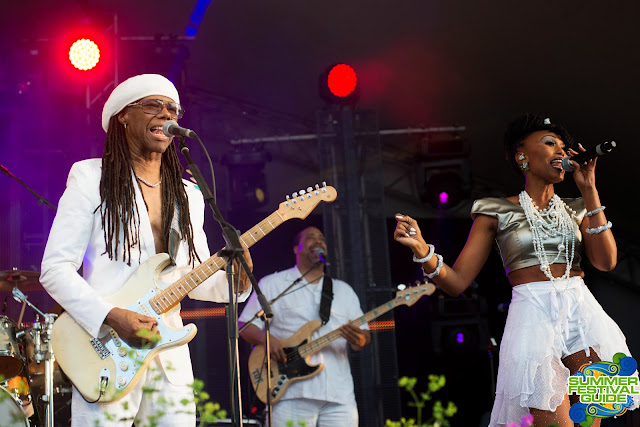 This year’s fancy dress theme is T, and dressing up here is huge. People really go to town on hand made costumes rather than cheesy bought in attire.  We witnessed twisters, terracotta armies, technic stereos, togas, tornados, taco’s, tin men, tweedle dee and dums, a twix, Thatcher, trailer trash, take away, teen wolves, tampons and one punter whom aptly came as a tent.

The Other Tribe helped us ease back into the party vibe early Saturday evening with their infectious summer anthem ‘Skirts’. Another main stage highlight was Slamboree. A 10 piece band made up of circus performers who manage to create what can only be described as an visual and audio riot, with music spanning dub, Balkan, rave and hip hop. We danced the rest of Saturday night away in the pews of the chapel, arms raised to the air and sipping on cocktails with the sassy waitresses in the Hotel California.  You have to shake everything that your mama gave you in in here, no standing still, it’s the law!

Sunday was super el scorchio down on beat-herdershire farm, hitting the low 30’s. Hiding in shaded areas and iced smoothies was the only way to keep cool.  Perfect Sunday afternoon tunes were underway from Good Times DJ, Norman Jay.  We melted in the Maison watching comedienne Barbara Nices’ hilarious set.  She encouraged overheated, lethargic punters to get involved in a game of dead celebrity statues. Raising temperatures nicely in the Toil Trees was a 4 hour set from Mr Scruff and MC Kwasi, perfect in the hazy wooded sunshine.

Bondax delivered a blistering Sunday night ‘dance ya socks off’ set that bought the festival to a beautiful close. Ahhh…well that’s Beat Herder over for another year, we’ll definitely see you in the shire next year for more beats and barminess. Herd em up!

Photos by Jane Anderson are here