If you weren't previously assured of Iron Maiden's God status in the world of metal, there's absolutely no denying it now. Saturday night at Download, we're standing in a soggy field, shoulder to shoulder, shivering in anticipation… as a Spitfire – yes, a SPITFIRE, soars up from behind the main stage. As the metal horns are thrust up to the sky, the aircraft banks and continues the flyby over a stunned crowd, and the band burst on stage for 'Moonchild'. Now THAT's an entrance.

Their ice-berg styled gangways make for Bruce's personal runway as he races about during 'Can I Play With Madness', wearing a sparkly clockwork-covered tailcoat. It's definitely a step up from the swamp-thing outfit we witnessed last time. Despite a bit of wavering sound, 'The Prisoner' (complete with a clip from the 1967 tv series) warmed up for the arena-shaking '2 Minutes To Midnight', with extreme crowd participation.

The driving wind in the first half of the set was  fairly irritating, and probably worse behind the sound tent, definitely nowhere near as unfortunate as befallen by Metallica in 2012 – but did pick up for 'Afraid To Shoot Strangers' and 'The Trooper' with Bruce donning his traditional red 'Light Brigade' uniform and giant Union Flag. Bruce jokes "Welcome to Monsters of Rock '88" to which the five guys standing next to us yell "We were there!!" and certainly, Maiden are a band that people come back time and time again for. Giggling "…back then we couldn't blow things up, or use fire… Or a Battle of Britain Memorial Spitfire…" Bruce thanks RAF Coningsby for the loan, and takes a swig of signature Trooper Beer.

'The Number of The Beast' (with giant fire canons and a flame-eyed Beast) and 'Run To The Hills' (including frontier Eddie wielding a sword at band-members) are screamed at deafening levels by the crowd around us… Ok ok, it was us too… and a giant grimacing Eddie looming over the stage is revealed for 'Seventh Son of a Seventh Son'.

After a huge instrumental and some well-timed fireworks, the iconic refrain of 'Fear of the Dark' is played out to a chorus of 'woooaaahhh-ing' fans. Yes it's traditional, Yes we've seen it before. Does it mean that hearing ninety thousand people locked in song with a single string of notes is any less impressive? No. Nothing makes your breath catch like looking back at the sea of lighters waving in the dark, it's the stuff ambitions are forged from, and as Bruce drops "a little anxious, in Donington Park" the young lad in front of us turns to his mum and says "This is the best thing I've ever heard" it brings me right back to the time I first saw Maiden.

An enormous Eddie holding a writhing heart-type-beast for 'Iron Maiden' has his head lit on fire before the band depart for a short break for the encore, where we finally get to hear 'Aces High', 'The Evil That Men Do' and 'Running Free', though Bruce was less 'running-free' than 'skipping-like-a-spring-lamb-free'…

The band thank everyone for a great night, and having tantalised us with the announcement of an O2 show later in the year, it's clear they're leaving everyone on a high. As the glassy eyes of people who've just witnessed something special, turn toward the exits, we are happily singing along with 'Always Look on the Bright Side of Life', as only British festival-goers – who've spent two days being sunburnt and rained on, can truly appreciate. Iron Maiden were everything they should be and more, gaining a whole new generation of fans in one night. 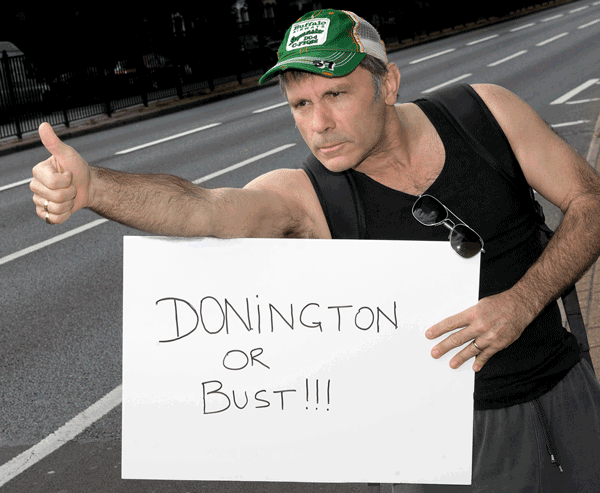