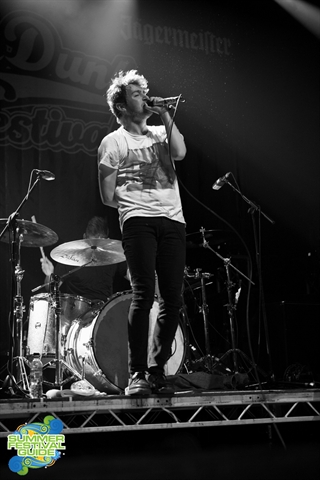 With so many festivals spread over whole weekends, Slamdunk offers something a little different. With seven stages, both indoor and out, and bands playing throughout the day, Slamdunk Wolverhampton offers the younger generation a chance to experience the excitement of a punk rock festival without the hassle of camping.

The crowd immediately gravitated towards the Monster Energy stage at the far end of the arena, a­s it boasted the first act of the day, Heart in Hand. The British hardcore act kicked off the festival with a bang, exhibiting the spirit that set the precedence for all the bands that followed them.

After exploring outside through all the assorted merchandise tents, the flow of the crowd swept me inside in time to see what the main stage had to offer. With bands such as Tonight Alive and Sleeping with Sirens on throughout the day, there was constantly a lively crowd leading up to the big headliners, the fantastic All Time Low. I don’t think I’ve ever heard screams like those leading up to the entrance of the US four piece. As the lights went out after the final sound checks, the screams were beyond deafening and many of those ladies had their bras at the ready to throw. And throw them they did! Lead guitarist, Jack Barakat, had quite the extensive collection hanging from his mic stand by the time the first song peaked. And with their bright, energetic performance, they didn’t disappoint, with crowds spilling into the hallways straining to get a glimpse of the famous foursome.

If you preferred a closer encounter with your favourite bands and were willing to explore the more hidden stages, you were rewarded with two more stages, each offering their own unique take of the festival experience. The Tiger stage alone offered a more intimate setting, giving bands like Yashin and Cancer Bats, a chance of a far more personal performance. In fact Harry Redford, one of the two lead singers of Yashin, couldn’t keep himself away from the crowd.

It wasn’t exclusively for the younger generation of punk rockers though. Heading back outside to the Vans stage, there was an impressive  line-up of 90s punk bands to greet the more old school punk in the crowd. Throughout the day there was a gathering of brightly coloured mohawks to be seen, and as soon as the bands announced their arrival the ‘hawks made their way forward, like shark fins heading towards their next victim.

With the likes of [Spunge] proclaiming “We are not dead!” and MC Lars stating out loud to the crowd that skanking is still cool, with his post-punk laptop rap inviting members of the crowd onto the stage to get down and dance.  There were even brass instruments, some more steampunk than others, making an appearance with the likes of Streetlight Manifesto and the recently reformed King Prawn.

All in all, beers, bands, bras and some bloody scary 10ft aliens walking around. This bank holiday Monday, Slamdunk Wolverhampton was the place to be!