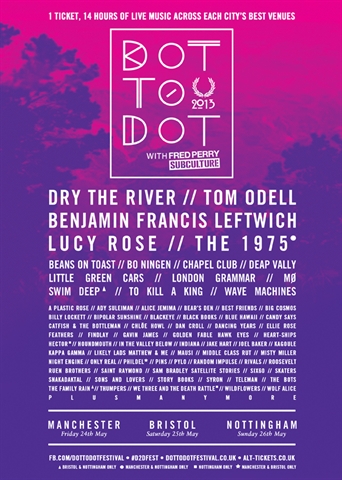 Like Camden Crawl, Live at Leeds and Brighton's Great Escape. Dot to Dot is a city centre based festival.  Since forming in 2005 initially in Nottingham, Dot to Dot festival has expanded to three cities and now runs on three sucessive days over the Whit bank holiday weekend. Dot to Dot kicks off in Manchester on Friday 24th May, travels to Bristol on the Saturday before closing at Nottingham on the Sunday 26th.

Manchester's day, is centred around 8 venues in the the Oxford Road area from Witworth Street to Grosvenor Street. Your wristband entitles you into any of the featured venues (capacity permitting) and ranges from the 1,500 capacity Ritz, The brilliantly wallpapered Deaf Institute which is a favourite for many bands and fans,  long established student favourite The Thirsty Scolar, new cool venue in town Gorilla,  and my personal favourite Sound control which is hosting 3 rooms of music from 3pm to 3am
At many of these city centre festivals, visiting every venue is an impossible task due to the long walk and distance between venues.  However, with the exception of the SSI (which is still very walkable), every featured venue at Manchester's leg of Dot to Dot is within about 5 minutes walk of each other, meaning it's quite possible, to check out and visit every venue if you so wish.
Unlike most of the muddy field based festivals which force you to pay for a program for the privelidge of finding out stage times, the full venue listings and timings for all three cities have been announced and can be found at: http://dottodotfestival.co.uk/times meaning you can plan your day and check out the band's playing in advance.
The impressive line up features several acts playing at all three cities including Hottly tipped acoustic singer songwriters Tom Odell and Lucy Rose. Benjamin Francis Leftwich and Dry the River also play all days. The Manchester leg features many local must see bands who are producing music a million miles away from the old Oasis and Madchester stereotypes, and include the ambienat trippy beats and haunting vocals of From The Kites of San Quentin, fun, post- rocky insturmentals from Tribal fighters with party poppers almost guaranteed. If you can last until 2am then Manchester's Mount Fabric will be your new favourite band with their acomplised, complex, math-rock with astonishingly good vocals.
The key to these city centre festivals is adhering to any plan too strictly and allowing yourself to stumble across some new bands who you have not encountered before, and hopefully leave with a new favourite band for the summer.
Tickets are still available at a good value £20 from Alt Tickets: http://www.alt-tickets.co.uk/alttickets/home_dot_to_dot_festival_2013.html
FacebookTweet