Liverpool Sound City is a determinedly different festival. The line-up reads like a roll call of this summer’s biggest acts, and though it runs awkwardly from Thursday to Saturday (it’s an industry conference, much like South by Southwest), there’s enough programmed outside of the working week to make decisions hard.

I’m sidled up by a buzzing espresso machine in Bold Street Coffee, as one half of the Collectors Club give their third performance of the day. On a Friday night in Liverpool, I’m aware this is a pocket of relative calm. “You say you don’t but you want to go out tonight.” Billed as indie-pop, it’s an acoustic set: two guitars, two mics, two men. Or boys, the median age of the room 21 at best.

Lead singer Joe Smithson says he’s pretending to be Justin Timberlake, by way of acknowledging a vague similarity between single ‘Wanna Be You’ and the pop royalty’s ‘What Goes Around… Comes Around’. A sense of humour seems to characterise the Middlesbrough band. “Don’t you want me, want me like I want you?” Understated songs about tears and longing suite the space, and music spills through an open door into the busy street. Outside, it’s as alluring as the smell of just-made coffee (or of garlic mayonnaise from various takeaway spots lining the road).

The café sings along to a pleasing cover of Fleetwood Mac’s ‘Everywhere’, and afterwards people clap, something I’ve noticed increasingly absent in live settings. We’ll cheer, yes, but people tend not to want to put down their drinks to applaud. The room erupts with good-time classic ‘Under Pressure’ at the end of the set. It’s a smooth transition with the kind of high production values that typify this festival.

Next up on Bold Street is Dan Croll, whose latest release ‘Compliment Your Soul’ aims to do just that. I hear Phoenix, but unlike Paul Simon, Burt Bacharach, and the Dirty Projectors, the French outfit are not among his known influences. The band play a few bars of ‘Wonderwall’ (Oasis, no other), as Croll quips “We’ve all had a bit to drink.”

Buttoned-up and bespectacled, the sometime Liverpudlian sings folkily from the heart – “Oh mother, it’s all thanks to you… I’m gonna miss you.” ‘Home’ gets me too. It’s plucking at heart strings, but Croll offsets any melancholy by instructing guests to take their shoes off at the door, “‘cause it’s impolite not to, you’ll be damaging my floor, ‘cause it’s my home.” This track smacks of Australian singer-songwriter Josh Pyke, but that’s mostly my homesickness talking.

Croll’s is a talent that makes you want to pick up an instrument and learn, goddammit! Fans shout for ‘Marion’ and he obliges. He’s interested to hear what other acts the audience has seen so far, and even gives the café’s breakfast menu his endorsement. It’s a mighty wholesome musician that references porridge mid-set. There’s a smile as he thanks the band – “Nobody introduces me, but that’s okay.”

A few streets over and pushing midnight, French natives Concrete Knives are working the Kazimier Gardens stage. Six-strong, they sound their full number with thick bass, edgy synth and ample reggae throwbacks. A cover of Ini Kamoze’s ‘Here Comes the Hotstepper’ rounds out their cool credentials, as do school yard echoes in tracks like ‘Brand New Start’ and ‘Greyhound Racing’.

Around the block, headliners Everything Everything can be heard long before they are seen. I spot the queue first of course, the warehouse that is Liverpool Academy of Arts already at capacity. Theirs is a complex sound borrowing from many genres, which goes someway to explaining a wide appeal. Dressed in trademark boiler suits, there’s something unignorably Coldplay about the group. It’s likely a comparison they hate, but it’s only praise.

Rapid-fire delivery from fontman Jonathan Higgs is also something of a signature, his voice not classically appealing but captivating all the same. “Yeah, so, um, wait a second!” The urgent pace of breakthrough single ‘Cough Cough’ is in sharp contrast with lilting piano on ‘The Peaks’, but each is entertaining.

My night ends with Temples fronting a packed-out second storey Leaf. It’s enjoyable enough, and a fan in the crowd tells me emphatically that their neo-psychedelic rock is melodramatic. “Melodramatic,” he yells over the reverb, “can you spell it?” Yes, I can, though I suspect he means theatrical. It’s hard to see the bands’ faces for hair.

As with any festival, the interest is as much in journeying between stages, friendships forged waiting for a toilet cubicle or at the bar, and the random exchange of hats, sunglasses and other sundry attire. The beauty of an in-city event might be that you can go somewhere else entirely during those inevitable programme gaps.

Saturday brings bright skies and an excuse for a courtyard barbeque at Heebie Jeebies pub. Aussie act Deep Sea Arcade look and sound rock and roll, right down to bassist Nick Weaver’s finger gloves. ‘Girls’ is an easy favourite, and the all-male act display a knack for taking things to double-time, then back again with ease. The set ends quickly, a teaser for debut album ‘Outlands’ (although ‘If The Devil Won’t Take You’ sounds distinctly better live).

Finnish elctro-folk lady Sansa follows, and I’m amazed by what she can do with her voice (and feet). Lyrics trade primarily in matters of the heart, most overtly in the track ‘Boys’ – it goes “boys, boys, boys, boys, boys.” Her real talent is in recording live guitar and vocal samples, singing with two mics at times, and mixing these on-stage. Her jazzy scatting is equally impressive.

Night brings the frantic garage of local boys Broken English, who look as slick as they sound. The audience knows every word, too. I so often worry for drummers – do they get the recognition they deserve? This drummer looks disarmingly young, but he’s skilled and owns the role. The Kazimier plays host to London-based Mind Enterprises, appearing here as a duo. These guys could play a much later set, their chest-thumping, bassy electronic chords reminiscent of an abstract, more melodic Totally Enormous Extinct Dinosaurs. 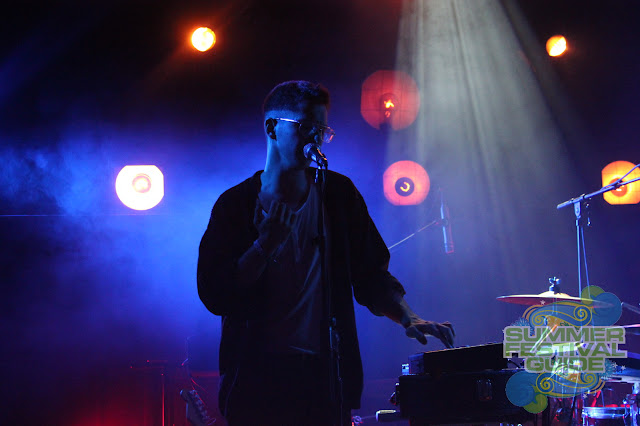 Popular indie act French Films are on form in requisite leather and denim jackets, so it’s a shock when singer Johannes Leppänen confesses he feels sick. “I actually threw-up on the way here.” How very rock and roll. Along with the festival’s second Justin Timberlake reference, Thomas J. Speight offers one of Sound City’s most memorable moments when he takes his set off-stage and into the audience for lovesong ‘Joni’. He offers to play a “quiet or a fast one” to close his spot, and two lads at the front shout “Both!” in perfect unison.

Toward the end of Liverpool Sound City Delphic’s set is fittingly showy, three minute singles drawn-out to six and seven minute long tracks. I stay long enough to hear ‘Red Lights’ and ‘This Momentary’, where jack-knifing beats build to the refrain “Let’s do something real.” Mount Kimbie are playing across the street, lauded as one of the festival’s best. It’s the first time I’ve heard them, and their eclectic electronica demands a second sitting (and a third, and fourth – you get the gist).

Transforming familiar urban spaces with those things about festivals we love best, Liverpool Sound City is an emphatic win. Leave your cares at home, and enjoy.