There’s a certain amount of fear inherent in trying something new. You’re excited, sure, and with a line-up like Kendal Calling’s you know you’ll have a good time. But have you been oversold? Have weeks of hype and anticipation set you up for one colossal fall, that sinking sense of ‘oh, that’s it?’ and the slow admission that things weren’t quite all you’d hoped?

These were the thoughts I silently entertained on the drive to Cumbria, but as we entered Lowther Deer Park and spied a herd of the creatures grazing peacefully in the next field, I was  assured of a magical weekend.

We were still fighting with tent poles (the vintage variety, circa 1985) as Newcastle outfit Maximo Park hit the main stage. The sound was surprisingly clear from our spot in the ‘party’ camping zone, and we paused for a brief impromptu dance session before resuming the battle against our half-pitched home.

The festival has a dream-like quality, owing much to its hideaway Lake District setting. Rumours circulate of a wedding on-site, and you get the feeling it’s the kind of festival folks take to heart. One mother of three said the family alternate years between here and Glastonbury, and Kendal does have that same quirky, wonderland (or is that woodland?) appeal, though on a scale less daunting (and easier on the wallet).

Billed as a ‘live music and contemporary circus extravaganza’, the spectacle that is Slamboree had the Chai Wallahs marquee flailing wildly. Bridging unlikely styles from classical to dubstep, I couldn’t count the performers – a juggler here, two exotic dancers there, oh and a few fire-twirlers if you weren’t impressed already. Punters weary from dancing up a storm took refuge to sway in their seats, and no one seemed to mind the stage getting smokey.

After a serious dose of the avant-garde, House Party just didn’t appeal. We made a beeline for bed armed with freshly steamed chai, curious as to what the dawn would bring. 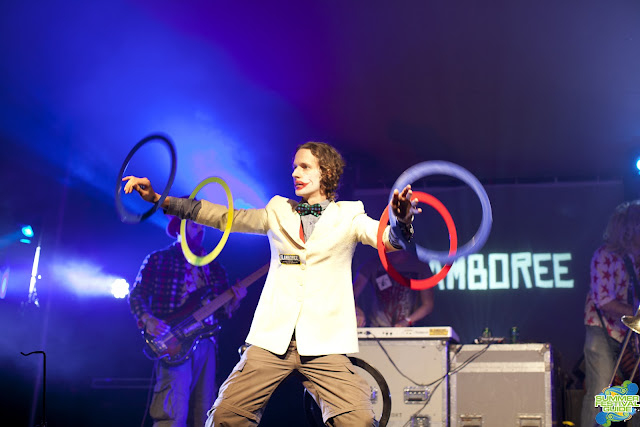 The Travelling Band open Saturday’s main stage, though I don’t mind saying that I’m too busy over at Ginger’s comfort  van to see their show. You’d be distracted too if your other half handed you a double scoop salt caramel and peanut butter ice cream cone, suffice to say it all sounded dreamy. Of the weekend’s playful roaming acts, something called the Sample-ist stand was my pick. Manned by two DJs in labcoats, and another three gents in white coveralls dancing up a storm beside them, the project involved capturing a voice sample from willing passers by (and there were plenty), then distorting it as part of a broadcast soundscape.

I couldn’t miss suited and booted London lot Spector, who got the audience clapping with ‘Friday Night’. From their dress you can tell they mean business, and boy can frontman Fred Macpherson scream! There’s romance in their synth-rock, with one track introduced as “for the lovers. Yeah, I see you in the trees over there.”

It’s A-grade entertainment when the band breaks mid-set: Macpherson has something unsavoury on his jacket, and needs to brush it off immediately as best he can. Later, and mid-song this time, he produces a comb to deftly fix already slicked-back hair. Spector close to an eager audience with hit single ‘Never Fade Away’. I hope they won’t.

Evening now, and a DJ set from Humanizer has the Glow Dance Tent thumping. Back at the Chai Wallahs stage, a special mention goes to Dizraeli and The Small Gods for their decidedly different hip hop folk. The instrumental ‘Istanbul Express’ transports the (admittedly few) fans assembled to an overland journey in a far away place, and it’s nice to hear the story unfurl.

The masses appear from nowhere for 'Heavy' headliner Dizzee Rascal. Despite signs asking we 'leaf them be', limber fans clamber into trees, vying for a better view. Fresh from his Opening Ceremony showing, Dizzee tells us to "be safe out there”, and I fancy he is talking to those trees. Energetic, the pair (who is that guy with Dizzee all the time?) bounce through 'Road Rage' to new track 'Bassline', a preview from the forthcoming album due out in November. "Make some f*cking noise!" Dizzee commands, and we do.

“He's just a rascal, Dizzee Rascal" chime the crowd, this by far the most attended timeslot of the day. How many artists boast their own them song? After a relatively tame showing in Benicassim, Dizzee is on form, charging through a catalogue of chart toppers including 'Dirtee Disco' and 'You’ve Got The Dirtee Love'. There’s a theme here…In a weekend chiefly devoted to celebrating a shared nonchalance about the start of London's Olympics, Pepper makes a special appearance, joining Dizzee for Olympic collaboration 'Scream'. This particular performance is being filmed, with the promise "You're gonna be famous and sh*t!"

'Dance Wiv Me' is an obvious favourite, but it’s 'Holiday' for the finish and a glitter gun to boot. Dizzee dubs this an Instagram moment, the crowd welcoming his approval with yet more applause.

An aptly named Happy Slap Boutique is the spot to be by the early hours of Sunday morning, as the resident Happy Slap DJs spin their distinctive breed of Balkan, electro and swing to a heaving marquee. Here as elsewhere at the festival, twinkling fairylights serve to offset anything too hardcore, continuing the carnival theme. 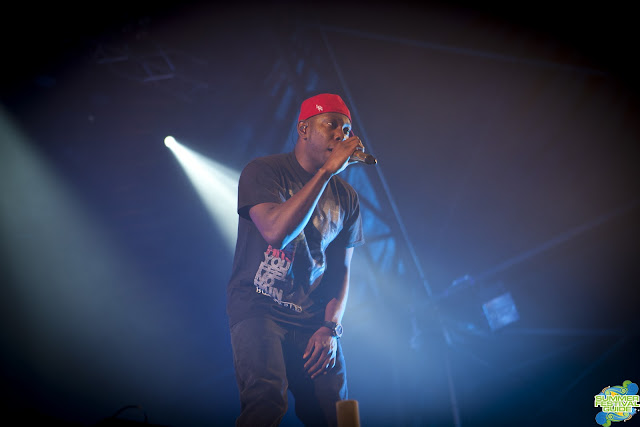 New Yorkers We Are Scientists set the standard for audience rapport on the main stage, delivering their upbeat breed of indie rock with a sophisticated sense of humour. Bassist Chris Cain fires off cheeky comedic quips, thanking one girl in a wedding dress “for taking this show seriously.” I roll my eyes when my fellow festivalian muses aloud “I wonder if they are scientists…”, but stop as it dawns that they might be.

The boys match the euphoria of a sunny Sunday afternoon, firing off intelligent tracks like ‘I Don’t Bite’, ‘Rules Don’t Stop’, and the one that made them, ‘Nobody Move, Nobody Get Hurt’. Needing no introduction, the immediate and urgent beat has much of the crowd up on shoulders, and a collective cheer erupts when one (shall we say, heavy-set) man successfully manages to stand atop a friend.

The theme for the weekend’s fancy dress component is fairytales and comic books. Some people have put incredible effort into their look, but it’s apparent that anything goes, like the wedding dress girl (unless she was Friday’s festival bride) or the countless wolves and bunny rabbits dressed in smart tweed suits. James haven’t dressed up when they take to the main stage, but it’s clear the packed-out field award them superhero status. Scheduled for nearly two hours, I tire quickly of the singalong affair, and although they sound in fine form I sneak away, prefering to discover something new.

Under the big top now, and the Calling Out stage is abuzz with talk ahead of Los Angeles act Vintage Trouble. Gracing Kendal Calling for a second year, this four man ‘juke music’ group ooze soulful style. Indeed, the collars, vests, hats, ties, even hairdos aid a welcome departure from the present day.

‘Nobody Told Me’ is a complete change of pace, and Taylor touchingly explains the song is for people in times of struggle. For a band only formed in 2010, these guys are convincing performers. When a pair of underwear is flung on-stage, you imagine this kind of thing is typical, but Taylor announces it’s the first g-string they’ve had. “You go down in history” he smiles, before launching into a tamborine-charged ‘Run Outta You’.

As things wind down (or up, depending who you are) on a massive weekend, Yes Sir Boss play to a handful of revellers on the Chai Wallahs stage, the rest of the festival evidently still singing along to James. An unlikely meld of brass and metal, the group play as if to a full house and those few appreciative fans go mad on the dancefloor. 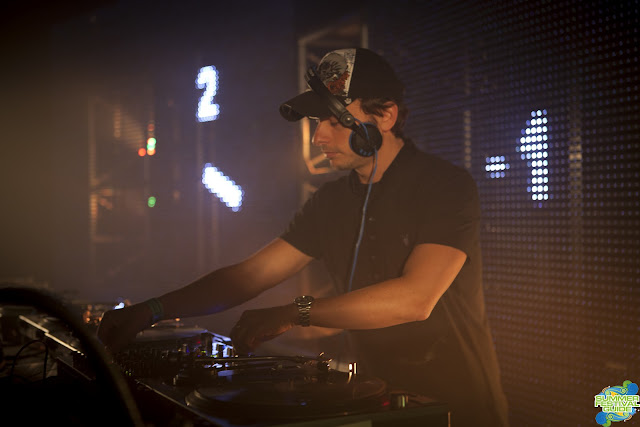 Somewhere between the official line-up and set times, acts like Alpines and Little Comet got lost. Or maybe I was lost – it’s that kind of festival! From the most chilled and intimate sideshows, to fun fair amusements, giant scrabble and a real ale party, there’s a little bit of Kendal for every mood (and a heap more if you’re the ‘I’m-at-a-festival-feeling-avant-garde-now’ type). I never made it to Kendal Calling’s so-called ‘Garden of Eden’. I suspect I was already there.