I was somewhat nervous and excited to be attending the Secret Garden Party.  All that I had read told me to leave my expectations and inhibitions at the door, and to join my fellow gardeners in four days of absolute freedom, games and spectacles.

The festival for us started in the massive queue to get on site on Thursday evening. We tuned in 87.9 – Secret FM and listened in to the dandies from The Gentleman’s Club (Arthur & Reginald), taking us through the stages of becoming a gentleman, “Gentleman must only smoke the finest cigars and port must not be passed to the left”.

The garden is set in the gorgeous grounds of a Cambridgeshire manor house, centered around a swimming lake. This years theme was Standing on Ceremony, however, this year is an extra special edition, in honor of their 10th birthday.

Walking around this site, even covered in mud, it’s clear to see it’s spell-blindingly beautiful. There are surreal sights to feast your eyes upon everywhere; art installations, bandstands, sideshows and non-stop parties dot the site.  The crowd are already on good form and looking equally bizarre – a knife & fork go by, then a globe globe, unicorns, aliens, geishas, a pack of cards, deep-sea divers and every animal conceivable. 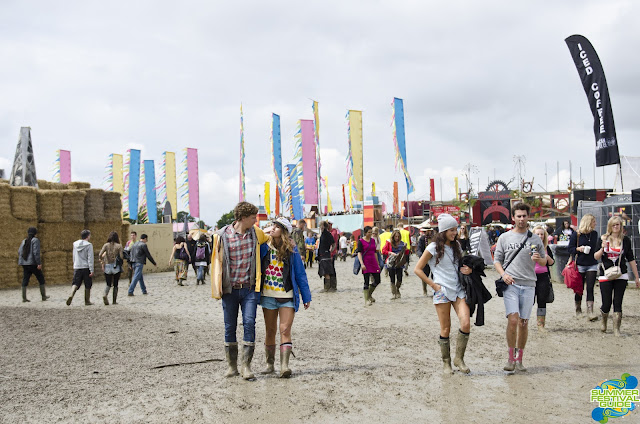 We head further into the site and stumble upon the Collo-silly-um – a hay baled, high walled arena where two punters are getting down and dirty in the mud wrestling pit.  It’s Britain vs. Germany and we actually win (is that a first)? The pants are off, rather than the gloves and this isn’t the first bit of nudity I’ve seen – its in abundance here. I feel my inhibitions loosening just a little bit…..shall I jump in? This festival is decadent, indulgent and hedonistic. It’s an enormous adult playground and you feel under the SPG magic spell as soon as you enter the site.

It’s clear to me by now that this festival is not all about the music – although, they do have some pretty good names on the bill. Friday afternoon saw Beth Jeans Houghton & The Hooves of Destiny take to the main stage. Beth clad in a hooded leotard, sang favourites ‘Dodecahedron’ and ‘Lilliputt’ to a small but appreciative crowd.

Evening comes and Alabama Shakes get things moving on the main stage with their Southern style grooves and thumbing bass riffs.  Followed by Little Dragon and finally Edward Sharpe & The Magnetic Zeros. Lead singer Alex Ebert with his hippie charisma kicked off his boots and leaped onto the barriers, the audience whip themselves up into frenzy. ‘Man on fire’ was the stand out track for me. The band closed things with the equally brilliant track ‘Home’, and the crowd were once more on their feet, singing along and dancing with their arms in the air.

On the way back to the campsite, we stop on the hill and take in a vista of the scenic site. By night it’s even more impressive, transformed by neon blues and greens illuminating the trees.

The mascara wearing comedian, songwriter and musician Tim Minchin got Saturdays proceedings underway on the main stage.  He joked ‘I’m surprised to see any one up this early’.  He raised the roof (well proverbially, if there was one) to a packed out crowd with his razor sharp satirical ditties on Jesus. 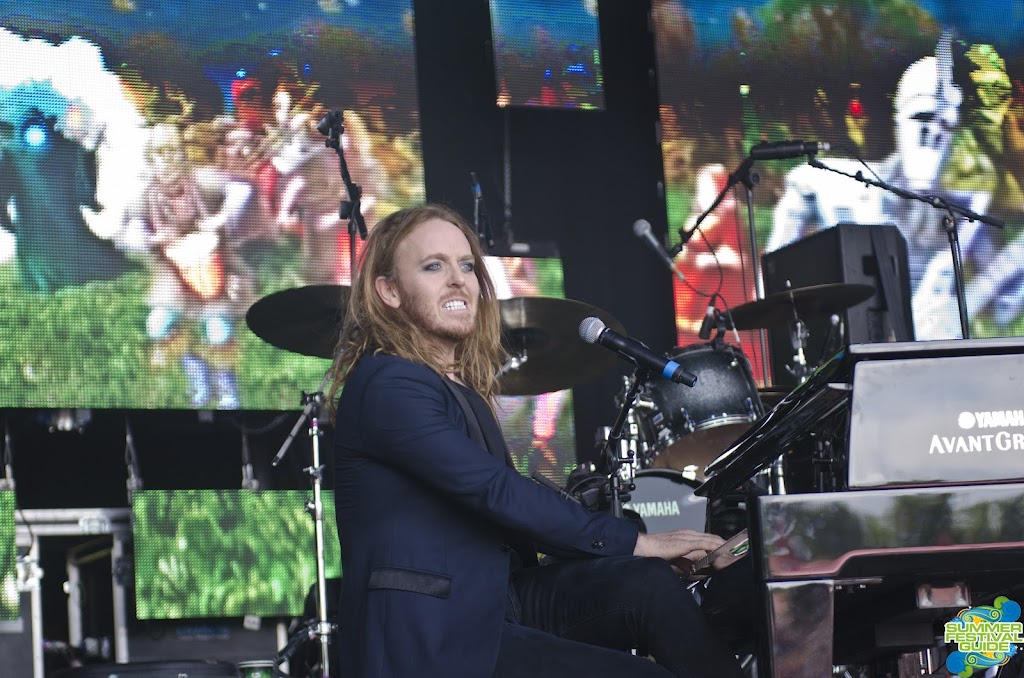 The sun was out in its full glory, which meant lake swimming and more naked liberation.  We caught a boat over to the Lake Stage where rumbling DnB sounds could be heard. From here you can see more people ‘shaking their stuff’ on the Pagoda Stage opposite. T.E.E.D, Jamie Jones and Seth Troxler are DJ’in here, but stage times are not listed, instead clues are hidden around the pagoda – shhh, it’s a secret.

Around the lakeside lies the ‘Where The Wild Things Are’ Stage, its front adorned with knotted and twisted tree branches.  This rather lovely stage is playing host to a good line up of new folk and up-and-coming bands over the four days, starting with Bastille. During the course of the weekend we see Ellen And The Escapades, We Were Evergreen, Lucy Rose, Daughter, Lianne La Havas and King Charles play to packed audiences.

What I am beginning to like more and more about SGP is that there is so much to get involved in, even if the music wasn’t your scene.  The organizers actively encourage that you don’t get hung up on seeing the bands and that you participate rather than be a spectator.  You can go punting, join a literary reading, have dance lessons, go swimming, ride a camel, take a hot tub under the blue skies.  I’m finding it impossible not to fall in love with this festival.

As darkness falls, we ready ourselves for the big birthday burn.  A crescendo of activities that starts with dozens of fire jugglers surrounding the lake, hundreds of neon balloons sent floating skywards, a breathtaking firework display and then the big climax. The Lake Stage is ignited and the flames roar into the blackened sky. It was truly phenomenal. Huge crowds swell the banks as far as your eye could see. SPG know how to put on an awe-inspiring ceremony.

Taking to the stage after the immense sights on the lake were Obital. They needed something epic to follow the pyrotechnics we had just witnessed. Never failing to please, the Hartnoll brothers with trademark headlamp glasses blew the audience away with projections, laser beams and some good old classics ‘Halcyon’ ‘Belfast’ and a 15 minutes version of ‘Chime’ to conclude this blissful set. 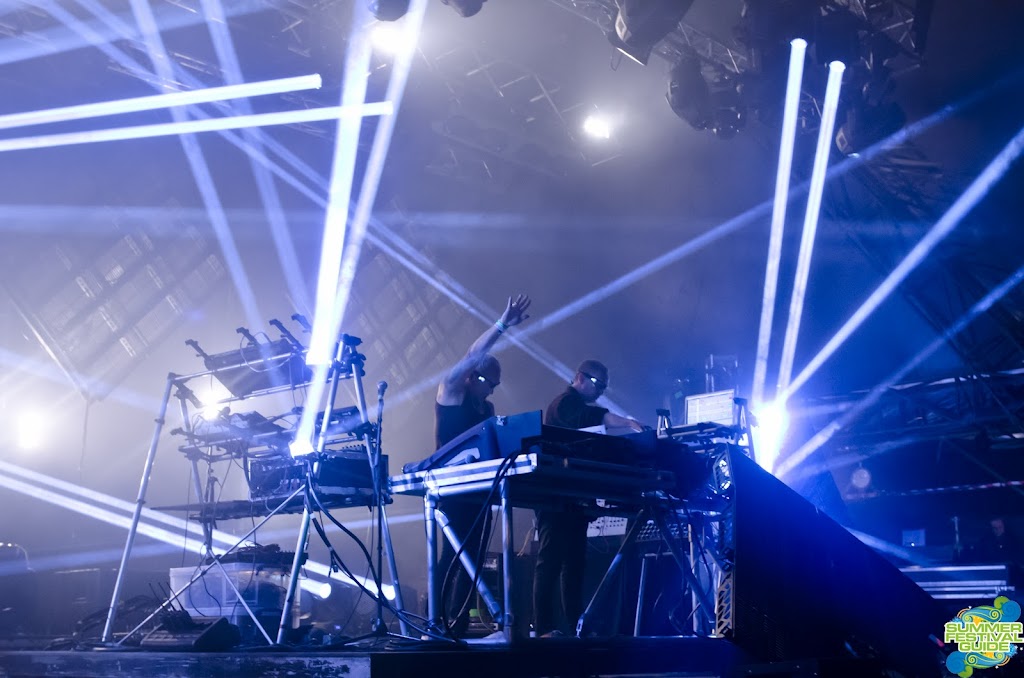 Sunday turns out to be a hot one and perfect for hanging out at The Dance-Off stage, a boxing ring where punters challenge each other to dance like an idiot to cheesy mash-ups.  There is some serious partying going on down there.

The merriment continues with the infamous paint fight at the main stage. Organizers hand out bags of powered pigment and before you know it people are multi-coloured from head to toe in garish, blue, yellow, purple and orange and the air is full of colourful dust.

In the evening we get ourselves into the north field in time for another birthday parade. Just when you think SPG couldn’t pull out any more surprises out of the bag, well they did.  From the skies came five parachutists landing on the lake, two planes that created a love heart in smoke trails in the sky, a carnival style procession with a band of foxes, a giant cake, a brass brand, camels trail.

Glastonbury may be taking a sabbatical this year, but there is no chance of festival goers feeling hard done by with this festival. I urge anyone who hasn’t been, to give this one a go.  You might not set foot on Worthy Farm again……but shhhh it’s a secret!

Click here to view photos from The Secret Garden Party