It would be impossible to write about Larmer Tree this year, without mentioning the mud and, in typical British spirit, the weather. So let’s get that out of the way. It’s been a bad year for festival organisers this year. Many outdoor shows and events have been cancelled up and down the country due to horrible weather patterns. A few days before I am meant to set off for Larmer Tree, I am constantly checking for updates, hoping it hasn’t been cancelled too. As it happens, the organisers seem to be doing a great job preparing for any unexpected circumstances, and I pack my things to leave. On the day I am meant to arrive, however, it is me who has the problem. Flooding and storms in my area have closed off my main route to the grounds, and disappointed I am forced to stay at home.

Luckily, the next day the roads are open and back in business and I set off first thing. It rains the whole way there, and when I arrive, it shows no sign of stopping. I am greeted by stewards and staff who are completely un-phased by the elements, and more than happy to help any of the arrivals.

Even against the dark grey sky, and through the sheets of rain, the first thing I notice when I enter the Larmer Tree Festival site, is the colour. Circus style marquees, flags, stalls and eateries are some of the most creative and vibrant I have seen at a festival. Stalls are selling the bizarre and the beautiful, from clothing to trinkets. And it doesn’t take long before a small wander makes my eyes several times larger than my belly and I instantly want to eat at least one of everything going. From fresh baked pizza, curries, Chinese food and pies, to having tea and crumpets served to you by corset-clad girls at Strumpets with Crumpets. All the favourites are here. Over the course of my weekend, I managed to try a fair amount of what is on offer, and it was all delicious.

Larmer Tree consists of five main venues; the Main Lawn hosts both a Main Stage and a Garden Stage, the Garden Stage hosting both live music and DJ’s who entertain during Main Stage changeovers. The Big Top (looks exactly as it sounds) holds both live bands and workshops that vary from Swing Dance to Didgeridoo lessons. The Arc is another circus style tent, it holds both seating and standing room, and is home to more live music and comedy. Club Larmer is home to Theatre and talks for adults, Film screenings and DJ events. The Social has a bohemian pub type feel, and is also home to live performances, and contains its own bar. On a walk through the Lost Wood and the Secret Garden, other smaller stages appear along with craft workshops and activities, including a Healing Zone where you can even get massages. The gardens also contain brilliant works of art and sculptures and I’m left thinking: “Is this a festival, or a cave of wonder?” 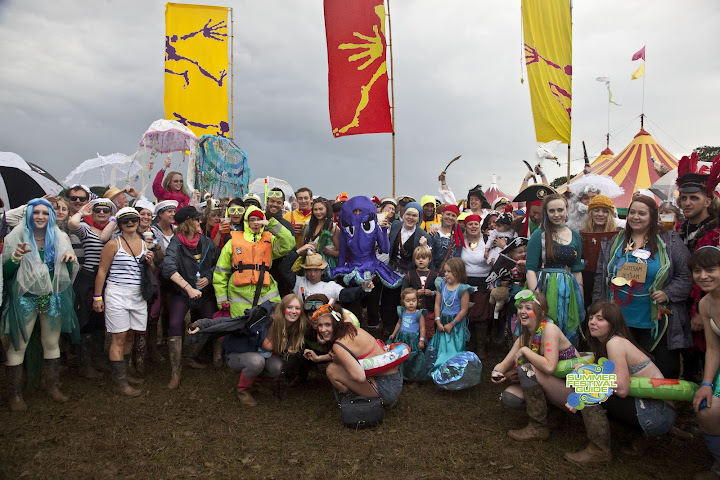 Stopping for a lunchtime pizza, and a very necessary cuppa, I am soaking but happy and enjoying myself. As is everyone I can see around me. Larmer Tree seems to attract an incredibly diverse audience; young families with young children, teenagers in groups on their own, middle aged and elderly people (judged by age, and absolutely not by spirit), and twenty-something’s like myself, and every one is more than welcome. I would like to add at this point that, age-wise, this is by far the most diverse festival I have ever been to. Larmer Tree really does seem to offer something for everyone, and it is clear from chatting to many people that I meet here that if you come once, you are most likely to return. Some people I speak with are so fond of this festival (returning 4-5 times), that they encourage me to ignore the relentless rain, hating the thought of me thinking anything negative about their beloved Larmer Tree festival.

First up are Bristol-based Yes Sir Boss, who do a great job warming up the crowd with an energetic set-list and a small horn section. Oh, and they have Joss Stone do a guest appearance with them too.

Next up on the Main Lawn is the exceptionally multi-talented comedian, singer, songwriter and musician, Tim Minchin. I knew he was talented, but I was not prepared for his brilliant showmanship and abundance of energy throughout the set. As soon as he walks out on stage the whole audience comes to life as they witness him jump around and throw his wellies in the air. By the end of the first song alone, he has jumped up and down on his piano stool while singing, and then continued to play on all fours. At the end of the first song he says one of my favourite things that I heard all weekend in the garden and forest style setting:

“Which one’s the Larmer Tree?”

Paloma Faith is Thursdays’ last main stage act. In all honesty, I knew she was a good singer, but I didn’t expect such a good performance and was very pleasantly surprised. Her vocals were brilliant, as was her showmanship, and the crowd leave the Main Lawn in a great spirits, ready to continue the party elsewhere in the grounds. 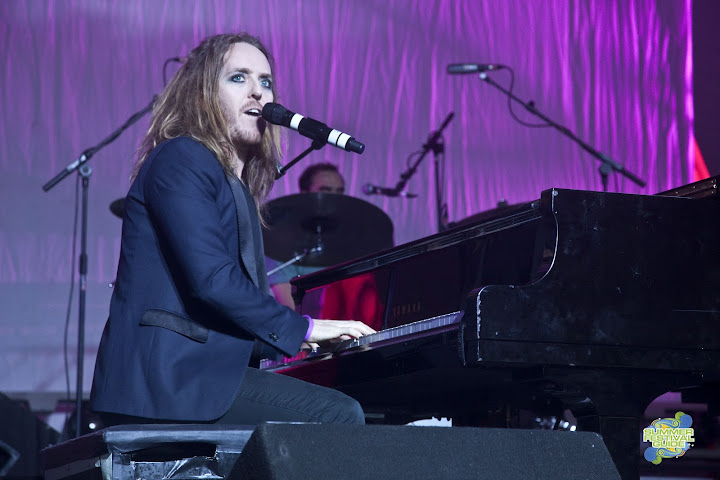 On Friday, the weather is thankfully much drier, although the aftermath of Thursdays’ rain is a huge amount of swamp-like mud. It still doesn’t affect anyone’s mood, and everyone seems to have fully embraced the conditions, determined to have a great weekend – even those who forgot to pack their wellies.

First of the three main stage acts of the evening are Dizraeli & The Small Gods. The seven piece folk-come-hiphop band manage to combine the two genres in a genuinely spine tingling way, entwining hiphop vocals from Dizraeli around stunning female vocal leads and harmonies and brilliant music. With such a talented first act of the evening, I know I must be in for a treat for the rest of the night: Dub Pistols, followed by The Levellers.

Dub Pistols are one of the liveliest and most entertaining bands I have seen so far over the last two days. Another genre mixing act, I can only describe them as trumpet fuelled hiphop, come ska punk, which turns out to be a great combination.

The Levellers give a great performance; only they seem to have attracted a different part of the Larmer Tree crowd than the earlier acts. Musically the eclectic use of instruments follows on well from their predecessors, however, attracting a slightly more mature audience there is quite the change over.

After the acts on the Main Lawn have finished for the evening, I explore some of the later events, and decide to head to The Social. While exploring in yesterdays rain, many people found themselves in this tent while sheltering from rain, enjoying the built in bar, some poetry reading and live music. Playing when I walk in, are a three piece band called The Wishbones, who turn out to be one of my favourite acts of the weekend; their line-up includes a banjo, lap steel guitar, double bass and great vocals. Unfortunately, acts in the social don’t feature on the main timetable, so I’m glad that I caught them, and will be keeping an eye on these guys.

When I leave The Social, a fire show is taking place outside. This sums up the festival, always something to do for everyone involved.

Saturday is a hugely diverse mix of sounds and cultures, and is also a fancy dress day where everyone is invited to dress to this years’ theme – All At Sea. Today’s Main Lawn acts feature GIVERS, Amadou & Mariam, and Caravan Palace; starting off with GIVERS, who seem to have quite the following, particularly among younger crowd members. They are among the youngest bands that I’ve seen here so far, clearly each member is incredibly talented and the crowd get behind them completely.

Amadou & Mariam are a duo that came together through their blindness, and they win everyone over with their uplifting musical sound (and brilliant guitar skills, I heard people saying “I can see fine and I’ll never be able to play that well”).

Caravan Palace are a lot of peoples must see act for this festival, and they supersede everyone’s expectations with a really amazing set, and I can’t help but dance while I’m taking photos. The general consensus is that no one has ever seen such beautiful people all in the same band, who each have so much energy and never stop dancing. The crowd danced just as much, and the entire field was jumping.

Still dancing, I head to The Arc, where I’m going to watch my first comedy act of the festival. Up tonight are Swedish comedian Daniel Simonson, Alun Cochrane, and Stephen K Amos, and Comedy Club Compere Tom Craine. This turns out to be a brilliant combination of comedic acts, the whole tent belly laughs and heckles like any good comedy audience should. 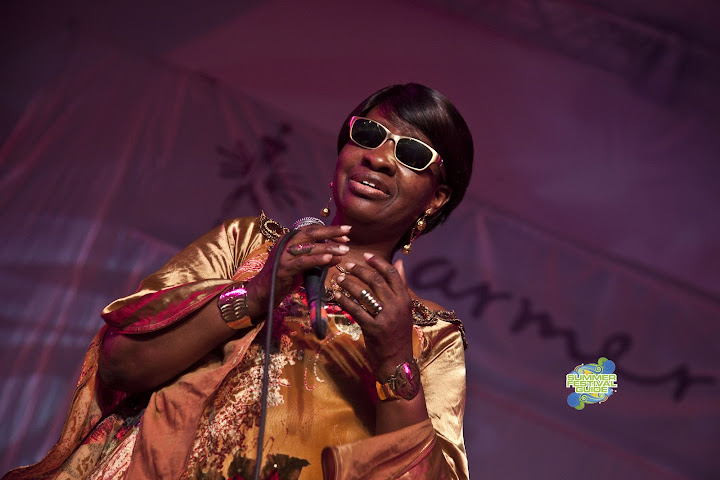 It’s late now, but the journey back to my tent is halted by the DJ sounds coming from The Social, and the idea of a late night pizza.

The sun comes out on Sunday, and sheds light on a carnival procession; The United Colours of Larmer Tree! This is a combination of crazy costumes and live music that ranges from Brazilian dance drums to Accordion based shanties, and many children who have made costumes in the Kids Club take part.

From the press area in the afternoon I hear Port Isaac’s Fisherman’s Friends sound-checking while I’m charging up my camera batteries, and a few of us run outside to see them on the main stage giving a rendition of The Drunken Sailor. It’s such a beautiful sound made by the vocal choir, and their set is fantastic. Another great act of the day is Otis Gibbs, who plays in The Arc.

I instantly fall in love with the first of the final main stage Larmer Tree acts, Raghu Dixit, who not only play great Indian folk-rock, but also seem to impart wisdom and wellbeing to the entire crowd.

Imagined Village take to the stage next, and the crowd love them so much that they are called up for an encore.

The last act set for the main lawn this year is Roots Manuva, who has a very different sound to the previous act, and got even the most reluctant dancers dancing.

So, that’s it for the Main Lawn, but as always in Larmer Tree there is still something left to do, tonight I head to The Big Top to see a performance from hiphop Shakespearian, Akala. Having seen Akala a few years ago, I know that he is a brilliant lyricist and master of words, and it’s great to see how his musical sound has developed.  There is just time to run on over to The Arc to catch another comedy act – Milton Jones, who is famed for his one-liner wittiness. The festival eventually ends at around 3am, with the ‘Uplifter’s Reggae Sessions’ that take place in Club Larmer.

To put it simply, this has been a fantastic weekend. Although this is a relatively tiny festival, there is so much to do, for absolutely everyone. What Larmer Tree may lack in the way of big festival names, it more than makes up for with a huge amount of hidden gems and surprises.