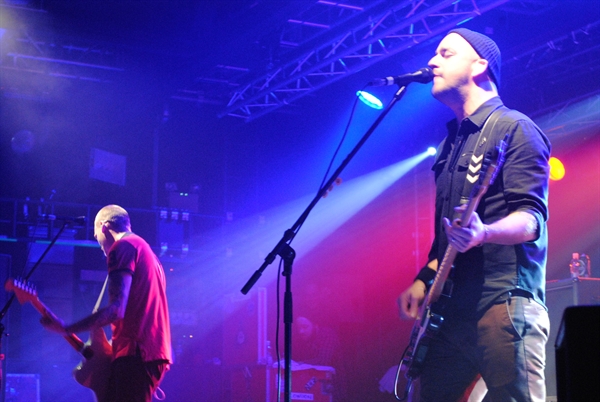 300 bands, 19 venues, a music expo, the student music awards and an industry conference crammed into 3 short days. Is it possible? Well according to Sound City, yes. Born in 2008 its grown from strength to strength and this year was set to bring bigger acts from a wider range of genres than ever before. Headliners included, Professor Green, Temper Trap and Alkaline Trio among a host of other local and international acts. Armed with a festival map and a list as long as our arms of bands we wanted to see, we headed down to check out the action.

After a few misses, another attempt with google maps, and some friendly bar staff we managed to find our first venue, a little later than we'd hoped, to catch the Mystery Jets, woo an audience back to optimism and a belief in love at first sight. The band was tight and sounded as harmonic as ever, and the crowd, loved every minute of it. We're not sure the venue itself was a real life music venue in its everyday existence, in fact, we're pretty certain it was a dressed up car garage, but, we'll give it to them, it worked.

Other highlights for us were Alkaline Trio, performing the last date of their European tour at the O2 academy and GhostPoet who played an intimate gig at a great boutique theatre style music venue called The Kazimier, performing tracks like 'Survive It' from his latest album Peanut Butter Blues and Melancholy Jam. If anyone had any doubt about this artist's skill and talent, they were forgotten by the time he finished with his infectious hit Cash and Carry Me Home.

Overall the festival was a mixture of chaos and good fun, if map reading isn’t your forte you may find yourself wandering aimlessly through the back alleys of Liverpool, but once you found where you wanted to be, you're sure to have a good night.