Arriving at the campsite on Friday we were greeted by a new look Bearded Theory, with more stages and more space across the scenic gardens of Kedlestone Hall. The festival grounds were dotted with models of giant cyborg rabbits and dancing robots and it was immediately clear, even very early in the weekend, that Bearded Theory was going to be a bigger event this year.

Throughout the weekend the dance tent was jumping with the younger and more beat minded festival goers. Serenaded by DJs including System 7, Zubzub, The Ashan Project and Banco De Gaia and entertained by some truly incredible and at times highly trippy visualisations, the dance tent was at much appreciated alternative for many at times over the weekend.

The other stages brought some of the best live acts in the world, young, old, new and established, everyone was represented at Bearded Theory 2012.

One of the first acts I came across was an old favourite of mine at the small, intimate Water's Edge stage. Over the last few years Jemma Johnson's name has become synonymous with top class festival performances. This talented young lady charms crowds wherever she goes and Bearded Theory this year was no exception. A stunning set of covers and originals that went further to cementing Jemma's place as a real rising star on the UK music scene.

Also entertaining crowds on Friday daytime was the 360 on the second stage, Tornado Town. A ska outfit who after many years of playing together appear to be gaining the recognition that they clearly deserve. A high octane, high energy, fun and skilled performance that set the crowd up perfectly for the party to come. 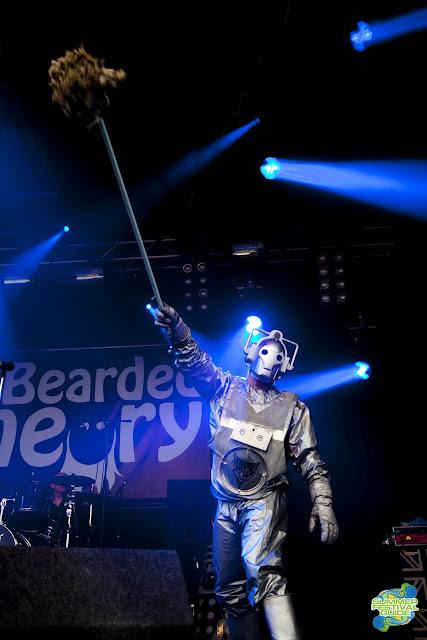 The first big name headliner of the weekend came in the shape of Doctor and the Medics. As the set began a cyberman took to the stage, with a mop. He then proceeded to use that mop to knock over model daleks, before picking them back up and placing them where they had previously been. An odd introduction, but somehow one you couldn't take your eyes off. Then the Doctor and his trusty Medics took to the stage, looking just as fabulous as they ever did. Dressed in a full length faux fur coat, the Doctor led his band through a series of rock and roll covers that had every crowd member bouncing along. Finishing, as expected, with their smash hit Spirit in the Sky, Doctor and the Medics did exactly what was expected of them, and they did it with style.

Everyone knows the feeling, you're watching a band who you've heard of, then they play a song you love and you have that "oh they did this song" moment. I have never had that sensation as many times as when watching Terrorvision on Friday night. I have always been a fan of Terrorvision, but I never realised how much. A full set of top class tunes back to back, performed with aplomb by their incredibly charismatic frontman Tony Wright made this the stand out set of the day and one of the best of the weekend. After breaking up for a number of years early in the millennium and going through a few reshuffles, Terrorvision are back and are firing on all cylinders.

The came the much anticipated headliner, the "one way or the other" performance. Unfortunately for all in attendance, it went the other. When the Levellers fiddle player gained an injury Adam Ant heroically stepped in to save the day. He then proceeded to produce one of the worst performances of the weekend. Perhaps hindered by taking to the stage after Terrovision's sublime performance, Adam's vocals seemed constantly flat and his performance and times touched on desperate. I am not one to revel in disparaging comments and I shall not change that now. To me I feel the performance can be summed up in one moment. Twenty minutes into the set, a man dressed in full Adam Ant costume and make up walked sullenly away from the arena and did not return.

For those who didn't want to stay for Adam Ant's performance, a phenomenal performance was happening at Tornado Town. Karl Phillips and the Midnight Ramblers bring something very different to the stage. A mix of rock, hip hop, dubstep and various other styles fronted by Karl's full throttle rap style. A man who does not mind offending a few people, Karl is an outspoken, brash and cocky individual, but that works perfectly with the style of the band. After a lot of unsurity at the beginning of the set, the band won over the crowd within a few songs and by the end of the performance the packed out tent was begging for more. 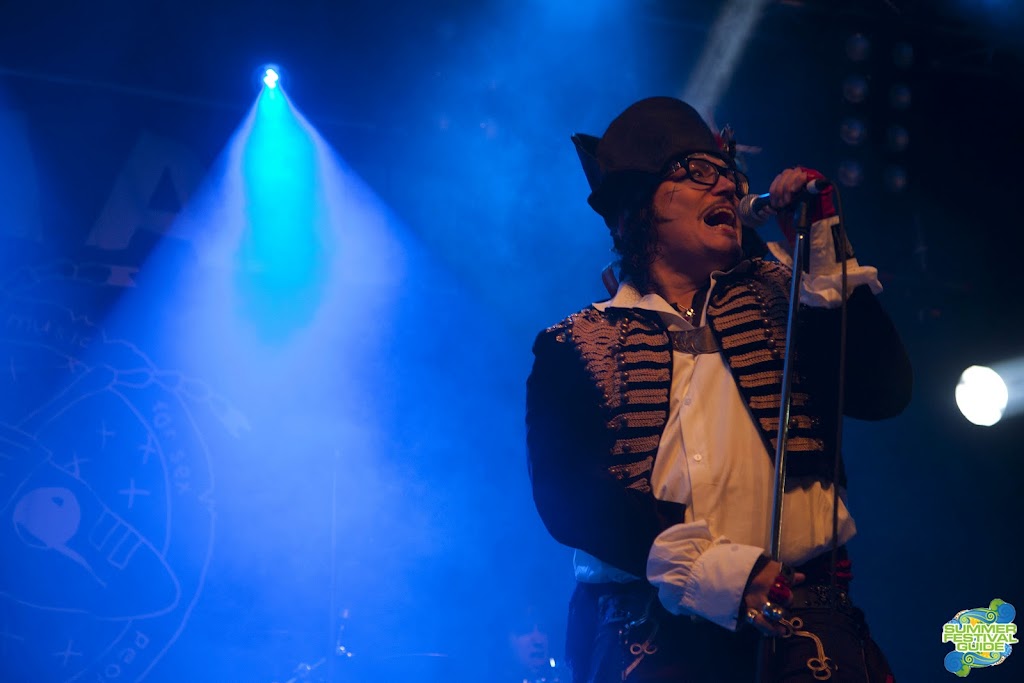 Saturday started slowly with a plethora of fairly generic, fairly average acts. There came a point where doubts started to fester about whether the momentum of Friday night would be lost. And then Cara Dillon happened. I have been a big Cara Dillon fan since the first folk festival I saw her at some years ago now and she is still going from strength to strength in terms of performance. The purest voice that has ever existed in music, Cara's first note brought silence across Kedlestone Hall, a respectful and awe-filled silence that remained for her whole set. With her very talented band, who had their own moments with some foot tapping jigs and reels. With possibly the best performance of the weekend, Cara Dillon single handedly changed the complexion of Saturday and from that point onwards it was one of the best festival days I have ever seen. 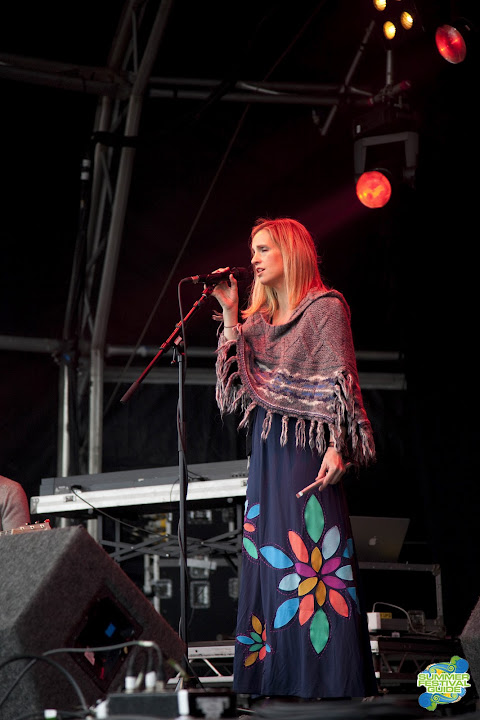 The soft, flowing folk sounds of Cara Dillon were echoed through the next two main stage acts. Show of Hands brought a beautiful set of strings and vocal harmonies, even with the unpleasantly grey weather that was a feature of the festival, the band still warmed the hearts of all festival goers with their mesmerising songs. Following Show of Hands was the legends that are The Popes. Folk standards, their own classic tunes, a smörgåsbord of folk instruments and an infectious charm and energy helped The Popes end a stunning three act line up and set the stage perfectly for the night's festivities.

Highlights from the other stages on Saturday came in the shape of power folksters Pronghorn, who whirled the crowd into a frenzy and ended their set with half of the audience on stage. Also outstanding were the Boot Hill All Stars, who presented some very original covers ranging from metal to pop, their versions of them ranged from folk, to punk, to ska. An effotrlessly entertaining performance and a chance for a good dance for all in attendance. 3 Daft Monkeys are the reason for Bearded Theory's existence, so their placement on the smaller Water's Edge stage was probably their choice. The intimate setting was perfect for the leftfield folk band but the volume issues that came with the stage were clearly an issue to the audience. Shouts of "turn it up" were heard throughout the set. Regardless of this, it was still a lovely performance.

Taking the crowd home through the rest of Saturday on the main stage were Dr. Feelgood and the Damned. Two classic acts, neither of which have lost a step. If anything it's possible that Dr. Feelgood have gained one. A virtuosic performance from the musicians, an unsurprisingly charismatic and energetic set, true wonder in musical form. The Damned were clearly highly anticipated by the packed out crowd, but unlike Adam Ant the night before, they did not disappoint. A stunning set of classic tunes to close out a spectacular day of live music.

Sunday's at festivals are traditionally a slower day, designed for those with two day hangovers. Bearded Theory understood this and built the day's music accordingly. Starting off the day in the Tornado Tent were Wheatus. Everybody went, because it was Wheatus, nobody was expecting to be amazed and nobody was, but a solid set from a band that are a cause of nostalgia for many.

The day stayed pretty chilled until the arrival of the Urban Voodoo Machine. Truly one of the most insane bands I have ever seen, in one of the most beautiful ways. With a beautiful young burlesque styled lady playing a tuba, a giant green drummer (playing one of two drum kits, the other was often played by another member to great effect) and a spectacularly dark front man, the band put on the live performance of the weekend. Stepping close to cabaret at times, but always keeping the quality of their music up, Urban Voodoo Machine were my personal find of the festival. Having not heard them before, I shall be attending many more of their shows in the future.

One of my favourite bands in the world played the main stage on Sunday. To many, Chumbawamba are famous for only one song, to those who know them better, they are one of the best folk bands on the planet. Chumbawamba produced their trademark minimalist performance. Many of their tracks are entirely a capella, or using small amounts of percussion. The sparse and slight use of a trumpet is a beautiful touch, adding to the flowing harmonies of the five voices that at times sound like 20. Political statement, social commentary and rebellion has always been close to the band's heart and their songs continue to reflect this, in their words "because they still have to." The stand out performance of Sunday and many who turned up expecting to hear Tubthumping, which they didn't, became Chumbawamba fans on the spot. 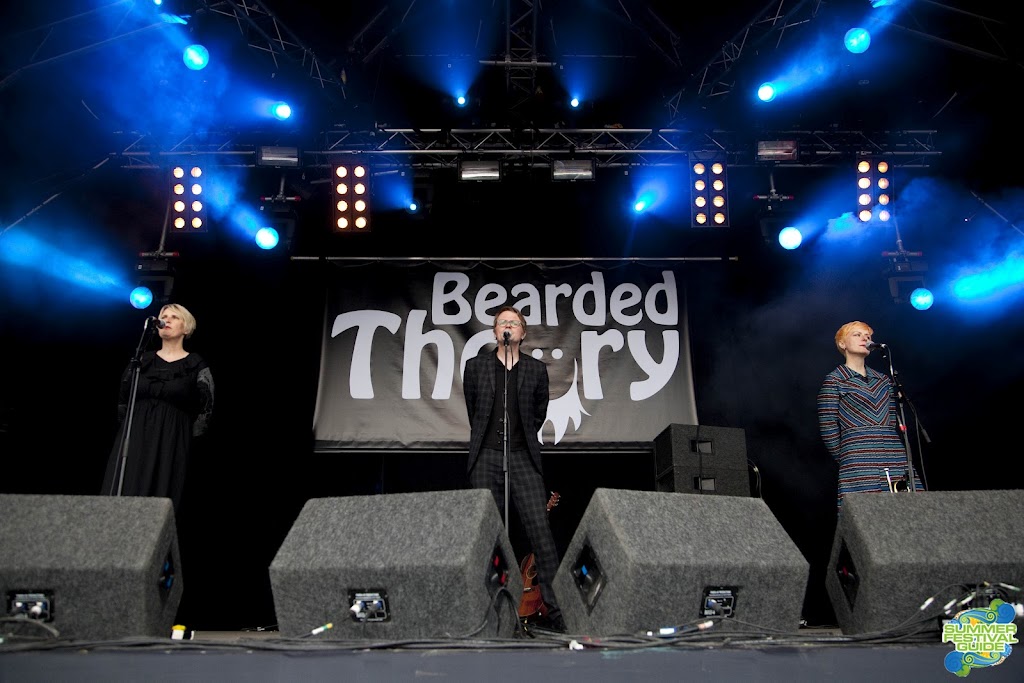 Then came the close down for the evening, in the shape of three performances which managed to be both full of energy and wonderfully chilled out at the same time. Ska legends The Selector came first, all the classic tracks of the 2-Tone days sounded as good now as they did then, a great performance. Following on were the unpigeonholeable band that is Kissmet. Mixing bangra, hip hop, rock, folk, ska and many more styles than I can mention, Kissmet were possibly the most intriguing band of the weekend. The mixtures didn't always work, but even when they didn't, they still kind of did. Then came the official end to the weekend, in the shape of Reggae dance act Dreadzone. Just the most blissfully chilled out way to end a festival weekend, they sent everyone off with massive smiles on their faces, tunes in their hearts and high expectations already forming for next year's festival. 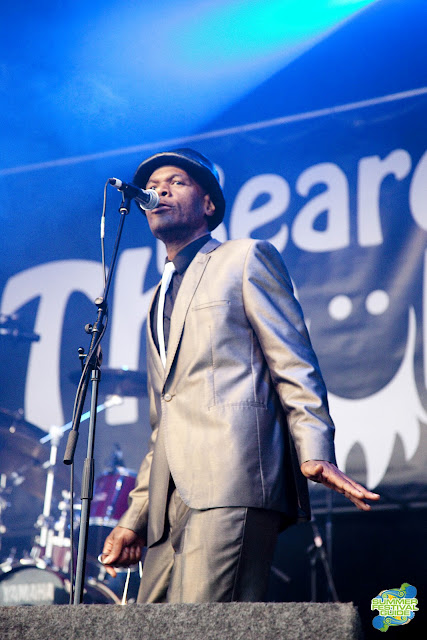 The first festival on the official calender, Bearded Theory has to set the tone for the year. Based on this weekend's events, it's going to be a real challenge for anyone to wrestle the Best Independent Festival honours away from the Bearded crew this year. A spectacular beginning to the summer, even with all the rain.