Home > Interviews > Talking Teriyaki, Musical Influences and Googleability at Leefest with Get Inuit. 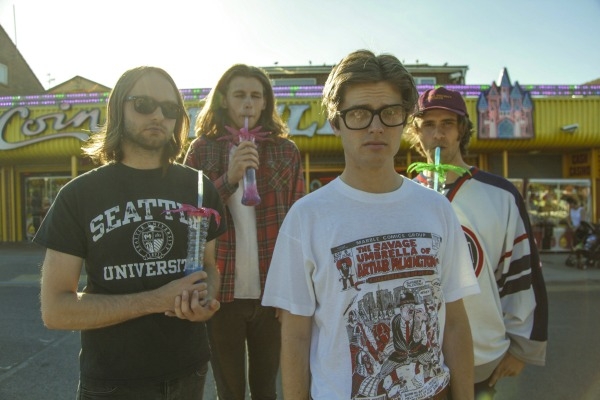 Indie-rock, dirty pop, lo-fi garage sounds, these days it’s getting harder and harder to characterise a good band – something the guys of Get Inuit find slightly hard to do themselves. Described as dirty pop, I asked Ollie and James, two of the boys in the band, about how they would choose to label their own sound.

‘I guess we would say it’s poppy, dirty pop. People tend to shy away from that term and lean towards indie or rock, but I think our songs are quite catchy and they do quite fit the genre, we describe it as a dirty guitar pop.’

When asked about their influences, the answer was just as mismatched. ‘As a band we have a lot of different influences, which I think is good, it comes through the music and gives us our sound. We’re all fans of the American grunge rock scene, bands like Nirvana and Sonic Youth, but we also differ on a lot of bands as well, bands like the Beach Boys, and also really cheesy bubblegum pop, guilty pleasures like Katy Perry.’ The band adopt a similar carefree attitude when it comes to the meaning behind the band name. 'It's kind of a joke, it came to the point where we just wanted something that was going to come up on google. I don't know how we actually settled on it. ​It's like a play on get into it, but it's actually in an episode of Spaced. It was Jamie's [lead singer] fault really, blame him.'

After being together for about two and a half years now (on their watch) it’s just in the past twelve months that they’ve really perfected that ‘fine-tuned fuzz’ sound they now execute so beautifully in their live shows. Riding the wave alongside bands such as Spring Kings, Vant and The Magic Gang, the band have certainly had a lot of up’s this year, which doesn’t seem to be changing anytime soon. They’ve just finished a tour with Spring Kings before the start of festival season, and are now tearing up the summer; stage after stage. With an electrifying, energetic show at Leefest, making myself a true convert, a Friday slot at Reading Festival, and an upcoming tour starting October with old friends Spring Kings, the boys have a lot to look forward to.

‘That will be a pretty big one [on the Spring Kings tour] much bigger than the one we just left, we’re playing much bigger venues, we’ve got KoKo in London as well as a couple of academies, so that’s going to be fun to play, plus the guys from Spring Kings are so lovely, so it should be a really good tour, we’re looking forward to it.’

Leefest itself showed the kind of hype the band is getting. Though a tiny festival tucked away in the Garden of England, it’s clear the southeast is Get Inuit’s home turf, the amount of merch floating around and buzz around their set shows the band is definitely headed in the right direction, even though they stay humble and a little surprised when asked about it.

This weekend is a big one for the band, as it sees the pre-release of ‘Teriyaki,’ their electrifying new single. Catchy, but with a rocky, distorted edge, Teriyaki is an intense track. Bursting with energy that’s reminiscent of their live shows, the guitar and drum work compliments each other perfectly, and songwriter/lead singer Jamie delivers on a lyrically mesmerising pop-chorus, that will have you singing ‘I can’t remember who I was before’ way after the song has finished. Listen to it here via Soundcloud before it’s official digital release on September 2nd.

With a list of dates lasting well into October, I fully recommend catching these boys live. With support from DIY, NME and Gigwise to name a few, I’m sure these lovely, joking lads are going to go from strength to strength, so see them before their shows sell out.