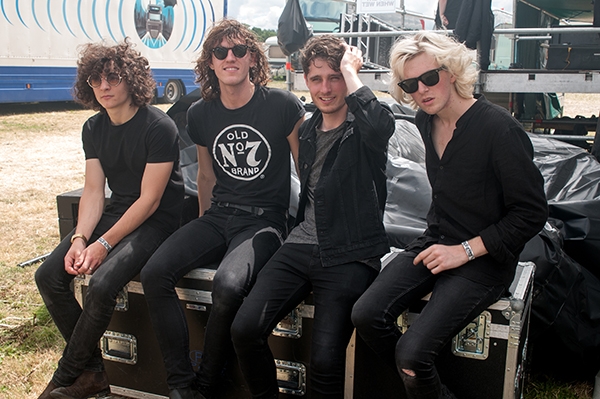 So, first of all, what are your names and what roles do each of you play within the band?

James: My names James, and I motivate everyone. (Laughter) And I play the bass.

Todd: Hi, I’m Todd and I play the guitar.

John: I’m John. I’m the superstar of the band.

Where did the name ‘JUDAS’ come from?

John: No, it was disciples names, so we were gunna be called The Disciples, which we liked, but Sam wasn’t a disciple so we called him Judas – and then the name came about.

And now Todd has messed it all up…

What would you say your influences are, and what genre would you put yourselves in?

Sam: We’re probably the best one.

James: Yeah, the best one.

Todd: We always get told we’re U2 and Kings of Leon, Arctic Monkeys.

Sam: It’s a cross between alternative and Indie Rock, I think. We try not to sound like anything in particular.

Sam: It’s extensive. It starts and Natasha Beddingfield and ends at…

What other festivals have you done?

Sam: Man on the Farm.

James: We’ve got Y Not? and Tramlines coming up and Party in the Pines.

How does Truck Festival compare to others?

Todd: One of the best.

Todd: We’re lucky enough to play the main stage here as well which is absolutely amazing.

John: Yeah, thank you so much to the power.

What made you apply for the Band App?

Sam: We just saw it.

James: Obviously, we have friends in other bands and we saw that they were applying, and we thought “Fuck it, we’ll apply”, and we bloody got it.

John: Apparently there was 850 bands applied and we won, so…

Sam: We didn’t win on the votes or anything, but we got chosen by the dudes that run the festival.

John: We did win on the votes.

Todd: Yeah, we won on votes as well.

John: Yeah, that’s why we’re on the main stage. We won everything, mate.

Sam: So… we won everything. So out of 850 bands we’re better than everyone. (Laughter)

Is there anything you want to say?

John: We’ve got a new EP coming out with some absolute crackers on it.

Sam: If you see us around say hi because we actually like people.

Sam: And we’re all single!

When’s the EP due?

Sam: You’ll know when it’s out.