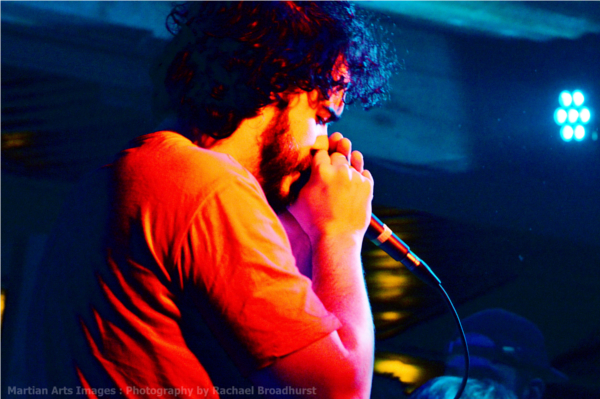 The Scribes are a unique up-and-coming hip hop trio, who have performed sell-out gigs across Europe. As winners of EatMusic’s ‘Best Live Act’ award, their stage shows are a real tour de force; combining crowd participation with thought-provoking lyricism. I join lead vocalist Shaun before the launch of the band’s latest album, A Story All About How.

So tonight is the album launch. Congratulations! How long has the album been in the making?

Since the dawn of time! At least, that's what it feels like. It's definitely taken a while due to the amount of gigging we've been doing, the amount of time taken up with signing the Kamikazi Airlines deal and me generally being far too much of a perfectionist about the whole thing.

It has probably taken about 2 years, maybe more. It’s been an arduous but rewarding process and we had help from some really talented musicians along the way; Jake Galvin, Jack Joyce, Kenny Hectyc and more, which made a huge difference.

With the album being totally sample free and heavily featuring live instrumentation, it does take a bit longer to pull together than some of our more traditional hip hop releases but I’m honestly chuffed to bits with the results. I couldn’t be happier with the final record and it’s going down really well with early press so that’s a good sign, I just hope people enjoy it as much as we do.

Do you have a favourite track from the album?

That really is a hard question! I’ve changed my mind about my favourite track about twenty times throughout the process of making the record. We whittled the 16 final songs down from about 30 that we had, so the standard was set pretty high to get on there. Well, pretty high in our minds at least! If you’re really going to push me I’d say my favourite song at the moment is probably La Mancha; it is one of the rockier numbers on the record and it has really grown on me. Actually, can I change my mind? It’s CONvictions. I have had it stuck in my head after hearing it again on a radio show and I think it’s just a really solid track. Conceptually and musically, I thoroughly enjoy it. But then, it would probably be worrying if I didn’t!

Is this album different from your previous work?

I think it is the natural progression from our previous work, so yeah, it is a bit different. It’s more musical, more melodic. It’s still firmly rooted in hip hop when it comes to the beats and the big bass, but it has got a lot of guitars and synths in the mix. I think it’s definitely our sound. It is uniquely us and doesn’t really sound a whole lot like anything else out there. We have spent years experimenting and refining our style; learning new things and improving what we do. The thing is, personally I hope that we will always keep evolving as a band. We will keep on creating new sounds and trying new things. If it’s not too pretentious to say so, I think the record is a marker point on a journey that will hopefully never end, but is definitely a complete and finished article in itself, if that makes sense. Does that make sense? It’s probably best that people have a listen and decide for themselves!

What is your favourite thing about the live shows?

I love live shows. The travelling is a bit of a pain sometimes and you can get on each other’s nerves a bit on the road (especially when you get lost) but being on stage performing your music for people is one of the best feelings in the world. We have spent the last few months in the studio finishing this record, so going out, playing the songs and seeing a crowd react to the music is something genuinely special. When a new track goes off and a crowd goes mental for it, you really can’t beat it. I don’t really know if I’ve got a favourite bit to be honest. It’s all good! We have a lot of fun on stage with each other; there is a lot of joking and such like. Interacting with people is a big part of it too. We do a lot of freestyle stuff live and crowd participation which is always a joy. Plus the songs mean a lot to me, so it’s always nice to vent them on stage! Plus we get to do it all together as friends. So through all the ups and downs, the big shows and the small ones, the sell outs and the wash outs, we always have a laugh.

What show are you looking forward to most this year?

Tonight is going to be special with the album launch and people getting a first chance to hear some of the tracks, so that’ll be cool. I tend to take it one show at a time but festival season is always fun so we’ll see what that brings. Boomtown last year was a beast so that will be hard to top but I’m sure we’ll manage.

How would you describe your sound?

With great difficulty! We’ve had lengthy discussions about how to describe ourselves genre-wise. I think we settled on ‘alternative electro hip hop’ which really doesn’t tell you much! We’ve got hip hop beats, we’ve got some booming bass, some funkier bass. We’ve got strings, synths, lots of guitars. We’ve got raps, we’ve got singing, we’ve everything you could ever want really, all pulled together in our own chaotic style. One of the songs on the record calledA Wake is pretty much punky drum and bass so we cover a lot of ground, but there is definitely something about the sound of it all that stays consistent. At least hopefully. It is definitely different which makes it really hard to draw comparisons. I think we might have to start going with ‘Scribes-hop’!

Finally, who would win in a fight?

Well, being the cool kid I am, I did go to a professional wrestling school briefly, so I can throw a mean suplex and cut a super sweet promo. That would definitely give me an edge in the build up to the fight, provided I can find my trunks and my entrance cape. Lacey has been hitting up the insanity work out lately and keeps flexing at me all the time to prove it. As much as I hate to admit it, he is looking pretty trim so he’d probably have the edge fitness wise.  The thing is though, for some reason despite not working out ever, Jonny is naturally built like a mahogany Spartan. He has been since we were kids as far as I can remember. So unless Lacey and I form some kind of dastardly alliance, I think he might take the crown.

The Scribes latest album A Story All About How was released on January 29th 2015 and is available on itunes, Amazon, Spotify and all good online retailers.