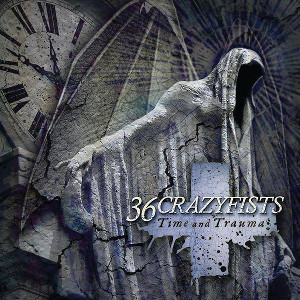 It’s the first stop on the 36 Crazy Fists’ album tour. The venue is practically overflowing with nu-metalheads eager to welcome back the US-based band after a 5 year break from the scene. I manage to grab lead vocalist Brock Lindow for a quick chat before they hit the stage.

So your seventh album Time and Trauma is on the horizon and last year marked your twentieth year together as a band. Is it difficult to come up with new material?

I don’t think so. I love music and it’s been a huge part of my life. We definitely won’t be touring forever, but creating and writing songs has got to be something I do forever because it’s been such a huge outlet for me. It’s not easy but it’s what I really dig.

Is it quite hard to find inspiration now, or is it just as easy as when you first started?

My inspiration all comes from my life. I don’t write about really religious or worldly topics; maybe somewhat, but only how they relate to me. The entire album Time and Trauma is about the process of losing a loved one. My mum passed away from cancer three years ago and so the entire record is about that piece of my life. The inspiration for songs is just what is going on in your life. It’s like a time-vault. With every album, I know exactly where I was at that time. It’s not hard to come up with inspiration.

It has been about 5 years since the last album. Is Time and Trauma quite different from your previous work?

I think it’s more comparable to the early stuff as opposed to the last couple of albums. That’s mostly because I wanted to get back to the singing style instead of just screaming all the time. So the vocal approach was a little different.   We have released three songs now on itunes before the launch of the album and a lot of people are excited that it sounds like the early stuff which makes me happy.

I absolutely love the track Also am I. I have been singing it all day and torturing everyone! Was that always going to be the single or did you decide that later on?

I didn't even decide it. It was more of a collective idea because the people outside of the band who work for us thought that it showed all of the facets of our sound. I love the song, so I'm cool with it.

This is the first date of twenty eighty in the tour. Is there anywhere in particular that you’re looking forward to?

I have been counting down the seconds on the clock for weeks to start this tour. There is a reason that we started in the UK; it’s the first country that really embraced our band outside of Alaska where we’re from. I don’t think we've ever played here in Plymouth before, so that’s great. Years ago we went to a place called Yeovil and sadly we never went back. It was the most insane show! It was this little clubhouse and there were kids diving off of the balcony. We have been touring the UK since 2001, and I dig going to places we haven’t been to before. Bristol and London really go off. They are all good. UK rules.

So who is the most likely member of the band to act up on the tour?

I think everybody is pretty good. We like to have a good time. We flew in yesterday morning and when we got here at 7:30am, it’s really 10:30pm where we were the night before. It’s closer to either going out or bedtime, one of the two. Yesterday, we just powered through the whole day in London and went out. I almost got hit by a car! Today, the work starts and everybody is a little under the weather so you've got to have your hip-flask with you. But everybody is ready to have fun.

Finally, what is your favourite thing about being on the road?

Playing the shows, definitely. The connection with the people. Getting to hear your songs sung back to you is always killer and the UK seems to one of the best at that for sure. The rest of the tour; some is really fun and the rest is a bit like Groundhog Day. But the one hour of the day when you’re doing the show is the best part for sure.

Well thank you very much for giving me your time and good luck with the rest of the tour.

No problem. Thank you for the coverage.

36 Crazyfists new album Time and Trauma is available in the UK from February 16th 2015.

Check out all of the Rachael's photos here: http://www.facebook.com/martianartsimages