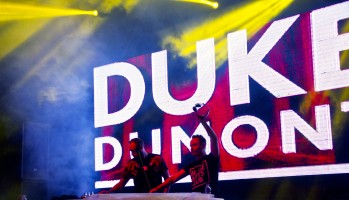 A few years ago, Duke Dumont was nearly forced to give up his career as a DJ and producer in favour of one that was actually going to pay the bills. Fortunately, his luck turned around and he subsequently went on to top the chart twice in the past two years. It was 2013′s club banger ‘Need U (100%)’ that kickstarted his meteoric success, then along came the summer anthem ‘I Got U,’ released earlier this year, to prove he’s no one-trick-pony.

A producer first and foremost, he also runs his own record label Blasé Boys Club and is now armed with a new track ‘Won’t Look Back’ showing plenty of commercial promise. It is safe to say Adam Dyment (aka Duke Dumont) is one of the most in-demand figures in electronic music, so we were lucky to catch five minutes of his time for a little chat. Here he talks to SFG about Ibiza, festivals and upcoming plans with Blasé Boys Club before his set at Hideout Festival 2014.

So you’ve just flown in from Ibiza, how was the journey?

The flight was a nightmare, but Ibiza was amazing – it was my first live residency at Sankeys. It couldn’t have gone any better, so hopefully it stays as good as throughout the season. Speaking about travelling, as a DJ I think the best way to look at it is: you get paid to travel; not to DJ. DJ’ing is the fun bit. Travelling can be a nightmare. You get paid to do that, but what I’m about to do in thirty minutes that’s the fun part.

Have you been to Croatia before?

I have about six years ago. It’s been ages since I’ve been here but unfortunately I don’t have much time here. I have to shoot off back to London tomorrow but it would have been nice to stay here a bit longer. Last time I was here it was a bit more chilled out, Hideout seems a bit more full-on. I’ve counted about four stages so far, so I’m going to be quite self-contained and not look around too much and just go straight on to the stage and just concentrate on that.

Could Croatia be the new Ibiza?

I think it’s getting a lot more popular. A lot more of the British contingent are over here. I haven’t really experienced Croatia enough to pass an accurate comment but I know Hideout is maybe more underground than what Ibiza is, but then again, Ibiza does have quite an underground element now than what it had five years ago. We’ll wait and see how it goes but it’s definitely growing out here compared to when I first came. Hideout is definitely one to watch out for!

So how is your label Blasé Boys Club going?

It’s going alright! I’m a record producer first and foremost, I’m a DJ and have started my own label and I’m hopefully going to be starting my own radio show very soon and I want to try my hand at many things. The label is going really well. I’ve signed two acts: Jax Jones – who sings on I Got U – and another artist called Kiwi. I’m hopefully going to sign my third next week, but I can’t say who that is yet although I really want to, but anyone who is into the UK house music scene will know the guy. And then maybe one more act this year, and work on my own music, the album’s on the label and next year… we’ll see how it goes!

Need U, no. It’s kind of like a happy mistake in the way it was produced and
came about. Originally it was going to be one of our club E.P’s before we called in a vocal and it gave it more of a pop feel. There was no grand plan behind it – the radio picked it up early and started playing it and suddenly people were going out and buying it. It was as innocent a number one as you’re going to get. Then with I Got U, that was a little bit more, ‘we had success with Need U, so let’s try and replicate that.’

What’s your favourite festival to play at?

Bestival is probably one of only a few festivals I’d actually pay to go to myself. And the other one is Coachella, I had a really good time there.

What about your new single, Won’t Look Back?

Again, since Need U, things got bigger and a bit more serious. I Got U came after Need U and hopefully Won’t Look Back will come after I Got U. It’s all come together well. There’s an album coming out and all the songs will be on that. There will probably be two more singles after Won’t Look Back towards the end of the year, they’re already recorded it’s just a case of holding them back for a while.

What do you think of the current house music scene?

The popularity's here, because chart music has been staggering for the last five years or so, so house music is providing a different option. And I hope in five years’ time there’s another option to house music. So as long as popular culture is constantly changing and isn’t staggering, then it’s all good!