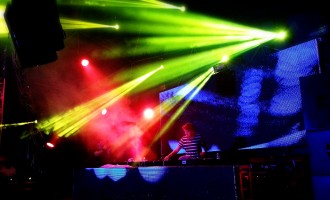 Last year, Ben Pearce dominated the charts with the catchy ‘What I Might Do’ becoming one of 2013’s most prominent anthems. The track saw the Manchester-based DJ and producer shoot to fame and is still in heavy circulation in club playlists today. In between a hectic touring schedule, he is also creative director at his own record label and DJ agency Purp & Soul.

Despite having just arrived in Croatia straight from Ibiza, Pearce managed to grant us a quick moment to chat about his smash hit, his hectic summer schedule and his favorite festivals. Here he talks to Sayuri Standing and Ben Jolley before his set at Hideout Festival 2014.

So have you just got into Croatia then?

Yeah, about three hours ago. We came straight from Ibiza after I played at Amnesia last night.

Who else are you hoping to see around here?

F**k knows! John Talabot’s on tonight so I really wanna see him but I think we are playing at pretty much the same time which is annoying. And then, I don’t know, Route 94’s on after me, I’ll watch him. Skream’s on at the same time as me. I haven’t really looked at the set times yet, I’m going to look at them more tomorrow properly, hopefully. I try not to plan festivals because there are so many people that you meet, friends that you’ve not seen for like a year so you never actually get round to watching anyone.

Are you planning on sticking around for a bit?

Yeah, for a couple of days. We’re doing a boat party tomorrow and then I’m going to go to Garden Festival after that for a bit of a holiday.

Have you been to Hideout before?

Yeah, I played last year for the first time. It was great fun, just insane. It’s on a different level!

Is there a variation between club sets and festival sets?

Kind of, maybe a bit more just high energy stuff because you can’t really play big breakdowns in festivals because everyone will just go to sleep and get bored. There’s no plan in my head, but I guess there is a quite a big variation.

Did you expect ‘What I Might Do’ to be as big as it was?

No! I never expected it to get signed, let alone anything else so it was a bit of shock.

Your new Lego E.P was released recently, what other music have you got lined up?

I’m working on quite a bit of stuff at the moment, just different projects with different people and some of my own stuff. A couple of singers, one – Anna Holder – she’s really talented, and a Dutch artist, whose name I can’t give away right now. Because I’ve been touring so much, I’ve not been in the studio for about six weeks, so hopefully after summer I’ll get to the stage where I’m making more music and I can bash out a few more tunes!

Where else are you playing over the summer?

Everywhere really! I’m back in the US at the end of August. Loads of festivals in the UK, I’ve still got Reading and Leeds and also Lovebox, which will be really good. I really don’t know what else but quite a lot – I’m very busy. June has been crazy but it’s kind of calming down a little bit, but it’s still mental.

What’s your favourite thing about festivals?

Just the range of music you can get really, ‘coz usually when you go into a club, it’s very much ‘this is what’s happening’ – unless you go to a Fabric night where there are loads of people on – but festivals there can be anyone. I’m really liking European festivals a bit more because you can get a hip-hop stage, a death metal stage, a main stage, a house then techno stage – there’s so many genres. That’s what I like about it because you can wander around the different stages and discover things which you might not have seen before.

What is your favourite festival to play at?

Oh, that’s impossible to answer. Secret Garden Party’s really good, I did it for the first time last year and it’s so f**king good. It’s kind of like a mini Bestival, it’s got that kind of Glastonbury, Bestival feel to it – a bit boutique and a bit odd, but really good. I always really enjoy that one so I’m looking forward to playing there again.

Do you think Croatia could potentially become the new Ibiza?

Yeah, it’s looking like it! I think the money is a big factor because Ibiza is what it is, it’s just really expensive. It’s 14 euros a beer in some clubs and 50 euros to get in so it’s become that kind of status thing and fair enough if you can do it. But I think Croatia’s something new and it’s got a big appeal to it because Ibiza has been around for years since I was growing up. Now, Croatia’s new, it’s something different and it’s a beautiful country. Absolutely amazing driving around it, the views are insane. So definitely, if more people get into it, it’ll easily be on the rise.

What would you be doing if you weren’t a DJ or producer?

I was working in a bank before at a call centre as a complaints manager so I was doing that and then still DJ’ing on the weekends and kind of gave that up just as this started really kicking off, so I just kind of left it till the last minute.

How would you sum up your set in three words?

As published on Platform magazine: http://platform-online.net/2014/07/exclusive-interview-ben-pearce-at-hideout-festival-2014/?utm_source=twitterfeed&utm_medium=twitter