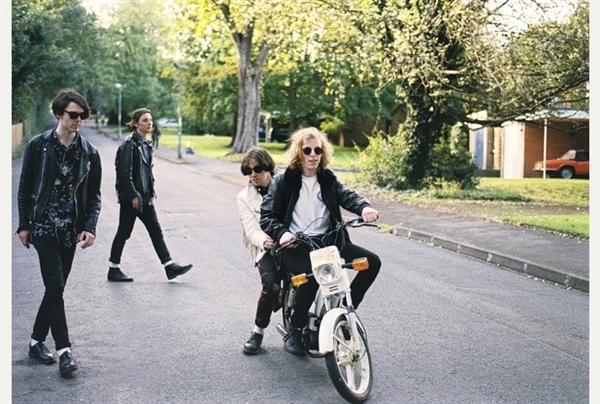 A year since Birmingham band, Peace, released their debut album, In Love, they have played shows across the globe and are set to headline this year’s Dot To Dot Festival. Drummer Dominic Boyce spoke to Ben Jolley about making the second album and nights out in Nottingham.

“WE played Dot To Dot in 2011 and it was so much fun. Nottingham has always been amazing to us. We've had some great shows and we've got lots of friends there so we're really excited,” says Peace drummer Dominic Boyce.

“It'll also be one of the first shows since before Christmas so we can't wait. We're ready to explode. We're ready for a great weekend and I think Dot To Dot will provide.”

It's a significant gig for the Worcester indie quartet, as headliners. They'll be on the main stage at Rock City on Sunday, one of 15 stages hosting dozens of bands and musicians during the all day event.

The last time they played the Talbot Street venue was also a significant occasion.

“That was the first night on that tour and I was pretty nervous but very excited because it was the biggest tour we had ever done. I loved that Rock City show.

“That whole area around there with the venues and clubs is great. We've had many a good night in Rescue Rooms.”

Dominic says that the follow up to last year's debut album, In Love, is near enough finished.

“Sonically there are some similarities to the debut but it certainly drifts around different sounds. I think we're moving on, in a more focused and controlled direction.

“No one could predict exactly how In Love was going to sound, because it was our first album. Whereas, with the second one we're much more educated in the process of recording an album.”

With so much hype surrounding what Peace will do next, it's surprising that they aren't feeling the pressure.

“It was very much us saying we want to do it now,” he says of the quick return to the studio to record the follow-up.

“We're not putting it off, maybe we should be, but it just felt like the right time. It feels like this is what we should be doing.”

A lot of the new songs were recorded in hotel rooms or on the back of tour buses.

“There wasn't really a lot of pre-production to the new album.

“A lot of it was written on the road. Harry would make really rough vocal and acoustic guitar demos then we'd all listen to them and come up with our own ideas of what the songs could potentially sound like.

“The album's probably been written over the last 18 months of touring, although I think we've still got a lot to give from the first album.”

The band's new single, Money, is his favourite from the new record.

He says: “It was the first song we did in the studio and we had a lot of fun recording it. We'd been waiting to get back in the studio for so long.”

“I think rap's too strong a word, but it is slightly more rhythmic,” says Dominic, adding “I think it sounds cool.”

In August, Peace will be playing the main stage at the Reading and Leeds Festival.

“I think it's my favourite festival,” he says.”When we played there last year, they were probably our favourites of the whole summer. You couldn't ask for a better crowd really. We're very flattered and honoured to be asked to play the main stage this time. If people think we can do it then we'll certainly give it a good go.”

“After festival season, we hope to release the new album, probably at the end of summer. I don't know what will happen in autumn; probably much of the same really. We'll play a few shows, go abroad… we've got a lot of years left in us.”

Peace headline the Dot to Dot Festival on Sunday at Rock City from 10pm.

As seen originally in Friday 23 edition of the Notitngham Post and online at: http://www.nottinghampost.com/Dot-Dot-interview-Peace/story-21127798-detail/story.html?hga