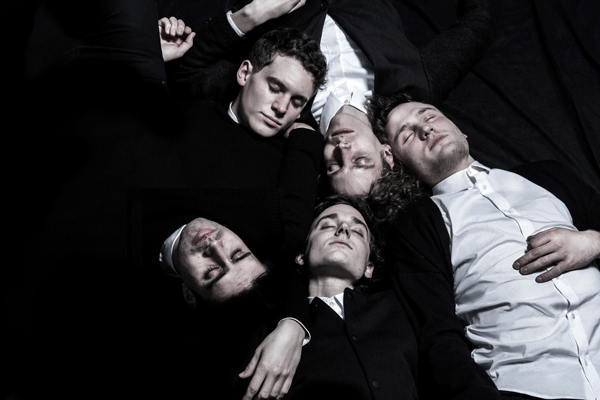 The modern world is crazy right? It’s all Starbucks drive-throughs, touch screen Apples and crazy One Direction stalkers, but one of the better things the modern world has coughed up is Skype. Skype means we can do crazy things like make babies in whole different countries cry with out even being near them. It also means we can interview bands without being in the same city, country or hell even same planet (Bowie)…

This miracle of the modern world is how it became possible that on a windy autumnal afternoon, I was able to interview the wonderfully Swedish, not to mention slightly eccentric Max Bergå; lead singer of Everywhere the newest band to come out of the massively successful Stockholm music scene-

Tommy: We’re here to talk about the new single ‘Soldier’, but I’d like to get a bit of background first…
So you guys are from Stockholm, there’s so many huge headline acts like The Hives, Avicci and The knife who have burst from the scene in the last decade… What’s the pressure like for you to succeed with that competition?

Max: It puts allot of pressure on us to go in the same fold or foot trail I guess, to live up to the Swedish greats, the outstanding tradition of crafting massive pop tunes in now resting on our shoulders!

T: I read recently the band’s name came from a Helen Gurley-Brown quote?

M: Yeah, she was this outspoken female rights campaigner and I read that quote ‘Good girls go to Heaven, bad girls go everywhere’ and realised just when I started out with the band, that all the girls I had ever dealt with had been very bad, so I draw the conclusion that I must be everywhere!

T: SO, leading on from that, you started working the fashion industry before the band, is that a big inspiration when you are creating new tracks?

M: Yeah, I started working as a model, then a model agent; it has kind of forged my way and my perception of aesthetics, that whole ‘fashion industry’ and photographic ideals. It’s greatly influenced the way I see the visual aspect of the music.

T: Yeah, I guess right now in this social media obsessed culture, things like Instagram and Tumblr make the visuals as important as the music?

M: The concept of the image is enormously important, Drawing allot of inspiration from the fashion magazines and the big fashion photographers, as a concept is the right way to go!

(Back to the music)

T: Obviously your last single (huge viral hit ‘Eddie’) got so much success online, how’s that set you up for the new single?

M: It’s created a nice little root, like once you’ve been let into a room, the chances are you’ll be let into that room again…

T: So there’s a ready made fan base almost?

M: Yeah, I mean it’s created a good interest for us to follow up on.

T: So skipping the music for a second and going straight to the video…

(The video features Max, rolling around with lots of women, all naked in a giant swamp… see link bellow)

Who’s idea was that?

M: (after a slightly nervous laugh) the directors! It was all a bit like ‘okay max, time to take your pants off and jump in the pool!

M: What I realise now is it’s a very special concept, that I’m being attacked by these girls! Its kind of about modern day men, how they are exposed to these ideals, with pressure coming from society and women, they have allot to live up to!
The video is kind of an illustration of how men are suffering too.

T: I guess that links back to your fashion background, on how women are made to look a certain way, and how that’s starting to move into male-society a little bit more?

M: precisely, What I’m doing is shedding light, that there is not only pressure on women, but there is also pressure on men to live up to often unreasonable expectations, like you have to have a ripped six pack a tight ass and be the best ever dad!
The women in the video are more of a metaphor of society and how it kills me!

T: So the song in itself, you can see references to The Cure, that 80s and early 90s darker pop music, is that what you were aiming for?

That grunge pop kind of thing?

M: If that’s your conclusion, you’ve drawn the most accurate conclusion!

The guitars are never really tuned, to give them that kind of heaviness.

T: For that kind of ‘grunge’ aesthetic?

M: Precisely!  The thing is the piano kind of comes in and contrasts in a way, when I heard it the first time we were arranging it I was like, this is completely right, I want to go with this!

T: Yeah, it kind of jars, but in the right kind of way!

T: So who are the big influences on the upcoming E.P, who are you listening to?

M: As boring as it sounds, most of the guys are into classic Bono! Classic arena style anthems! For me personally when I wrote this song, I was listing to allot of the Pixies, it might not transcend to what I’m doing, it never seems to!

T: No, I think you can kind of tell, there’s that 90s Indie-rock voice there!

M: It’s kind of weird, whenever people ask me about inspiration it’s always so different from what it actually sounds like.

T:I was listening to Florence (and the machine) recently, and its kind of interesting how you can really hear what her inspirations were, its cool to see that played out in a more subtle way here …

M: Yeah, you can hear she’s been listening to allot of Kate bush! That’s how some people work, there are two types of artist, those exceptional at recreation, who can recreate something iconic, and some people who just can’t, I’m lousy at reinterpretations, its simply impossible!

T: So you are talking these huge headline bands for inspiration, any plans to do the festival circuit next year?

M: We’ll see what lies in the pipeline…

M: Notting Hill Arts club, on November the 18th! You are very welcome to come and see me making a fool out of myself!

M: Yeah it’s nice to play in huge venues, but also the small places too.

T: To bring that big festival vibe to a smaller stage?

M: That’s what I’ve always been about, grand rock gestures on a small stage!

M: He’s never been a hero of mine, I’m almost a carbon copy of  Bono! We draw allot of  live inspiration from Bono, he’s the best live performer of all time, I’m not so much into the music but he’s great. He looks into the camera, and he’s like ‘I’m going to screw all of you!’

T: It’s kind of iconic, are you aiming for that icon status?

T: I’ve noticed on Youtube, there’s a lot of people remixing the songs, is that flattering to see?

M: Its nice to see Indie rock being mixed around, especially with things like new disco, letting these Swedish geniuses redress the tracks. We trust them!

T: So after the E.P when can we expect a full album?

M: We are currently working on one, but there’s no set release date, but there are two singles due out early next year!

T:  So I’m going to end on two classic questions for you…

What’s your hope for Glasto headliners?

T: and finally if you could duet with anyone dead or alive, who would it be?

M: Mozart!  We have almost the same haircut; we connect on a deeper level!  As long as its big and fluffy I’m okay, no perms, we don’t like perms!

…We decided this was a fitting way to finish. I mean, who in the modern world really has a perms? They certainly wouldn’t look good on Skype…

Everywhere’s new single ‘Soldier’ is out on November 11th.