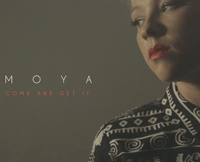 Daniel Hughes was at this year’s V festival and managed to catch up with the lovely Moya after her performance on the Futures Stage. See what she had to say about performing at the festival, as well as how her year has been so far.

Dan: Hi Moya, you’ve just finished playing the futures stage how was it?

Moya: Good, really good, the crowd were amazing actually. It’s always a bit touch and go at that time of the day but there were some devoted fans at the front which made my life a lot easier, and it was a nice stage as well.

Dan: Ah that’s good, so how did it compare with when you played at T in the park?

Moya: Oh so much better. Don’t get me wrong the Scottish are mad and do like a party but for some reason, maybe because of the stage or just the way it was all set up, it just felt a lot more comfortable and the crowd were a lot better. Oh god they’re going to kill me at T in the park aren’t they!

Dan: Haha, I’m sure they won’t mind. So what is your favourite thing about festivals?

Moya: Is it really cliché to say about the drinking? It is isn’t it, but that is quite a big thing when it comes to festivals. But I don’t know I think it’s the laid back feel, at a gig everything is quite formal but at festivals everyone is just kicking back having a good time and so I think it’s the informality that I like about them.

Dan: So have you seen anything particularly strange at any festival that you’ve played at or been to?

Moya: Oh god….. Not really, well Reading and Leeds maybe, doomsday on a Sunday night where they try and blow up everyone’s tents. That’s not always fun.

Dan: Ok. So your new single Come and get it comes out soon, what’s your inspiration behind the record?

Moya: Haha…. Well it’s about an ex. Basically it’s about him not manning up and being a bit of a bastard really, and not realising what he had. When I was saying basically come and get it, I’m here for the taking and him then not doing that.

Dan: Nice. So you’ve recently been touring with Rod Stewart, how has that been?

Moya: Nuts! Arenas, there is nothing that can compare to it, it’s amazing and he is a very lovely man, I’m very lucky to be a part of his tour.

Dan: So who would you say are your musical icons and have inspired you to get into the business?

Moya: I think it’s kind of a lot of the motown and soul sort of stuff. I listen to a lot of Stevie Wonder, Gloria Estefan people like that and they are the ones who inspire me I think.

Dan: That’s brilliant, well thank you for your time today Moya and enjoy the rest of your day.

Check out Moya's new single 'Come and Get It' here: