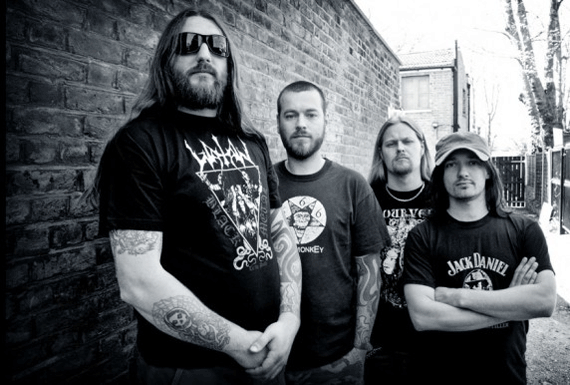 We got to speak to Joe Hoare, guitarist to stoner metallers Orange Goblin, and this is what he had to say:

SFG: Have you been enjoying Bloodstock so far this year?

J: Yeah it’s great, since we’ve came here we’ve literally been doing press for the last few hours, but already it’s a great atmosphere, like always it’s fun, people are here to have a good time, as opposed to the other  bigger festivals which are also fun, but this is a bit more intimate and its nice.

SFG: Are you looking forward to any bands playing or caught any you wanted to see yet?

J: Yeah we saw a bit of Crowbar that is the only band I’ve seen any of y’know for like 20 minutes. Of course they were awesome as always! Later on, we’re clashing with Testament which I would have liked to see, everyone I know has been saying ‘ah I don’t know what to do!’, fair enough if people want to see them I wouldn’t blame them at all. Yeah Machine Head of course I would like to see, I always like to see their set, but apart from that I don’t have enough time to absorb everything so I’m just going to grab whatever bands I can when I get a chance.

SFG: Going on about clashes, last year at Sonisphere (2011) you clashed with the mighty Slipknot and still managed to pull a good crowd, was that a good feeling?

J: Yeah it was a great feeling, it was a fantastic crowd and we are still getting over how many people there were last year! Same thing we thought okay yeah we’re on the same time as Slipknot, we kinda have to expect not to play in front of many people but a couple hundred fans turned up and it fantastic, was a really good feeling. I guess at a festival that big, you kind of really appreciate the fans that do come to see you because they’ve come to see you as Slipknot are a great band, and yeah it’s been a good year for us!

SFG: Hopefully you’ll get that with Testament then! Onto other things, you’ve just had Eulogy Of The Damned out earlier this year, how was that like recording?

J: It was brilliant, it was the 7th album we’ve done, and to be honest it’s been the best one we had received, it’s just gone down so well. The way we recorded it we used a guy called Jamie, who’s just a young producer, done some good stuff but nothing big. We used him because we recorded a Sabbath song for a CD mount on a magazine; we liked what he did then so we just said ‘look, do you want to do the album for us?’, and he did, he made a great job of it. The response we had like I’ve said has been phenomenal. We didn’t expect to have such a good response.  17 years down the line you kind of hit a steady flow and all of a sudden to be elevated a little bit is kind of unexpected! It’s been a great year so far.

SFG: I’ve heard you’re going to be re-releasing some of your earlier albums on vinyl again, what was the decision behind that?

J: Yeah we’ve never had the first couple of albums ever released on vinyl. It’s always something the band and Lee, and Will at Rise Above have always had in the pipeline it just never happened for whatever reason. We got speaking to Lee, we’re on very good terms with Rise Above so the time came where he just went ‘okay I wanna do this now’,  yeah its looking good, there’s gonna be a few different coloured vinyls coming out. Not sure when they’re being released yet, its great to finally have them out.

SFG: So what else is in the future for you?

J: The future, next year it’s looking pretty busy. We’re hoping, not definite yet but we want to do a world tour, but again that’s in the pipeline, not 100% sure about that yet.

J: It was pretty much what we just did in the studio at the time. If you look back at the album like The Big Black; that was pretty heavy, pretty bass heavy. I think every album subconsciously has got a different kind of sound and theme running through it. This one has is pretty much a bit of everything, it wasn’t intentional we just went in there with a lot of riffs. Whether it sounded like a Southern Rock song or a whether it sounded likea  Sleep song, whatever band we decided to rip off at the time! (laughs). The reason we started a band was to do what we love doing, so this album, if anything is more polished than others. As for the heaviness, we wanted it to be heavy but clear. We weren’t bothered about it being extra extra heavy and sludgey or whatever. We wanted people to hear what we were doing, and make it as clear and pristine as possible but at the same time but be as heavy as we could make it! Again, Jamie did a great job producing it; we spent a bit of time on the sounds. Yeah but we never intentionally set out to do anything any different to any other album, it’s just what ever come out at the time, and this is what came out this time!

SJM: well I think that’s all for today, thanks for your time!