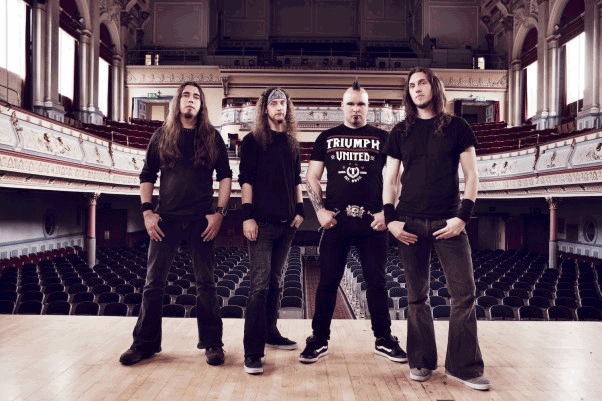 At Bloodstock we at Summer Festival Guide got to talk to Ol Drake from Evile, getting to talk about all manner of music related subjects and this is what he had to say:

SFG: Have you been enjoying Bloodstock so far this weekend?

O: Very much, it’s always one of the best festivals. It’s just pure metal and just fun as hell.

SFG: Are there any stand out bands you’ve seen so far, anyone you’re particularly looking forward to?

O: Testament yesterday were amazing, because it’s Testament, Machine Head were really good as well. Today we’re doing a lot of press so I don’t think we’ll chance to get to see many bands.

SFG: Fair enough. Are you looking forward to your set later today? Being bumped to main stage will make it different to what you originally planned?

O: It’s going to be amazing, we were originally on the Sophie Stage, but we got bumped up, and it’s an honour to play Bloodstock as it is, but being on the slot that we are is amazing. It’s going to be really good!

SFG: Are you feeling any different from the last time you played in 2010 or more confident or anything?

O: I think slightly more confident, because we’ve done a lot more festivals now. We’ve got into the groove of how different a festival is to playing a club show. It’s really different in terms of playing, so it should be a lot better this time.

SFG: Later on this year, you’re touring with the heavy metal fun house of Wolf, are you looking forward to that one?

O: Definitely! They’re a great band and great guys.  It’s good to have a band that’s not typically thrash, y’know as a bill of Thrash can get a bit jarring on the ears. It’s really good to have a classic metal band with Thrash as well, so it’ll be really fun.

SFG: I’ve read that you’ve got a unsigned competition going on for your Huddersfield home town show. What ended up being the decision to do that?

O: When we were trying to think who we wanted to support, it just seems unfair to pick one band when so many bands emailing saying ‘please let us open’, so we thought why not let anyone open in a sense, so we opened it up as a competition, simple as that really!

SFG: Good response to it so far?

SFG: So are you picking all yourselves as well then?

O: Say if there’s 100 bands that enter, we all will pick like 25 then we’ll whittle it down to 10, and then keep whittling it down till we get 4 and then vote on 1 probably.

SFG: We’ve heard a sneaky rumour that you’ve got a new album in the works, is there any details on that?

O: I basically started writing as soon as we finished Five Serpents Teeth,   and I’d say I’ve got about 12/13 songs like started on the skeleton structure. It’s sounding angry, aggressive, some really heavy stuff. Maybe another nice sounding song with clean guitars instead of noisy ones, but it’s sounding interesting anyway.

SFG: Backtracking to Five Serpents Teeth, it seemed to be quite well received; did you find the response good from it?

SFG: Anything else planned for the future of Evile or is it just open after the tour?

O: It’s basically write, record the album, tour as much as possible, and then just do the same thing again. Do the next album, it’s what we like doing so that’s what we’ll do!

SFG: Sounds like a good plan! I think that’s all the time we have for today, thanks for your time and it’s been lovely to meet you.