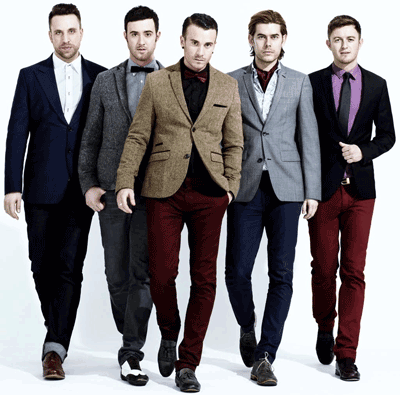 On Friday August the 10th, BT London Live Olympics Festival in Hyde Park was in full swing; with glorious sunshine, phenomenal live music and – of course – three gold medals for team GB, to ensure smiles were on every face. The Overtones performed to several thousand Olympic-enthusiasts. Combining their unique sound with boundless energy, the lads soon had the entire audience on their feet and every Great Britain flag waving high in the air.

Shortly after their set, they joined me backstage for a quick chat. Band member Mike was chomping on a huge burger, so I opened the interview by addressing him directly.

SFG: So, Mike, with your mouth full of food. Whereabouts in the UK are you from?!

SFG: That’s near me, I’m from Plymouth.

Mike: Our tour ends in Plymouth.

SFG: I will definitely come along to watch! So whereabouts are you all from? You seem to have different accents.

Mike: We’re from all over. I’m from Bristol.

Darren: And I’m Mr Essex. I actually was Mr Essex one year.

SFG: So how did you all meet up then? How did you get together?

Timmy: Well, the four of us had been singing together for six years without Lachie. We met while singing at open mic nights. I met Lachie several years ago, handing out leaflets for a famous department store. But I won’t mention the name, because he used to take lots of lunch breaks and put the leaflets in the bin!

Timmy: I then heard his amazing bass voice and said ‘you have got to be in our band!’

SFG: Amazing! So how did you get involved in this Olympic festival?

Mike: This festival has just been amazing to us. We’re really lucky guys, they invited us along and we’ve just had an amazing time.

Timmy: Unreal crowd; everyone is in such good spirits. Not only is the weather great, but everyone is really getting into the whole Olympic atmousphere. Team GB have done so well.

Mike: It feels so patriotic at the moment it’s ridiculous. We’ve actually just come back from LA where we recorded or first video for the next album ‘Higher’, which is out on October 1st. Although we’ve been away, we’ve seen little bits of the coverage on US TV and it’s not the same. But coming back here, you just get right back into the spirit of things. I love this country!

Timmy: But you also learn to appreciate sports that you would never normally get to see. I’ve never enjoyed show-jumping so much in my life!

Mark: Can I just say, I’m really looking forward to Sunday because we’re all going to have a few drinks and watch the closing ceremony.

SFG: So you’ve all been following the Olympics from overseas?

Mark: No, I’m just looking forward to the party at the end of it! Of course, I’m joking, we’ve all been following it.

Darren: I enjoy the diving most. That really impresses me. Team GB did really well.

SFG: So who does the choreography for your set? Because when I was watching, I couldn’t help but love your moves!

Timmy: Well, she gives us a hand. We’ve done most of it by ourselves in the past year, but now we’ve been getting people on board. It feels weirdly like we’re loosening the reigns with the shows. But we’re still involved in everything we do regarding style and choreography, so we always add our little Overtones moment. A bit of a click. A little toe-tap. It’s got to be done!

SFG: Is there a signature move that you do in every show?

Timmy: I have a little move. It’s called the Timmy Shimmy, so I do do that. And if there is Beyonce on, I will grind a little bit!

SFG: Steady on! So, did you come to London just for this gig?

Lachie: No, we live here.

Timmy: It’s where we’re based. We were lucky enough to perform at the Queen’s jubilee this year too. Gary Barlow asked us to be the warm-up act which was amazing. It was such a big thing to be a part of! We’ve been having a great year so far. Of course, we’re all looking forward to the album coming out as well and people hearing the new stuff we’ve been working on. It’s such an exciting time for us. We’ve worked our butts off for the last 8 months; living in the studio. It’ll be great for people to hear it, so check it out! ‘Higher’ is out on October 1st, baby!

SFG: And finally, who do you think would win in a fight out of all of you combined, and one female welterweight Olympic boxer?

Timmy: I have to mention Katie Taylor because she’s flying the flag for female boxing at the moment.

Timmy: Have you seen her fight?!

Lachie: Although we could stop her with a wall of harmonics. (Sings) GET BAAAACCCK!

SFG: On that wonderful note, it’s been an absolute pleasure talking to you! Best of luck with the new album, and thank you for coming to speak to me today.