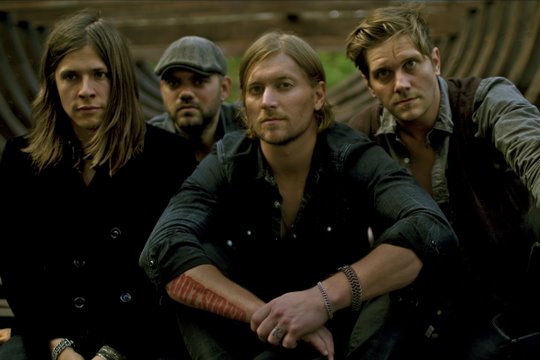 SFG: So I’m here with NeedToBreathe from the USA and they just played the Pepsi Max Stage, well a few minutes ago anyway, and we’re at Hard Rock Calling 2012, so how you doing guys? Had a nice day so far?

NTB: Oh yeah, love it, love it. It’s dreary but we’re excited about all the rock n roll coming up.

SFG: It was a pretty big crowd in there, everybody dancing, loads of girls in daisy dukes, quite appropriate?

NTB: It was, it was great, yeah it’s our typical audience, haha

SFG: So, British Summer, as you can see, pretty rubbish. Coming from South Carolina, it must be a bit of a shock?

NTB: It’s a nice change of pace I guess, it’s a nice way to put it… hahaha

SFG: That was a *really* nice way to put it, yeah, thank you!

SFG: It’s got to be the worst though, surely

NTB: We’ve heard from everybody here that they’re just disappointed, but the sun will come out at some point!

SFG: How do you think your Southern Rock style goes down over here? I mean obviously South Carolina is known for that kind of thing, but Britain hasn’t really got that kind of groove…

SFG: Do you have a good British fan base?

NTB: We just started, this is our second tour over in the UK, and its been amazing. It’s crazy to see people who have the record and it’s not even in stores you know?

SFG: I did just hear that your London show on Monday has rocketed in ticket-sales, and obviously you seem to be pretty popular in the TV and Film world, I’ve been doing a bit of research there and just for the record they’ve had songs on; PS. I Love You, The Hills, Prison Break, Employee of the Month and Cougar Town, just to name a few – that is a serious list guys!

NTB: It is, it is. It’s always a shock and surprise you know, when it comes on, cause we don’t know every time it’s going to come on and we start seeing the tweets and it is weird. When you hear it sometimes it takes a few, we’re kinda caught off guard a little bit, and we don’t even notice it’s us right away, cause we don’t sit around listening to the record – we play the song and it’s always a bit different to the record

SFG: Do you not just go “hey, who’s this, I really like that, that is such a good song”

NTB: Hahaha yeah “oh yeah there is something about this that is really getting me going” yeah that’s the way it is haha

SFG: Well following on from that, my question is, if you could pick any TV show or movie, past, present, future, that you could record the soundtrack for, what would it be?

(Bo, laughing) Yeah wow, haha, I think The Gladiator movie, I like the arrangement of that, yeah I like the big sounds.

(Joe) For me it would probably be Lost, because all you would really need to do it so be able to make that ‘woaawwwww’ sound.

SFG: So, you’re currently touring Europe, but what other festivals have you done this summer, and how do they compare to Hard Rock Calling?

NTB: Um, we just did Bonnaroo, about a month ago, yeah and it was really like… stinky hot. It might be kinda cold here, but at least the smell is kept in by the cool air, in Bonnaroo it is just released among the crowd, it reeked of hot weather.

SFG: How do the festivals compare to playing your standalone shows?

NTB: Yeah it’s always fun when it’s our crowd but it’s nice playing to new people and showing what we do, so we like the festivals yeah.

NeedToBreathe’s upcoming single ‘Keep Your Eyes Open’ is out on September 3rd with full album ‘The Reckoning’ being released the following week in the UK.