Home > Interviews > Bruce Springsteen’s Wig, Haggis and the Fight against Cynicism, just another afternoon with Hue and Cry 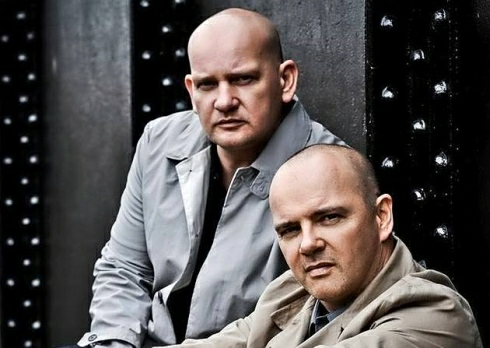 We caught up with the Scottish duo Pat and Gregory Kane from Hue and Cry at Isle of Wight before their set on the main stage on Saturday, to talk about their latest musical ventures and sticking it out in the music industry for the long haul.  It turned into a conversation about wigs and cynicism…standard.

Gregory: We did a series of stripped back tours just Pat and I on our own, and we played beautiful theatres all over England, from way down south, Bournemouth to all the way up north in Newcastle.  And we've just reached out to all the people that liked Hue and Cry in England for the past two months, and there was a great response.

How have you found playing such a stripped back tour, compared to playing with a full band?

Pat:  When you're playing acoustically, the stakes are higher.  When you're facing an audience, of  three hundred or four hundred people every note counts and every moment counts, its quite exhausting, draining actually because you have to commit to it.  I’m not saying you can be indifferent with a band but at least there’s seven other people around you.  You play your part in a collective production as it were, not everything relies on you.  Where as with me and Gregory its just the melody and the chords and the words and the keys and the guitar, but that can be magical.

SFG: As a band an as a song writing collaborative you've have been able to carve out a career over a long period of time.  In a day of flash-in-the-pan artists and bands that break down after one or two albums how have you managed to continue working together?

P:  Well brothers don’t beat themselves to a bloody pulp…usually.  They usually figure out ways to sustain each other so, we have a deep relationship and a deep musical relationship.  We keep coming back to drinking from that well, cause its inexhaustible.

G:  Its a vocation for me, I love what I do, I've made music my whole life since I learned how to play the piano at 9 years old, 34 years later I’m still here playing the piano.  I did a paper round to help pay for my first saxophone.

SFG: Do you think your songwriting process has changed significantly or do you still work in the same way?

P:  We're quite naïve songwriters; we kind of write from the heart and don't really copy any body and don’t write for a market.  We write for ourselves.  A lot of the songwriters I know who are much more successful than us are a bit more cynical than that.  We've never really done that, we just get together and we sit ourselves in a room around a piano or a guitar and we see what happens.  We don’t plan it out.  And in the production side of it, then we'll decide what kind of record we want it to be.

SFG: How have you managed not to become cynical?

P:  Because we couldn’t stand up and sing it with a straight face…We feel we've spent our whole careers trying not to be cynical in what we do.  We lasted five years in major-record-company-land; touring with Madonna and playing with James Brown, and that was enough.  The last album we did, the third album, was the most eclectic thing we'd done, a seven piece jazz outfit from Edinburgh and our poor London record company were scratching their heads thinking 'Oh no what are they doing?'  I think that was the final straw for them, we wouldn’t go and write with who ever had the last hit.  Seymour Stein one of the most famous A&R men from the eighties; he discovered Bruce Springsteen, flew over to Glasgow to see us and we met with him and saw the potential in us.  He saw it in us, but we didn’t see what he saw, so we didn’t go with him.

G:  I told him, I couldn't work with someone who had a leather piano key tie, and a Les Paul badge, so that was it.  I wonder if he'll be here with Springsteen tomorrow we could say Hi to him.  We also have to ask him if he's got a wig on.

G:  Bruce, its definitely a wig.

SFG:  If we could make it really windy…?

P: Oh no, its a rock wig, its beautiful.

G: I was thinking a fishing line…

SFG:  So anyway…What's the best festival that you guys have ever played?

P:  We played the Cork Jazz Festival many moons ago and it was the wildest jazz audience.  Appreciative wild Irish passionate audience,its the best festival I’ve ever done.

G: They were soaked in there own urine most of the time.

P: Oh yeh, not pretty, but they were an appreciative jazz audience.

SFG: For new listeners, How would you describe your music?

G: Erm, basically, if you scrunch together the lyrical ambition of Elvis Costello, with the musical eclecticism of Prince and Steely Dan, and then put it in a haggis wrapper…

P: and then shit it out.

G:  Shit it out…but draw nutrients from it in the process.

P:  That would be Hue and Cry.