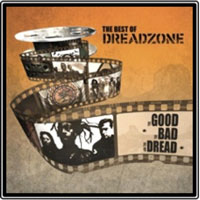 FacebookTweet
You’ll be playing Glade and Glastonbury this year; will you be sticking round to watch any other artists? If so who are you most looking forward to?

Trentmoller is on the Friday at Glade so will definitely be catching him. He is one of my favourite artists, in fact one of the most innovative in the whole electronic music scene. It is possible that we willonly be there for the one day though so will only be checking people on that day.
Your live performances are known to be very different from your studio work, what can fans expect from the live shows coming up this summer?
A lot of energy and a bunch of tunes from our best of Dreadzone release ‘The Good, The Bad and The Dread’ plus some from our last album ‘Eye on the Horizon’. As myself and Leo have been off doing Big Audio Dynamite shows we are bringing back a high level of playing power into our set, so it should be well bouncing.
How do you think your 2010 album ‘Eye On the Horizon’ album translates to a live setting?
We play quite a lot from the new album and it translates really well. They are quite song orientated so maybe more linear stuff will work better at Glade. Different tunes work for different shows but the new stuff stands up well next to the more well known tunes.
You guys have seen some big changes in the music industry since the days of playing with Big Audio Dynamite, how do you think the industry has changed since then?
The landscape has changed so much that its a challenge to keep fresh enough to stay afloat.  There is lot less long term investment so its harder to build a band, the benefits are it makes more artists be more independent and understand the mechanics of the industry.
Has this affected the live shows that you do?
It has meant that a lot more work comes from the touring and less from the records. We always seem to be on the road, especially at festivals
You released a greatest hits album recently, are there plans to record some fresh material?
I am currently working up a lot of new ideas for a Dreadzone library album and that will form the basis of our next record. We are always writing and formulating new ideas. The next Dreadzone album will be more live, dynamic and be made quicker than the last. And a bit more rock and roll
With Big Audio Dynamite on tour again, you’re only playing a few gigs this summer, does that mean Dreadzone is on hold for now, or do you have plans for the band once the B.A.D tour is over?
We are trying hard to keep the two in tandem, some of the BAD schedule affects the Dreadzone schedule for a few months but we have a full UK tour planned for Dreadzone for late summer/autumn plus a bunch of festivals. Dreadzone are never on hold.
What artists are you listening to at the moment? What are the most played tracks on your IPod?
Trentmoller, Foo Fighters, Dubstep, film soundtracks, Led Zeppelin, Jamie Woon, James Blake, 140 breaks, Queens of the Stone Age
You’ve seen the dub, dubstep and electronica scene change and grow over the past years what do you think will be the next thing to shape the UK music scene?
It’s impossible to know where the innovation will come from next but am pleased to see and hear stuff that comes from dub foundations to make an impact on the scene so much. The space, production and ideas are so forward thinking.
Interview by Tina Boonstra
Dreadzone’s latest album, The Good, The Bad and The Dread, is out now, click here to buy it.
For a list of upcoming shows visit: www.myspace.com/gregdread
FacebookTweet