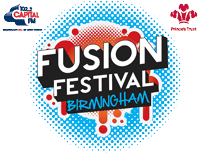 Sigma, Blonde, Anne-Marie and Imani join the Saturday line up and DJ Fresh, Becky Hill, The Tide and Club Drive join Day Two on the Sunday.  They join Jason Derulo who headlines Day One, along with Tinie Tempah, Labrinth, Craig David, Sigala, Fleur East and Krept & Konan. Olly Murs will bring the two day event to a close alongside Busted, The Vamps, Nathan Sykes, Lawson, Ella Henderson and Jamie Lawson.

Also for the first time ever at Fusion Festival, Kopparberg is set to bring a taste of scandi-cool with the arrival of the popular Kopparberg Urban Forest! Two of Liverpool’s most popular breaking artists, Louis Berry and Mic Lowry will be taking to the stage, underneath the magical canopy of the forest. Kopparberg will be supporting the very best in creative and imaginative live music, by hosting a series of pioneering artists and DJs on its iconic Urban Forest stage.

The stage will be placed in a scenic clearing, surrounded by the intriguing beauty of the Swedish pine forest and the charm of Kopparberg town. Carved into the Kopparberg Urban Forest will be two woodland bars serving up all kinds of refreshment from the independent Kopparberg brewery in Sweden. Alongside its selection of delicious fruit ciders, Kopparberg will also be serving the brand new Kopparberg Fruit Lager.

Jessie J, Ne-Yo, JLS, The Wanted, McFly, The Saturdays and James Arthur are among the first names to be confirmed for this summer’s brand new Fusion Festival, in support of The Prince’s Trust and in association with Capital FM.

Joining them are Union J, Wiley, Amelia Lily, Wretch 32, Conor Maynard with many more to be announced. Birmingham’s iconic Cofton Park will play host to the ultimate summer pop party with 60,000 people and some of the biggest acts from both sides of the pond coming together for a huge weekend of pop at its very best.
Chart topper Jessie J will headline Saturday night’s poptastic proceedings alongside platinum-selling boy band JLS and “It’s All About You” crooners McFly.  British rapper Wiley, Union J and songstress Amelia Lily will also be taking to the stage as part of an incredible mix of artists to play the festival.
Sunday will see American R&B god Ne-Yo bring the noise to Cofton Park, where he’ll be joined by chart heartthrobs The Wanted and uber glam The Saturdays, fresh from gaining their first UK Number One with “What About Us”.  Wretch 32, Conor Maynard and this year’s X Factor winner James Arthur are also on the bill, with many more acts to be announced across the weekend.
Expect spectacular live performances, massive chart smash hits plus all the fun of the festival fair with a full fairground and many other interactive events.
Fusion Festival is proud to support The Prince’s Trust, with £5 from each ticket sale donated to the charity to help change young lives across the UK. The Prince’s Trust is a youth charity that helps vulnerable young people to turn their lives around.
The current line-up for the Fusion Festival was announced on the Capital Breakfast Show with Dan and Katy this morning at 8.15am. More acts will be announced in the coming weeks.
Programme Controller at Capital FM, Paul Gerrard, said "This is going to be the biggest event Birmingham has seen in years.  The whole team here at Capital can't wait to see some of the world's biggest stars rock up to Brum, it's going to be an incredible summer and Capital will be right there for every moment."
Festival spokesman, Mike Owen of Go Big said “We felt the time was right for a brand new music festival for the UK’s 2nd city and we are so excited to be working with such a fantastic organisation as The Prince’s Trust and with Birmingham’s Number One hit music station, Capital FM.  We’ve got a brilliant line-up this year and this is only the beginning for Fusion Festival.”
Paul Brown, Director of youth charity The Prince’s Trust said: “We’re delighted that this stellar line-up of acts will be helping to support the work of The Prince’s Trust. Every year we work with thousands of disadvantaged young people to get their lives on track. Thanks to Fusion Festival, we will be able to ensure that more young people look forward to a brighter future.”