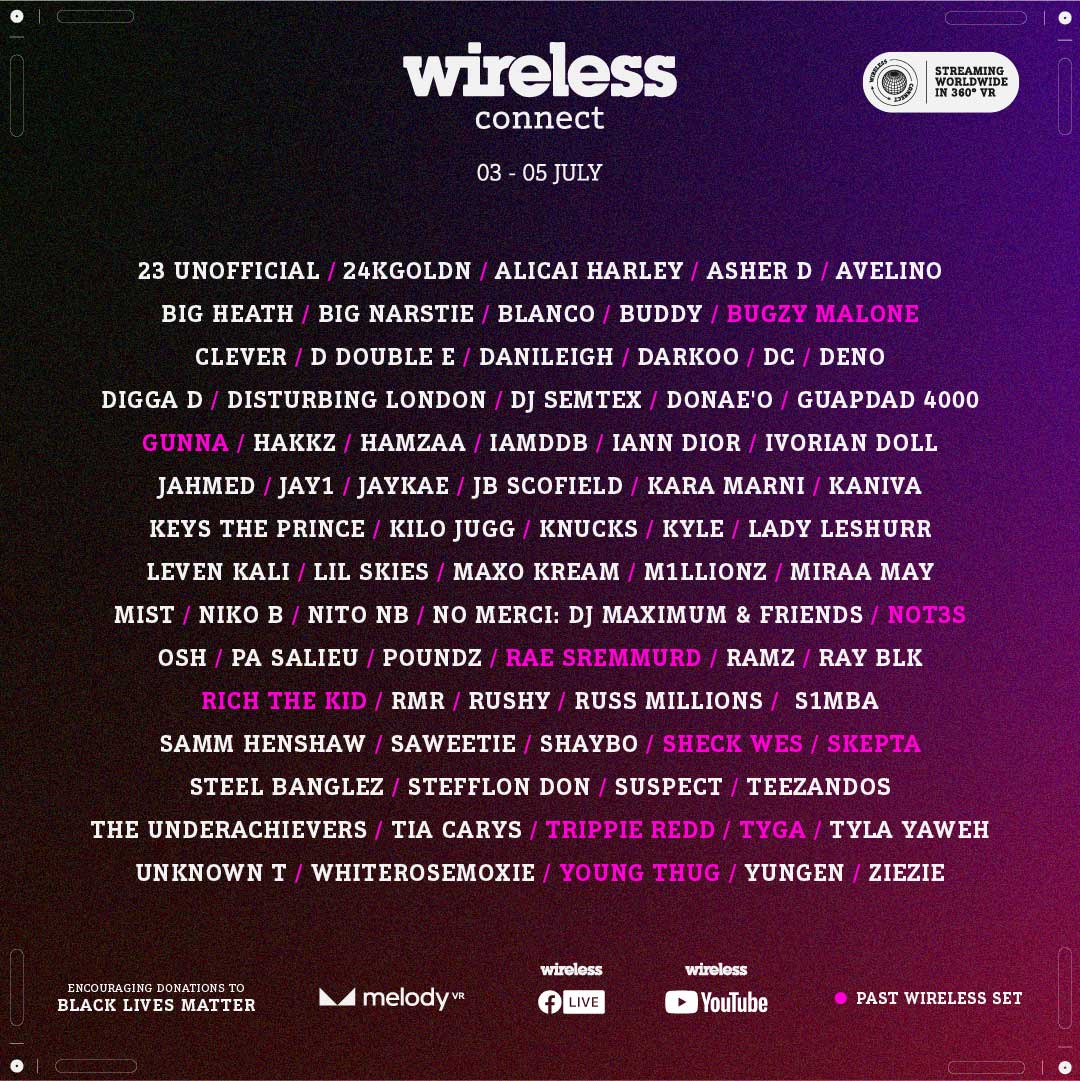 Wireless Festival and MelodyVR are excited to announce the 2020 line up for Wireless Connect, a three-day virtual festival this 3rd-5th July.

Exclusive performances by Stefflon Don, Mist, Steel Banglez, JAY1 and many more will be broadcast in a world first, with incredible additional Wireless 2019 shows from Skepta, Young Thug, Rae Sremmurd and more.

Wireless Connect will be available in 360​° immersive virtual ​reality on smartphones and VR headsets via the MelodyVR app. It will also stream on the Wireless Facebook Live and Wireless YouTube channels.
Wireless Connect brings an entire weekend’s worth of new performances, unseen footage, previous highlights and so much more.

Wireless Connect is totally free to experience, with viewers encouraged to make a donation to Black Lives Matter via Crowdfunder which goes live at 5pm today (Monday 29th June).

In what is its fifteenth year, Wireless has cemented itself as the home of rap, grime, hip hop and R&B – and Wireless Connect will keep the Wireless flag flying. Though proudly London, the festival is synonymous with talent from both sides of the Atlantic, and Wireless Connect’s massive line up is no exception.

Dedicated to championing the burgeoning homegrown scene, Wireless Connect will showcase the hottest talent from across the UK.  From London comes Yungen, Unknown T, Big Narstie, Deno and more.

Wireless fans will also not want to miss the incredible No Merci Presents DJ Maximum & Friends set.
Meanwhile, taking to the virtual stage in LA and representing the US is Saweetie, iann dior, 24kGoldn and more.

Fans can also relive some of Wireless Festival’s most iconic moments including Tyga, Gunna, Sheck Wes and Rich the Kid, all filmed in 360​° virtual ​reality at Wireless 2019. The full schedule – including more artists – will be announced very soon…

With this huge line up coming to you all in one weekend, Wireless Connect is the biggest virtual festival of the summer. Experience the hype and get involved by listening to Capital XTRA all weekend as the UK’s biggest hip hop and RnB station brings listeners exclusive artist interviews and provides the soundtrack to setting up your own VIP area at home, styling the hottest looks and experiencing Wireless like never before.
Wireless Festival would like to remind everyone to stay safe, stay alert and control the virus – practice safe social distancing and follow Government safety guidelines.