Sundown Festival is storming into 2020, announcing its first names for what promises to be the festival’s biggest year yet. Heading back to Norfolk Showground in Norwich across three days this September and following a mammoth 2019, this year’s event looks set to close the summer in style, with camping, weekend and day tickets on sale this Friday.

Known as one of the world’s biggest party starters, the unstoppable Sean Paul is one of two headliners to be announced for Sundown 2020. Arguably the most iconic dancehall artist of all time, the crossover superstar will be treating Norwich to an unforgettable headline set, with the arena set to shake to the likes of ‘Get Busy’, ‘Temperature’, ‘Breathe’ and legendary features including ‘Rockabye’, ‘Cheap Thrills’, ‘Boasty’ and many more. Needless to say, this is going to be one of the biggest moments of the summer.

One of the leading voices in confessional hip hop, award-winning UK rapper-turned-superstar Loyle Carner is guaranteed to bring an electrifying headline set to Sundown Festival. With expert craftsmanship and remarkable lyrical resonance, not to mention hits for days across his two studio albums, Carner has become one of the hottest festival bookings of the past few years, with his headline performance looking set to be nothing short of spectacular.

Bringing her smooth reinvention of turn-of-the-century Soul, R&B and British pop music, Sundown Festival is delighted to welcome Raye to the Main Stage in 2020. Forging her path in the UK pop scene, the soon-to-be superstar will treat fans to hits including ‘You Don’t Know Me’, ‘Decline’ and countless others. Also joining the Main Stage line up will be superstar in waiting Becky Hill, whose recent smash ‘Wish You Well’ has stormed into the charts, ready to go off when Sundown comes around this September.

Joining these pop sensations at Sundown Festival will be Fredo and Bugzy Malone who took 2019 by storm with an expert mix of vital and refreshing cuts, with the latter setting pulses racing after his recent collaboration with Aitch, while Fredo and Dave’s ‘Funky Friday’ defined summer 2019. Famed for master lyricism, their infectious jams will be perfect at this summer’s closing extravaganza. Meanwhile, Jay1 and Jaykae will be bringing Midlands-infused grime to the masses, and the main stage will be hosted by KISS all weekend.

BBC Sound Of winner Ray BLK will also appear on Sundown’s main stage, and dance legend Example will return to Sundown with unforgettable classics ‘Changed The Way You Kissed Me’ ‘Kickstarts’ and more, a firm favourite of the festival. The Manor and Wilkinson will also bless the main stage with their presence, with more names to be announced.

In addition to a huge Main Stage lineup, Sundown Festival will continue to provide a haven of genre-defying performances from the very best in drum and bass, house and techno.

Building on previous collaborations at the festival, renowned bass leaders UKF will see the iconic Shy Fx, party starters My Nu Leng, dubstep legend Flux Pavillion, Notion, Bou
and Harriet Jaxxon take to the stage for what promises to be a legendary takeover.

Solardo will be bringing Higher to Sundown for the first time in 2020, with a series of even more infectious sets. Joined by rising stars including Eli Brown, Franky Wah, Latmun
and SOSA, it looks set to be truly unforgettable.

Back for a fourth year due to unparalleled popular demand and fresh after their stunning new look in 2019, the Mystree stage welcomes Weiss, LeftWing: Kody, Majestic, Nathan Dawe, Martin Ikin, Artful Dodger, producer extraordinaire Conducta, Sammy Verji,  Illyus & Barrientos, George Mensah and Harry Pearce to the stage this summer, which will no doubt be huge. 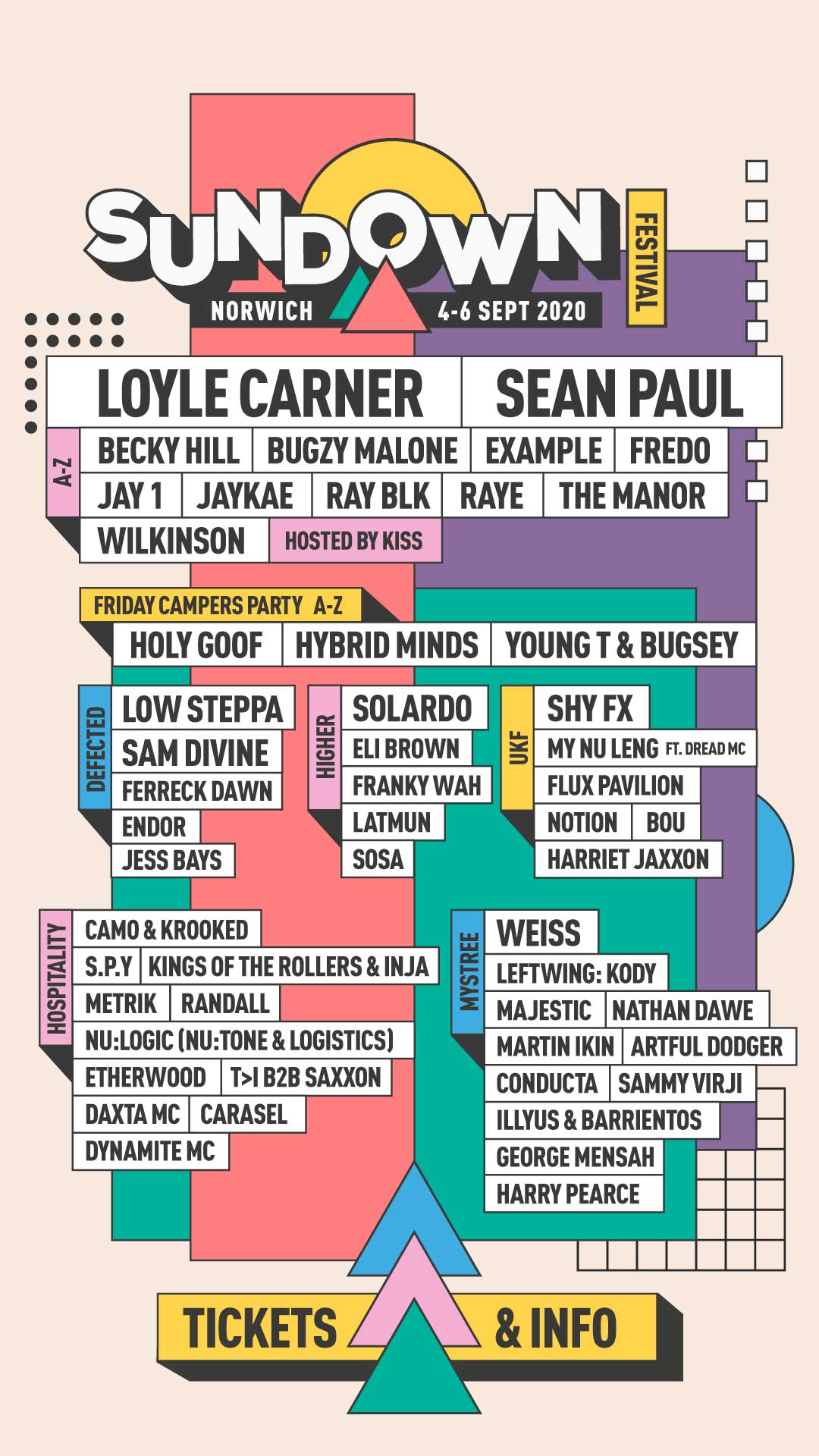