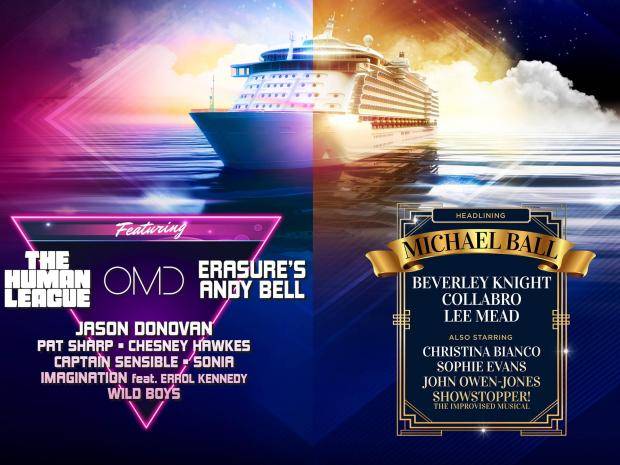 The fabulous and flamboyant pop music of the 1980s and headline performances from stars of the West End and Broadway will be celebrated with two new cruises in 2018.

The new entertainment concept of Floating Festivals is the brainchild of Jonathan Blackburn, supported by a unique partnership with Royal Caribbean and leading live music promoters Cuffe and Taylor to launch two brand new cruises aboard the Navigator of the Seas.

Packages are available now from www.FloatingFestivals.co.uk

Throwback is a party-fuelled three-night roundtrip cruise Southampton/Southampton including a full day stop in Bruges, celebrating all things 80s and will feature a line-up of chart-topping legends from the decade including headliners The Human League, OMD and Erasure’s Andy Bell, along with Jason Donovan, Sonia and Imagination featuring Errol Kennedy, while Captain Sensible will be helping steer the ship back to the 80s.

Stages is a luxurious four-night roundtrip cruise Southampton/Southampton, including a full day stop in Amsterdam. Stages will feature an incredible array of West End and Broadway stars including the nation’s favourite, two time Olivier Award winning, musical theatre star Michael Ball, the world’s most successful musical theatre group Collabro, and the divine Beverley Knight star of The Bodyguard, and Cats.

Thrill to the voices of Lee Mead (Joseph and the Amazing Technicolor Dreamcoat, Wicked), John Owen-Jones (Les Miserables, Phantom of the Opera) and Sophie Evans (The Wizard of Oz, Wicked).

Be amazed by the vocal dexterity of two-time Drama Desk Award Nominated actress and diva impressionist Christina Bianco, and delight in a truly unique performance from the Olivier Award-winning West End production, Showstopper! The Improvised Musical.

Stages will also feature internationally acclaimed choreographer and TV personality Arlene Phillips who will present her stage show Arlene – The Glitz, The Glamour and TheGossip. There will also be an In Conversation with… featuring legendary lyricist Don Black, while award winning West End musical star Marti Webb will join Don to perform some of his biggest hits.

Unlike other chartered cruises, Floating Festivals will not just replace the usual cruise ship entertainment programme, they will transform the ship into a full Festival at Sea.

As well as a packed programme of live entertainment and shows, passengers on both cruises will be invited to take part in a myriad of experiences with abundant opportunities to meet both stars of the stage and pop charts.

“Both cruises offer something completely different and whether you are a fan of musical theatre or you fancy throwing yourself back to the heady days of 80s pop, we are confident both will be very popular.

“These are not just cruises with a theme, these are festivals at sea. The moment the passenger enters the cruise terminal at Southampton they will start to revel in an experience of which they will be a vital part for the duration of the cruise.

“We don’t want to give too many secrets away but I think it’s fair to say the guests are going to have a few surprises along the way.

“We want our passengers to experience both Throwback and Stages in the most magnificent way. We have a fantastic array of stars and performers for both cruises as well as many special features which will really make both these cruises a truly unforgettable experience.”

As well as being part of the UK’s first ever Floating Festivals passengers will be able to enjoy all the amazing features of the Navigator of the Seas including a 9-hole miniature golf course and separate Golf Simulator, the unique FlowRider surf simulator, the signature Royal Caribbean Rock Wall, ground-breaking virtual balcony cabins, the Vegas style Casino Royale, luxurious Vitality Spa & Fitness Centre, three pools, six whirlpools, Video Arcade and a selection of luxury Boutique Shopping experiences.

Jonathan added: “The Navigator of the Seas is a beautiful ship and while we look forward to seeing passengers having an absolute ball with all the entertainment and shows, they will also be able to sit back, relax and enjoy all the fantastic attractions included on this wonderful ship.”

All Floating Festivals packages also include complimentary à la carte restaurant and buffet dining for breakfast, lunch and dinner every day. Speciality restaurants are also available for an additional charge.

The Throwback cruise will depart Southampton for three nights from 12 October 2018 and includes a full day in Bruges (from Zeebrugge).

The Stages cruise will depart Southampton for four nights from 15 October 2018 and includes a full day in Amsterdam.

For more details go to www.FloatingFestivals.co.uk