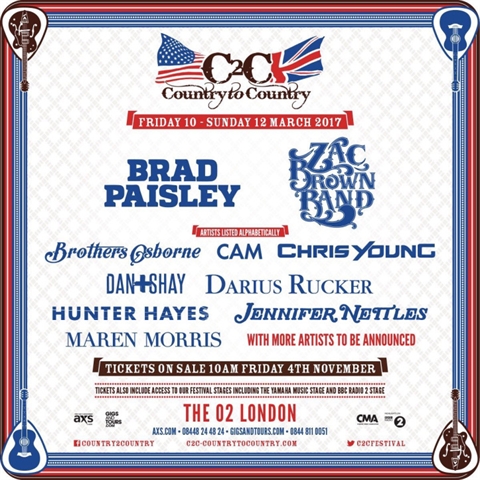 Back for its fifth year Country To Country is delighted to announce the incredible line-up for 2017!

From Friday 10th to Sunday 12th March we will see the return of two of America’s biggest stars, Brad Paisley and Zac Brown Band to the festival alongside stellar multi-platinum and acclaimed artists Chris Young, Darius Rucker, Jennifer Nettles, Hunter Hayes, Maren Morris and Cam plus duos Dan + Shay and Brothers Osborne. Further artists and day splits will be announced in due course.

C2C is UK and Ireland’s largest country music festival bringing three full days of the best in country music and programming that fans have come to love from the world’s best country stars as well as emerging talent from Nashville, UK and Europe.

The legendary BBC Radio 2 broadcaster Bob Harris says, “It’s amazing to think that C2C is five years old already and also how quickly it has grown. I am personally thrilled to be at the centre of it all and can’t wait for next March to welcome back old friends from Nashville and to introduce some new ones.”

Milly Olykan C2C Festival Director for The O2 said: We are thrilled to be going into our fifth year of Country to Country – it’s been incredible to have established an event that is so hugely anticipated by country fans and artists alike. For us to be presenting many new artists for their first time in the UK and Ireland as well as welcoming some back to C2C is fantastic. The growth of C2C owes so much to BBC Radio 2 and the Country Music Association of America – who are great partners on this festival with us.”

“CMA values C2C as an important vehicle for reaching and developing Country Music fans in the U.K. – especially as we enter the fifth year of our partnership,” said Sarah Trahern, CMA Chief Executive Officer. “We have seen significant growth in the U.K. market and have capitalized on the success of C2C to develop business relationships that have benefited the music industry, which is an important part of our mission. CMA is looking forward to bringing the CMA Songwriters Series back to C2C and sharing the artistry of the songwriters with their fans in London.”

C2C again brings the spirit of Nashville to the UK – with additional programming still to be announced including the Festival Stages for C2C ticket holders to enjoy – the Yamaha Music Stage, the BBC Radio 2 Stage and the official C2C Aftershows. Free to watch stages will also be back again at The O2.

Watch this space for more artist announcements and day splits to come plus news of The CMA Songwriters series lineup.