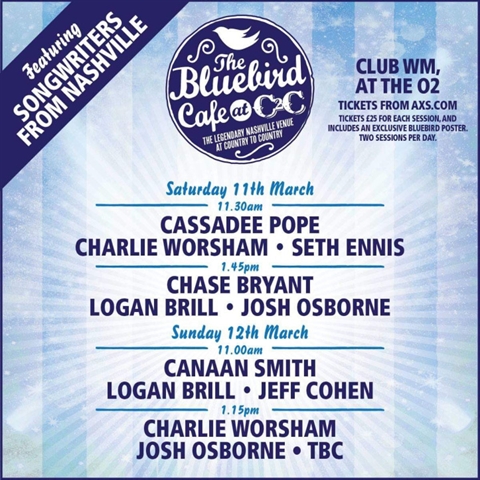 We are very pleased to announce that once again there will be a Bluebird Cafe @ Country to Country. This will be a daytime attraction featuring special performances by Nashville songwriters and stars.

Since opening its doors in Nashville in 1982, The Bluebird Cafe has become a world famous venue where up and coming songwriters and artists rise to fame and build careers. From the novice to the star, all levels of songwriters are welcomed and supported. Garth Brooks, Taylor Swift, Keith Urban and Trisha Yearwood took crucial early steps at this venue when they were unknown. It is regularly featured in the Nashville TV series.

The Bluebird Cafe @ Country to Country will be ticketed, late morning/early afternoon performances (before the main arena opens) in The O2’s listening room, Club WM at The O2.

The Bluebird Cafe at C2C
Two programming slots on Saturday and two on Sunday.