Home > Festivals > T in the Park announce stage splits for 2016

FacebookTweet
With just over 5 weeks to go until the biggest party of the summer, T in the Parkfestival organisers DF Concerts and founding partner Tennent’s Lager today revealed the stage splits ahead of this year’s festival, to help T in the Parkers prepare for a weekend of enjoying the best music around, creating memories with friends old and new, and experiencing the magic of T in the Park. 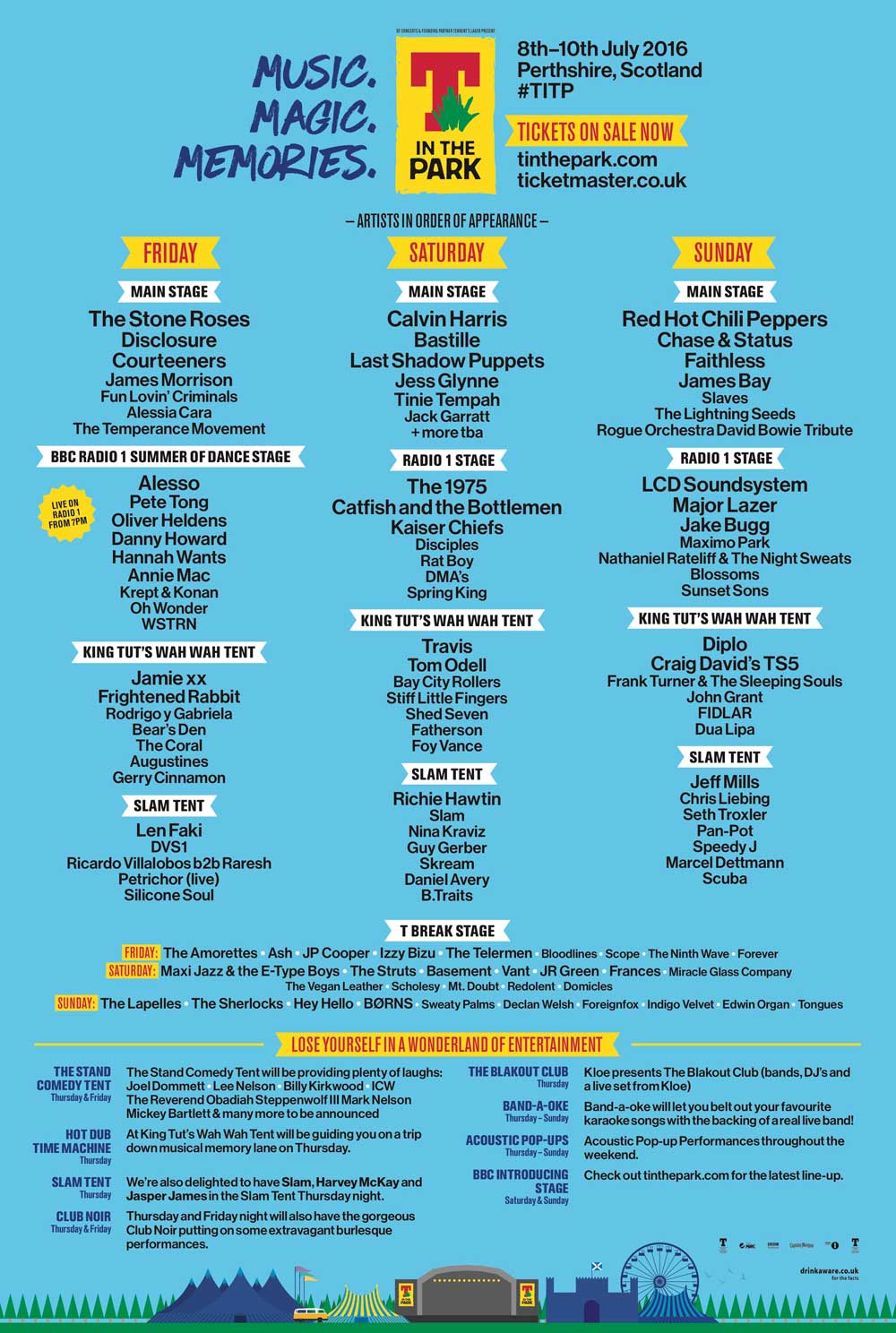 Also announced today were the exciting additions of Izzy Bizu, The Telermen, The Lapelles and Hey! Hello! to the T in the Park bill, joining headliners The Stone Roses, Calvin Harris, Red Hot Chili Peppers plus Disclosure, Courteeners, The 1975, Chase & Status, Catfish and the Bottlemen, Jess Glynne amongst many others at Strathallan Castle across 8th – 10th July.
Singer-songwriter, Izzy Bizu can count Sam Smith, Rudimental, Foxes and Jamie Cullum amongst fans, having supported said artists on UK tours as well as securing a coveted spot on the Brits Critics’ Choice award shortlist and the BBC Sound of… 2016 longlist. Her soul, funk, jazz and pop fusion is sure to go down a treat when she performs on the T Break Stage at T in the Park.
Glasgow-bred, indie-rock quartet, The Telermen, recently released their debut EP, “Organic”. The band features Dillon Squire (lead vocals, rhythm and lead guitar) whose father, guitarist John Squire, will headline T in the Park on Friday 8th July with The Stone Roses. With festival-worthy tunes including “I’m a Liar”, “Lonely Mind” and “Trust You” they will rock the T Break Stage this summer.
Having supported fellow T in the Park act The Last Shadow Puppets last night in Newcastle, and also joining Turner and Kane this evening for their Leicester show, Scottish five-piece The Lapelles are on the rise. Recently released track, “Grab Life By” was hailed by NME as possessing the “youthful swagger of Catfish and the Bottlemen”, with national airplay also secured from Radio X – catch them on the T Break Stage on Sunday 10th July.
Hey! Hello! are an international power-pop band formed by English singer-songwriter Ginger Wildheart. The band’s single “How I Survived The Punk Wars” was championed by Guns ‘n’ Roses’ Duff McKagan who commented in his Seattle weekly blog that the track was “perhaps the best and most real punk rock song in a long, long time. It actually stunned me”. They’ll bring their melodic tunes to T in the Park this summer.
Tickets for T in the Park 2016 are on sale now from www.tinthepark.com and remain at the same price for a fourth year running. T in the Park’s home Strathallan Castle is centrally located in the heart of the beautiful Perthshire countryside, approximately one hour away from both Edinburgh and Glasgow. Lying on an estate sprawling a massive 1000 acres, surrounded by beautiful woodland, the site has expanded for 2016 with the Main Arena now a quarter bigger in size and the campsite increasing by a larger amount.
FacebookTweet