For an act that has broken countless chart records, has one of the most enviable and loved catalogues in music, and performed in front of millions of people all over the world, today sees one of most iconic bands ever announce a career first. Rock royalty Queen + Adam Lambert will make their UK festival debut next summer as they are announced as the first headliner for The Isle of Wight Festival 2016 – their only UK show of next year.

Brian May said: “I think Queen at The Isle of Wight Festival is a date that was long overdue.  How incredible to take on this challenge at this point in our lives. With an injection of new blood in the shape of the incredible Adam Lambert, Queen will be ready to tear it up on this legendary stage in 2016.  Freddie would have loved it. Can’t wait.”

Roger Taylor said: “When I think of The Isle of Wight Festival I think of Hendrix, Dylan and The Who. What immortal company to be in! Queen are thrilled to be there and can promise a special night.”

Adam Lambert added: “I'm so excited to be a part of The Isle of Wight Festival and share the stage once again with the Queen family. I adore making music with Roger and Brian, and am thrilled to help continue their legacy into 2016. It is true I have large shoes to fill so I'm urgently planning on searching for a new pair of boots (or 5) to wear for the set.” 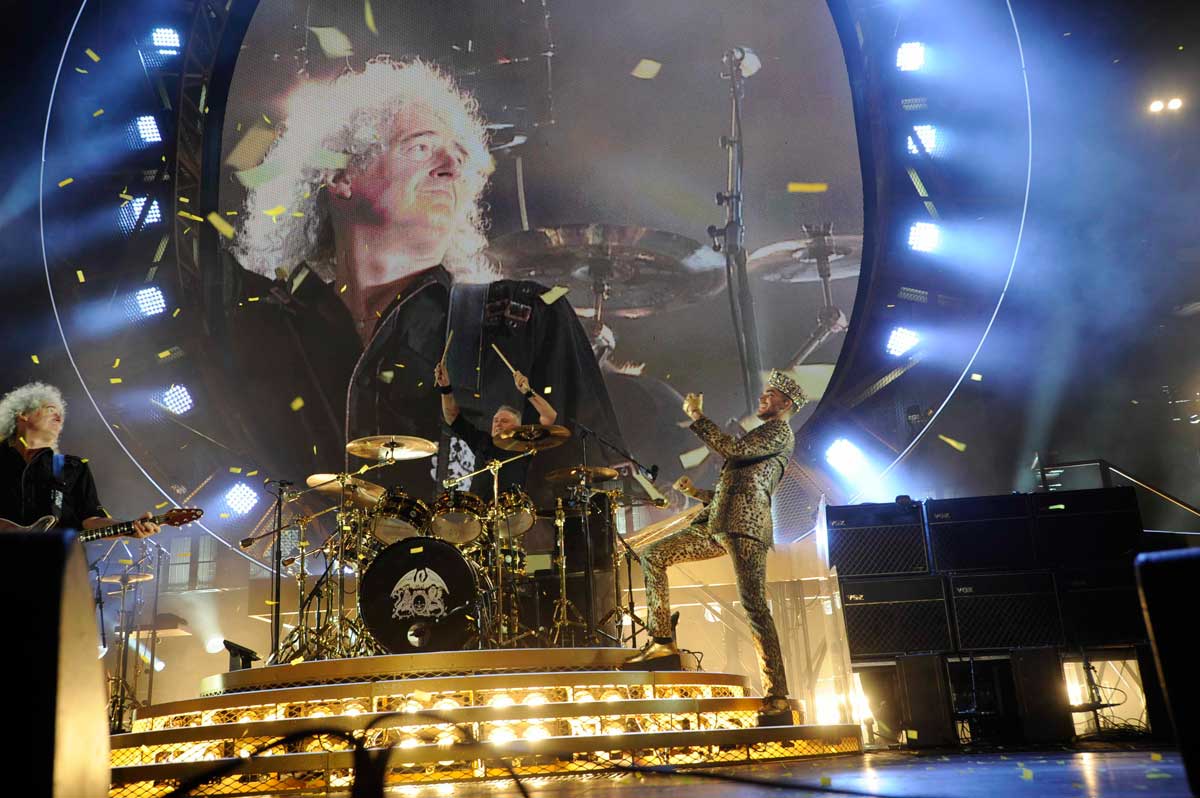 The band, who are currently celebrating the 40th anniversary of their record breaking worldwide iconic single, ‘Bohemian Rhapsody’, will close the festival on Sunday 12th June, just as the nation is united in honouring the otherQueen, with thousands taking part in street parties for Queen Elizabeth II’s 90th birthday the very same day.

Guitarist Brian May is himself no stranger to celebrating royal occasions, having played a major part in the Queen’s Golden Jubilee celebrations in 2002 by playing a spine-tingling version of ‘God Save The Queen’ from the roof of Buckingham Palace. The Isle of Wight itself also has well-established royal connections. Queen Victoria lived on the island at Osborne House, with next year marking 170 years since she first took up residence there.

Queen’s headline set on the final day of The Isle of Wight festival will be the perfect way to celebrate all things Queen on this momentous and historic weekend next June.

Festival boss John Giddings said: “It’s an honour for us to have Queen + Adam Lambert at our festival.  It’s the perfect way for us to celebrate our 15th anniversary. Queen’s music appeals to people of all generations and it’s hard to think of another band with such a famous collection of songs. It’s going to be an incredible moment for The Isle of Wight Festival when they share these songs with us.”

In an incredible career spanning four decades, Queen’s indelible influence is unrivalled, with a staggering list of awards, accolades and honours to their name including seven Ivor Novellos, an MTV Global Icon Award and two songs enshrined in the Grammy Hall of Fame. With record sales in the hundreds of millions of units – including their Greatest Hits collection which sold over 6 million copies in the UK alone, meaning one in three households owning a copy – and a string of No. 1 albums and chart topping singles, Queen are undoubtedly one of the UK’s most successful and best loved national treasures. With one of the most enduring song catalogues of all time, including ‘We Will Rock You’, ‘We Are The Champions’, ‘Don’t Stop Me Now’ ‘Somebody to Love’, and of course ‘Bohemian Rhapsody, their musical repertoire is second to none and the legacy created by Freddie Mercury, Brian May, Roger Taylor and John Deacon lives on through the ongoing work by May and Taylor, now joined by Adam Lambert.

Adam Lambert’s debut album ‘For Your Entertainment’ earned him a Grammy Award nomination for Best Male Pop Vocal Performance, and a worldwide smash hit with ‘Whataya Want From Me’. His second album, ‘Trespassing’, debuted at No. 1 on the Billboard charts. In 2013, Adam appeared as a guest star on the hit TV series, GLEE, and as a featured vocalist on Avicii’s album ‘True’. Adam released his highly anticipated third album, ‘The Original High’ this summer, it entered the worldwide chart at number 3, and took his overall worldwide sales to 2.5million. The single ‘Ghost Town’ has had over 100million streams worldwide including 37million views of the video. He has just announced his brand new single ‘Another Lonely Night.’

2016 will mark the 15th anniversary of The Isle of Wight Festival since it was successfully relaunched in 2002 to become one of the most exciting weekends of the summer, with a proud heritage of show-stopping headliners such as Foo Fighters, The Rolling Stones, The Killers, Paul McCartney, Coldplay, Blur and Fleetwood Mac.

The Isle of Wight Festival takes place 9th-12th June at Seaclose Park, Newport. From Main Stage headliners, acoustic sets, DJ performances and up-and-coming talent, alongside a huge variety of additional entertainment and activities such as the Bohemian Woods, Kashmir Café and Hipshaker, there’s something for everyone to escape from everyday life for that one weekend in June. Summer starts at the legendary Isle of Wight Festival, all the biggest names in music: one unmissable weekend.