With, unbelievably, less than two months to go until Download 2015, the finishing touches are being added to this year’s masterpiece of a line-up, and today sees twenty five more flashes of colour streaking the tableau of Europe’s biggest rock and metal festival.

Singer Matthew Davies-Kreye said: Download is a festival very close to our hearts and we're thrilled to have been invited back this year alongside some amazing bands.

Alaskan metalcore steamroller 36 Crazyfists are also basking in the glory of a huge new album, February’sTime and Trauma and will join FFAF in taking their place on the mainstage.

A long lost friend will also return as, amid reports that a new album is in the works, heavy metal titansCorrosion of Conformity, freshly reunited with vocalist/guitarist Pepper Keenan, come to Donington for the first time in twenty years having played Monsters of Rock in 1995, while a new friend arrives in the form of legendary Liverpudlian metallers Carcass give Download a first ever fistful of their mastery of every extreme genre from goregrind to melodic death metal.

For Carcass the appearance is the fulfilment of a long-held dream: Well, after years of badgering Andy Copping he has finally broken and agreed to let us despoil Download! We’re genuinely excited to finally get to play Castle Donington after all these years – maybe this time without rolling Landrovers and cracking shoulder bones on the journey there (a LONG story!). We hope to see some of you at a loose end, with no one better to watch at CARCASS’ ONLY UK festival appearance this Summer!

Corrosion of Conformity’s prodigal son Pepper Keenan was similarly excited about making along-awaited return: Super stoked about getting back to download with COC, always an honour. It's been waaaaay to long. Up the f***in hammers!

Another band to have a huge influence over their genre are pop-punk giants Yellowcard who make their first Download appearance when they headline the third stage on Sunday night.

One of the most distinctive and angry voices of their (or any) generation, crossover thrash frontiersmenSuicidal Tendencies play Download for the first time in five years following a(nother) hiatus and reunion, headlining the fourth stage on Sunday night.

Also making a long awaited return, having not played since 2009 are Gothic-ambient-alt metal sirensLacuna Coil, playing the main stage on Friday afternoon.

Elsewhere, homegrown supergroup Krokodil take their composite members’ most brutal musical sensibilities and crush them into some of the most soulsplittingly raucous groove metal on the scene, while another supergroup, this time from across the pond, Antemasque, features former members of The Mars Volta and At The Drive-In, blending the prog, funk and punk rock for which their progenitors were renowned to tumultuous effect.

Krokodil looked forward to returning to the site of one of their early triumphs: It's going to be so good to be back where it all began for us, so much has happened since our first show at Download 2013. Now the record’s out, it only seems right to be back there tearing sh*t up again with full f****ng force! Download, we're coming for you.

Sharp dressed Texas deathcore desperados Upon A Burning Body will return to Donington having been denied their Download appearance last year when singer Danny Leal was taken ill at the last minute. But will they join recent collaborator Ice-T on the bill for their recent Pop Goes Pnk smash, Turn Down For What? we hear you ask…

Leal looked forward to regaining his birthright: DOWNLOAD! We are excited to be on this year’s line-up. Having to cancel last year was so upsetting for us and we do apologize. We are pumped and ready to come see all of you guys and completely make up for last year. Come say hello and let's crush this year!

Another act who had to had to pull out of their 2014 performance but return in 2015 is September Mourning, the alternative rock sect of the eponymous transmedia Gothic culture project, who take to Donington for the first time ahead of the release of their debut album.

If all that doesn’t dust your fretboard, Finnish folk-prog goliaths Von Hertzen Brothers will also set off on their maiden Donington expedition following the release of epic album, New Day Rising in March.

Also gracing Donington for the first time will be Brighton hard rock-breakbeats crossover maniacs TheQemists fresh from the release of their new album Warrior Sound, whose fellow Brightonians, classic rockers Colour of Noise make their debut ahead of the release of their eponymous debut album in September, while Londoners LTNT are another act embarking on a first tour of duty.

Swedish-American banditos Blues Pills combine smoky blues with thunderous hard rock powered by singer Elin Larsson’s incredible vocals, while surf/skate punks Fidlar are another act due to make their Download debut this year, as are homegrown dub-rave-punk experimentalists Get Hot.

Coming from an even shorter distance are anthemic Derby rockers The Struts bringing with them a whole sackful of soaring choruses.

Blowing in from New Zealand to join compatriots Rival State on the bill come Like A Storm, who, as well as gaining a string of admirers for their mix of Spaghetti-Western swagger and hard rock steel, are one of the few rock bands to fully realise the awesome seismic power of the didgeridoo.

Country rockers The Cadillac Three are yet another newcomer, adding a touch of Nashville honky-tonk vibrancy to the cascade of rock anthems.

Arguably the easiest listening of the weekend (or hardest depending on your tastes) will come in the form of vocal harmonists The Lounge Kittens whose twist on rock and metal classic has earned them opening spots for Limp Bizkit and Steel Panther among others.

These incredible acts will join a pantheon of rock and metal gods at Download, including headlinersSlipknot, Muse and Kiss, main support Judas Priest, Faith No More and Mötley Crüe, and such other musical giants as Marilyn Manson, Slash, Enter Shikari, Black Stone Cherry and A Day To Remember. 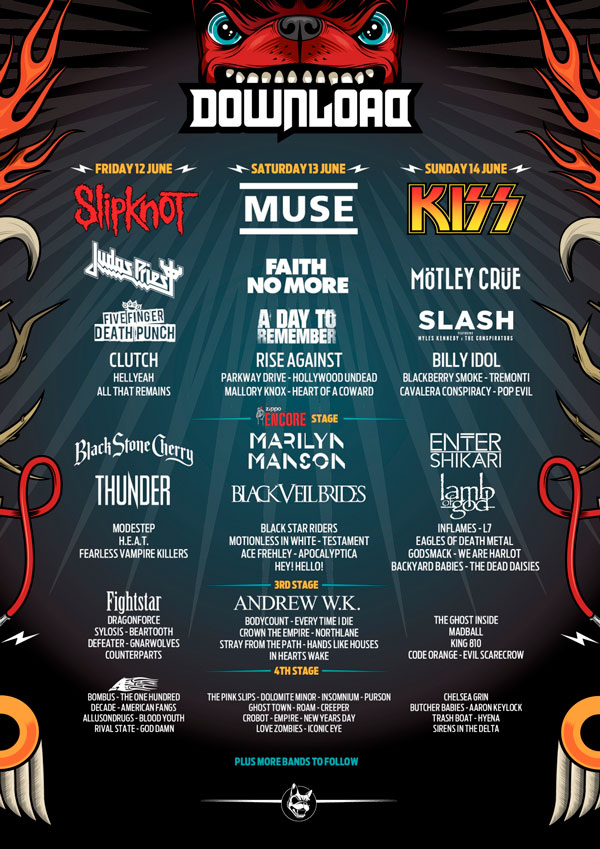